I went to a strip club with Alice Delysia 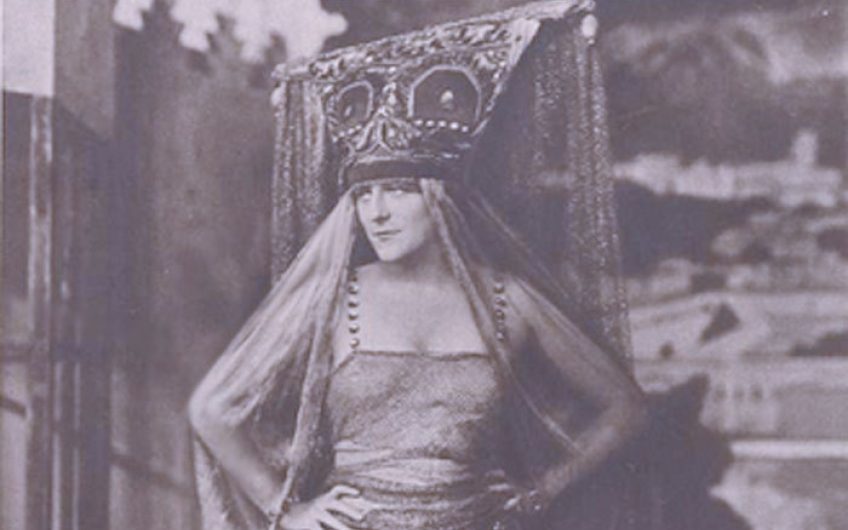 Alice Delysia, in "Afgar", from a 1921 publication. Photograph by Foulsham & Banfield, London
View Full Size
1
of 1

There can’t be many people left who saw Delysia on stage before the last war, but there must be a few who remember her when she toured the war zones as a member of ENSA. Born in Paris in 1889, she became a chorus girl at 14 and appeared in shows in Paris, London and New York. She was spotted by the impresario C B Cochran and in 1914 she was given a leading role in the first of his lavish West End revues. The show attracted the attention of the Lord Chamberlain in his role as theatrical censor because of a scene in which Delysia stripped, albeit in darkness, but is best remembered for her singing the unofficial recruiting song ‘Oh We Don’t Want to Lose You but We Think You Ought to Go’, wrapped in a Union Jack.

Between the wars she appeared in musical successes in London and on Broadway and made her first film. The young Noël Coward wrote his first hit song ‘Poor Little Rich Girl’ for her; she was incensed when Coward suggested Gertrude Lawrence should sing it in New York, and called him ‘a sheet and a bougairr’. (Her heavily accented English was part of her attraction for British audiences.)

After the Second World War she retired and married as her third husband René Kolb-Bernard, a cousin of de Gaulle’s, whose minor diplomatic postings included Consul in the Canary Islands. My father and stepmother lived there and they became friends in the early 1960s. I was then working for William Heinemann. My father told me that she was thinking of writing her memoirs, and I tentatively mentioned this at an editorial meeting. To my surprise the senior people round the table, including the hard-headed MD, Charles Pick, came over all sentimental and encouraged me to pursue the possibility.

The book would have to be ghosted and somebody suggested the semi-retired theatre critic Alan ‘Jock’ Dent. Heinemann paid for him to go to Las Palmas and get things under way. But the longer he stayed there, the more worrying my father’s reports became. The necessary ‘chemistry’ between Delysia and Jock was missing – he was far from being a ‘ladies’ man’ – and she seemed nervous about recounting the more intimate episodes in her life, including an affair with a Russian Grand Duke, which would fuel a publisher’s publicity campaign.

Jock came back with little to show. In the hope that a return to the scene of her triumphs might loosen her memories, it was decided to invite Delysia to join him in London. She agreed, and our publicity manager, Bill Holden, and I were told to keep in touch with her between her sessions with Jock. During her glory days before the war Delysia had been generous in her support, financial and otherwise, of ambitious young chefs and waiters from the Continent who now owned or managed some of the best-known restaurants. They showed their gratitude by offering her and companions of her choice lunch and dinner at their expense.

So it was that I found myself at the end of an excellent lunch in the Caprice discussing favourite songs with her. Suddenly she leant across the table and at the top of her still ringing voice sang me the chorus of Gershwin’s ‘Oh, Do it Again’. I have never felt such a mixture of delight and embarrassment.

On another occasion she took Bill and me to lunch in Leoni’s Quo Vadis in Soho. As we left she spotted a nearby basement strip club, then a relative innovation on the London scene. ‘Come on,’ she cried, ‘I have heard about your streep clubs,’ and she plunged down the steps, paid the ten shillings a head entrance, and led us into a shabby room, with a scattering of single men watching a sad-looking young woman gyrating on a small stage to recorded music.

After about ten minutes Delysia, whose figure was now matronly, rose to her feet and exclaimed, ‘I could do better than that.’ Bill and I looked at each other with horror since she was quite capable of matching deeds to words. To our relief she swept towards the exit, but all the way back to the office in the taxi she berated us for the poor standard of striptease on offer.

The memoirs never materialised, and I could but regret the marvellous launch party Bill would have organised. She spent her old age in Brighton and died there just short of her ninetieth birthday. You can still listen to some of her most popular songs on the digital music service Spotify.

What is it really like to run a pub?