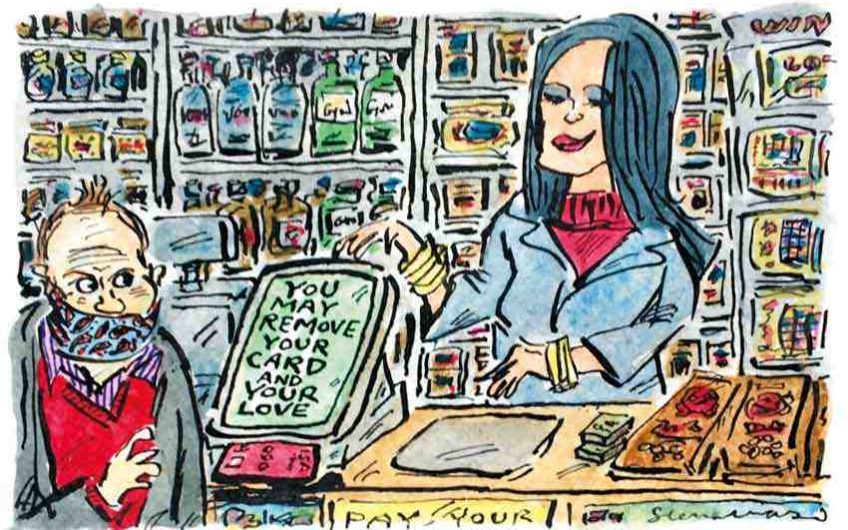 It happened at the Spar. Full of Balkan mystery, provocatively unmasked, she locked eyes with me over the canned goods. By Jem Clarke

Jem Clarke is in his very, very early fifties, is five feet zero inches tall and has never left the family home in Cleethorpes, which he still shares with his ageing, acidic parents. A lifelong loafer, he gives us his unique perspective on small-town life – and that perspective is looking up at everything and down on everyone.

I have many levers prompting me to find regular work.

First, there’s a miserable mother trying to inveigle me into pointless DIY projects such as a slope so she can get in through the backdoor more easily.

‘Let’s wait till you’re actually allowed to go out, before you start finding a way back in,’ I say.

Her constant rows with Father are pitched at the intensity level of 30-year-olds on the eve of the disintegration of a first marriage.

‘Where the hell did you put it this time, you old bat?’ he rages as he searches – irony noted – for a blood-pressure-reading machine.

Other things encouraging me to work include: the closure of all the cinemas and no income. But more than anything, it’s the shame of popping mid-morning into the Spar and seeing the glamorous, Serbian shop-owner nod at me knowingly as if she can see the stain of supported income on my soul.

Because her defiantly unmasked face has been the only whole one I’ve seen for some time, I’ve been quite taken by this middle-aged canned-goods key worker.

What makes her so memorable – a mysterious mix of mainland-Europe art-film unknowability and one too many online make-up tutorials? I worry that she wonders what a man like me is doing buying fizzy watermelon drinks in the middle of a working weekday.

When I pay, she eyes me suspiciously, with every elongated, sing-songy, Balkan-bounced syllable of ‘Thank-youuu-veeery-muuuch’.

I calm myself by thinking that, for all she knows, I could be a scholarly writer, semi-retired to the seaside for research reasons, rather than a chancy hack with a semi-regular column in a caravanning trade journal. She could mistake my paisley bandana-style face covering for the casual cravat of a true creative.

‘Your card, eez refused. You must put it een the machine,’ she says.

Her harsh words break the spell. Suddenly I’m all fumbling fingers as I try to remember a rarely used PIN based on the birthdates of two Hollywood icons – but in what order?

Tapping the machine, I explain, ‘I’ve probably used the card too many times this weekend. It was a mad one! Big weekend!’

Then I suddenly realise nothing has been open – no one in the country has had a big weekend.

Pausing, perhaps processing the selfsame thought, she suddenly says out of the blue, in that beautiful accent, words I shall never forget: ‘You’re now an author, right?’

I deflect in full and unconscious, mid-’90s, Hugh Grant-level fluffery: ‘Well, not quite an author, a few magazine articles, no books, no published books, that is, but, yes in many ways, you are correct, indeed, that is, what, I might, be, and indeed am…’

I look up to see her fingernail pointing down once more at the card-reader as she repeats with full, Bosnian-border-shattering clarity, ‘I said, “YOU ARE NOW AUTHOR-RISED.” ’

How those uncaring Mata Hari eyes bore into me, until I’m past the self-serve soft-scoop machine and safely out of the door. She must have concluded I’m some rambling, unemployed nutter, only one missed meal away from a shoplifting spree.

By the time I got home, I’d decided to redouble my job-hunting efforts, when a blood-pressure-reading machine flew past my head, and a calm middle-Englander voice said, ‘Sorry, I was aiming at your father.’

Later, I took Father to one side and asked him seriously, ‘Are we … is this … normal?’

‘He’s normal – you’re a layabout,’ my mother yelled from another room.

This particular insult has cropped up once or twice. I am happy to report that the extended family have agreed I’m more of a ‘sit-about’ – not moving in any meaningful sense, but upright at least.

My irritating friend the spellchecker

The Jeremy Lewis Prize for New Writing – how to enter