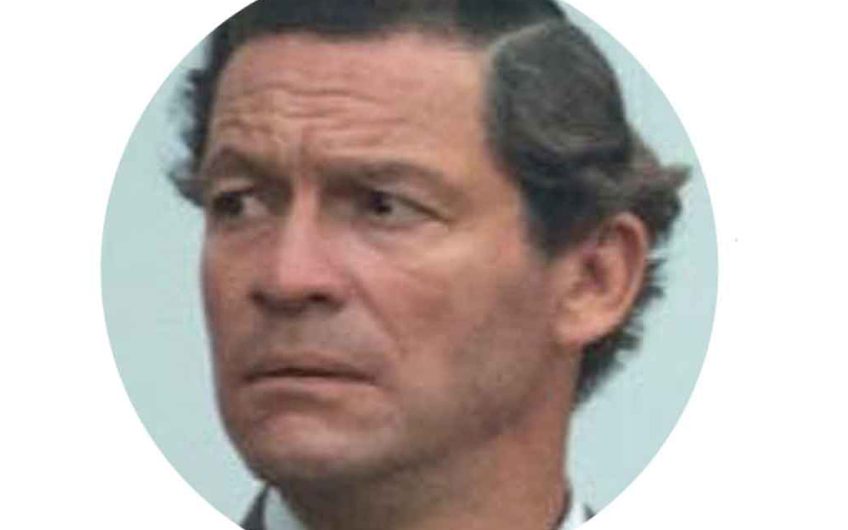 Dominic West, playing Prince Charles in The Crown, is filming on Aristotle Onassis’s yacht. But his heart lies in Ireland. By Louise Flind

Returning twice for things I’ve forgotten: keys, phone etc. I need to practise the old Russian custom of sitting silently before leaving the house, to avoid a chaotic departure.

Is there something you really miss?

The kids, the garden, the check-in deadline.

Yes. I try to take about half of what I think I need.

Glin Castle, Limerick, Ireland [the family home of his wife, Catherine FitzGerald]. It has turf fires, Irish breakfasts and the best pub in Ireland at the gate.

How are you finding running Glin?

Watching a suckling pig roast on a spit in Spain.

What aspects of Prince Charles’s voice and mannerisms are you concentrating on in The Crown?

Where’s it filmed and which houses are standing in for which royal palaces?

Do you want to play James Bond? How would you play him?

I’m too long in the tooth for Bond. But I’d love to play a villain.

How did you get on with Michael K Williams in The Wire?

He was a deeply sympathetic, wonderful man who helped a lot of people.

Is it right that your most enjoyable job ever was in a circus in South America?

It was a South American circus, but in Camden.

And your favourite place in the West Country, where you now live?

I’ve got a little patch of woodland at home which we’re replanting, and I’m digging a pond.

What’s your favourite place in Sheffield, where you’re from? Do you think of yourself as a Yorkshireman?

The Crucible Theatre and the Fat Cat pub in Kelham Island. A white rose blooms in my heart.

What’s the most exotic location you’ve filmed in?

I walked to the South Pole ten years ago with three teams of wounded soldiers. We filmed our arrival at the pole, led by two of the bravest: one blind, the other a double amputee.

And the least exotic?

The autopsy room in the basement of the coroner’s office in Baltimore. We filmed The Wire there quite regularly and always at night, with body parts in jars and tagged corpses in the fridge.

Who are you playing in the Downton Abbey film?

Yes. I started with a hitchhike across Eastern Europe the year the Berlin Wall came down, in the footsteps of Patrick Leigh Fermor.

I love it, but not for long without the family.

Do you go on holiday?

As often as we can.

Do you have a daily routine even when you’re away?

I can’t seem to get a daily routine anywhere.

Do you stay in a hotel or an apartment?

An armadillo. In Argentina. Roasted in its shell.

Do you tend to have a go at the local language?

What is the strangest place you’ve ever slept in while being away?

I had a strange night near Delhi with some sadhus at the top of a temple dedicated to the goddess Kali. She had a terrifying shrine where they sacrificed goats.

The overgrown garden, the pile of post, the tidy house and familiar bed – I love it.

What are your top travelling tips?

If the government advises against it, it’s probably a good idea.

A prayer for Easter Day