In the footsteps of Paddy Leigh Fermor - Dominic Green 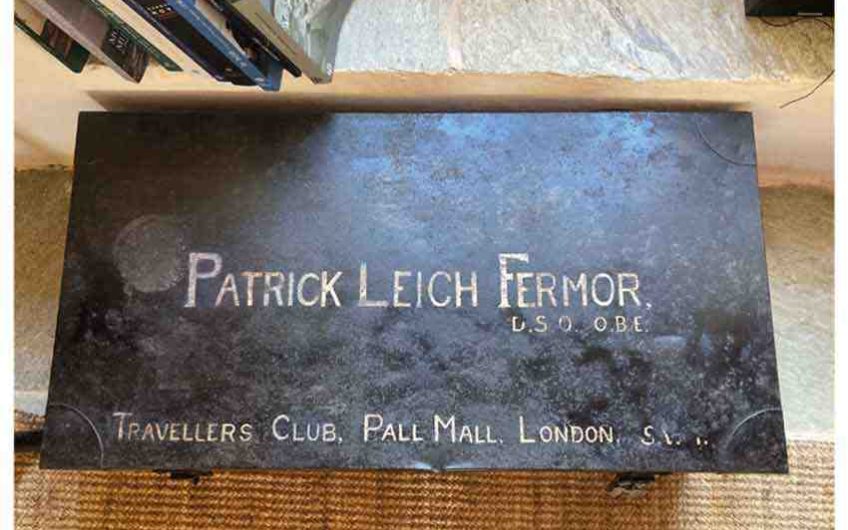 Double-jabbed and triple-delayed, the fearless travellers followed the curve of the Mani’s coast to Kardamyli, the little town where, in 1964, Leigh Fermor (1915-2011) and his wife Joan built a home on a promontory overlooking the sea.

The house fell into disrepair after Leigh Fermor’s death, but its inheritors, the Benaki Museum of Athens, have restored it and turned it into a unique holiday rental. It may be the nicest Airbnb in Europe.

I cannot confirm this, as I was sleeping next door in the Kalamitsi Hotel. But we did join the oldies on the spectacular terrace for drinks at sunset.

At dinner, I had an odd sense of déjà vu, and not because I had been there before. Then I remembered Richard Linklater’s film Before Midnight (2013), the third in his trilogy about the perpetually protracted romance between Jesse and Céline (Ethan Hawke and Julie Delpy), much of which had been filmed at Leigh Fermor’s outdoor dining table.

That table should not be confused with his indoor table. This was of Italian marble, designed by the man himself with reference to a church in Verona, and made by Venetian craftsmen. It stands in the centre of the large, book-lined room that John Betjeman called ‘one of the great rooms of the world’.

The books, now catalogued and fumigated, are still there on the shelves – some now protected by a wire trellis. The drinks are still waiting on the tray by the door. You have a feeling that you might be trespassing, or that Paddy is about to walk in and ask you some impossible question about the medieval Franks who, carving up the winnings of the Fourth Crusade of 1204, built castles in the Mani.

Three peninsulas hang off the bottom of the Peloponnese. The Mani is the middle one. The terrain varies from rough, rocky but surprisingly green in the north, where Kardamyli is, to very rough, entirely rocky and utterly dry everywhere else. The intrepid oldies set off for the baking interior the next morning, after pausing to meet our guide, Ruth Hackney, at the café in the plaka.

Ruth force-marched us uphill, through the village of Old Kardamyli to a spring marked by carvings of the Dioscouri, the twins Castor and Pollux. Their tombs, according to Strabo and Ruth Hackney, are located further uphill, at the village of Agia Sophia.

Even further uphill, we could see the Neolithic acropolis, the flattened hilltop which bears the earliest traces of settlement in the region. In only a few minutes, we had travelled back to the origins of civilisation.

Mercifully, Ruth refrained from making us climb up there, and instead directed us to a miniature citadel, the fortified redoubt of the rather violent clan who used to run the region. As it was now too late for a refund, that evening I subjected the group to a lecture on Leigh Fermor’s life and times.

The next morning, we set off southwards on a day tour of the Mani. We met Ruth at medieval Areopoli. It was here that the local uprising that turned into the Greek War of Independence began in 1821 – the bicentenary was celebrated this year.

Areopoli is a pretty town, but the relative affluence brought by tourism cannot fully mask the harshness of a dry region where fortified towers arise like cacti – most notably at nearby Vatheia.

The entire place feels as if it is on the edge of desolation, and that only near-superhuman effort has prevented everyone from leaving and the terracing and houses from tumbling down the rocky slopes.

An entire castle has been mislaid in the Mani: the Franks built three of them, but one, Grand Magne, has disappeared. In Mani, the 1958 travelogue in which Leigh Fermor introduced the Mani to the world, the missing castle is located by the salt pans of Tigane. We pondered these, wondered if the wide bay of Limeni might have made more sense, and meandered down to lunch at Gerolimenas, a tiny settlement in the bowl of a horseshoe bay.

We were back in time for a dip – a swimming pool has appeared in Paddy’s olive grove, and steps lead down from the terrace to a private cove. At dinner at Lela’s, the restaurant founded by Paddy and Joan’s housekeeper and run by her son Giorgos, there was talk of emulating Paddy’s habit of swimming around Merope, the island in the bay.

Our next expedition took us north, back through Kalamata and up into the hills to ancient Messene. Messene was founded in 369 BC by the Theban general Epaminondas. Having defeated the Spartans at the 371 BC Battle of Leuctra, he liberated the local helots and developed trade and political links with the coastal city of Pylos. That’s where Telemachus encounters Nestor, who had fought alongside Odysseus at Troy.

That inveterate Roman tourist Pausanias visited Messene sometime in the first century AD, and not much has been done to the place since. The excavations are extensive – Messene was host to a shrine to Asclepios and had two theatres. The site is impressively intact, but surprisingly unvisited.

The remains of Epaminondas’s five-mile fortified wall still snake along the ridge that sets the city inside its own, natural amphitheatre. The Arcadian gate still stands across the road to the north, and the road from the north still runs through it. Pausanias does not mention jumping aside to avoid being run over by a taxi. It was only by luck and youthful adroitness that the full complement of oldies made it to lunch at a restaurant in a village above the site.

At some unreasonable hour the next morning, Ruth dragged us up into the foothills of the Taygetus Mountains to inspect the remote villages that cling to the edge of the Viros Gorge. Prophet Elias, the highest peak in the Taygetus, lowered overhead.

It was here that Leigh Fermor’s Mani begins, as Paddy and Joan stagger out of the gorge and into the village of Kendros, and it was there that our odyssey ended – almost.

Many literary-historical exchanges have taken place on Paddy and Joan’s terrace, but few have reached the Empyrean heights of quiz night with the oldies. The party divided into two teams, the Spartans and the Corinthians, pitting husbands versus wives. The Corinthians won, and brushed off Homeric accusations of cheating and marital betrayal. Dinner was a Homeric affair too: lamb was roasted, and the oldies impressed our hosts by despatching every bottle of wine in the house.

The Byronic mood was contagious. On our last morning, I rose to discover that a handful of oldies were at sea, midway through a mad attempt to swim around Merope. Fortunately, the only sirens we heard were mythical, and not those of the ambulance service from Kalamata. The tales told over our last lunch were tall.

What is the Royal Warrant Holders Association? - John Shepherd

End of the line - Benedict King on giving up commuting