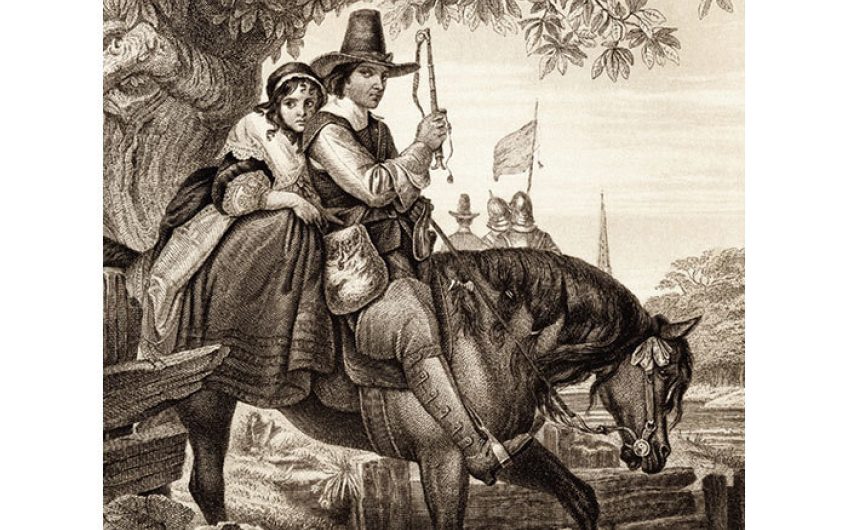 Today in 1651, Charles II lost the Battle of Worcester. Disguised and exhausted, he was pursued by Parliamentary troops for six weeks, for 600 miles. As Sam Swire walks the Monarch’s Way, he crosses beautiful, remote English landscapes

It was a gruelling, six-week journey through six hundred miles of rural England, as Charles II travelled the country, in disguise, in a desperate attempt to get to a port and a boat to the Continent. In recent years, I’ve been following in his footsteps.

Charles II’s escape began on 3rd September 1651. As Cromwell’s army pushed his forces back on two fronts, a 21-year-old Charles II realised his hopes of winning the Battle of Worcester and reclaiming his throne were lost. He had brought an ill-equipped army down from Scotland to seize victory and bring a swift end to the Interregnum.

As this hope faded and the enemy advanced, some of Charles II’s most loyal followers led a final charge down Worcester’s high street to give him time to escape. He did so by riding north, with no firm plan, odds stacked against him.

Charles II spent the night journeying through unknown country, desperately trying to shake off the very visible horde of soldiers who escaped with him.

He managed to break away with a small group of men, and so began a crucial, little known episode in English history; that epic journey. Charles achieved this aim thanks to his brave supporters and his sharp wits. It was fortunate that the first family he was led to – the Penderels – were loyal to the Crown and proved resourceful in a moment of crisis and real danger.

As recusant Catholics, they were not supportive of the Puritan parliament then ruling England. More importantly, they had experienced the restrictions placed on their religion at the time. Catholics required permission to travel far; so they were no strangers to disguise and artifice. More than once, Charles made critical use of their priest holes.

Charles first tried to cross the Severn into Wales, but found it too heavily guarded. After the famous night in an oak tree – subsequently nicknamed the Royal Oak – in Boscobel, Shropshire, with Roundheads searching the wood below him, he was taken to a house in Staffordshire belonging to one of his supporters, a Colonel Lane.

From there, he travelled to Bristol, disguised as a servant accompanying the Colonel’s daughter, Jane Lane, who had a pass to visit a friend nearby. Later on, he would tell colourful tales of lodging in the servants’ quarters of inns and the close shaves he experienced. Once, he was questioned by a cook for not knowing how to set up a roasting spit, to which he swiftly replied, ‘I am a poor tenant’s son. We seldom have roast meat.’

Further travelling took him into the West Country, before heading east, in a series of attempts to find a suitable boat and crew. Eventually, he sailed from Shoreham for France, beginning more than eight further years of exile.

Sources are not plentiful. Pepys recorded an account that he heard direct from the king ten years later, and the episode is mentioned in his diaries.

Charles II himself made much of his escape in the years following his Restoration in 1660. He had, after all, been the first English, or British, monarch to spend time living among his own people. He recognised it as the character-building experience it undoubtedly was.

But one can imagine that ten years in the telling may have altered some of the detail, and a cautious historian might accept some embellishment to the story as a given. This amiable king was probably not afraid to embroider the truth in pursuit of a good tale.

A certain amount can be pinned down as fact. For one, while we cannot know his exact route on each day, we do know where he spent every night of those perilous weeks. Armed with this information, an enthusiast, Trevor Antill, founded The Monarch’s Way in 1994. Using existing rights of way, he traced Charles’s full journey.

A small but growing band of diehard fans have kept the route alive. It is now marked on all Ordnance Survey maps, and Antill, who died in 2010, wrote a three-volume guidebook, helpful and erudite, available to buy online. There is an association with free membership. The newsletter lists all new members, with overseas ones highlighted in red. Those who finish the walk are known as ‘end to enders’, currently numbering 75 people, and a great deal of hard work is done by volunteers to keep the route clear and waymarkers visible.

I am 120 miles into the journey, after a year of intermittent walks, and always find myself looking forward to the next segment with excitement. You don’t have to be a committed student of the Stuarts to enjoy the many things you see en route.

It’s surprising how many relics of his journey remain, not least the Royal Oak at Boscobel (or at least its grandchild; saplings available in the gift shop). Many of the houses in which he stayed, though altered, are open to the public.

But the real attraction is the route itself, and the parts of England it takes you through. Unlike most national walking routes, there is no slavish devotion to beauty spots or natural wonders; only historical fact.

Where Charles would have been travelling through largely remote countryside, a pair of revolutions – agricultural and industrial – have often imprinted a very different stamp on the path he took. A day might start with a few miles through seemingly untouched woodland, zig-zagging through the rural soul of England, and finish with a stretch along a Victorian canal, passing the back gardens of West Midland suburbs.

My next stretch will take me through the Netherton Tunnel, a straight canal tunnel nearly two miles long and opened in 1858, before breaking south-east to Stratford-upon-Avon and thence a diagonal route through the Cotswolds.

Thereafter, the route heads south through the Mendips and down to Bridport in Dorset – scene of the king’s first attempt to get a boat to the French coast (the captain engaged for the task was ignobly locked in his room at the appointed hour by his terrified wife).

The route then pushes east across the South Downs, ending in the port from which Charles and his companion, Lord Wilmot, escaped on 15th October 1651.

An added bonus has been reliving prep school geography lessons. At last I have reason to understand the difference on a map between a church with a spire and one with a tower; and hunger and thirst on a warm day are rewarded by finding the symbol for a pub.

The association’s website is full of all the information required for anyone wanting to walk all or part of the route. There are some helpful books, too: Richard Ollard’s The Escape of Charles II is a quick read and one of the first to pull all the various threads together.

The Monarch’s Way is never going to become a national walk favoured by those only wanting to soak up the beauty of England. But anyone with historical interest in the country’s development will not be disappointed by this journey.Explaining it to some people can be troublesome (‘When did he get to Skye?’), but there is so much of interest in the story it’s easy to enthuse others about it.

Not everyone approves. After a particularly long day as I hobbled to my B&B for the night, I walked past a barge with a King Charles spaniel snoozing on the roof. As I passed, it lifted its head, curled its lip, and growled gently until I was safely gone.