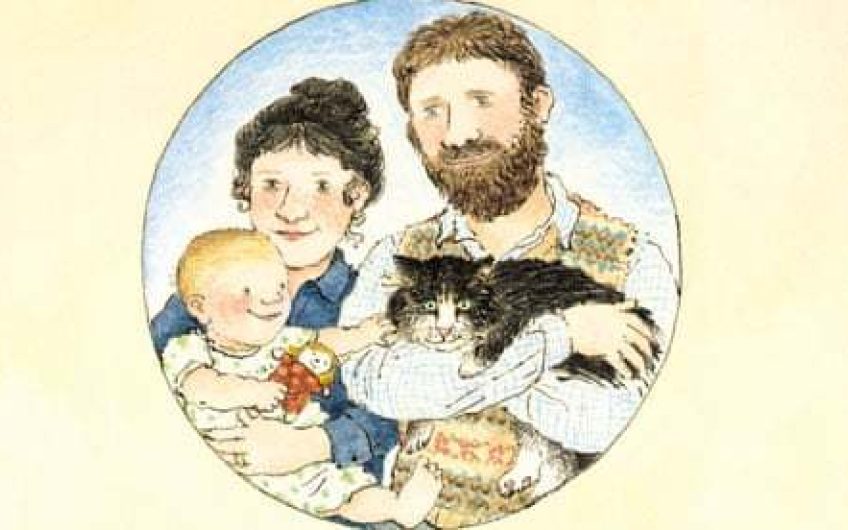 25 years ago, the children's author Janet Ahlberg died, aged only 50. Andrew Watts – and his son – adore her books

On the back of Peepo! - one of my son’s favourite books until, with the unsentimentality of a five-year-old, he put away childish things - the author’s picture is an illustration by Janet Ahlberg, who died 25 years ago on 15 November, 1994.

It is of her, the illustrator, and her husband, Allan Ahlberg, who wrote the words, as well as a baby (quite obviously the same baby as the one in the book) and a cat. It is drawn in Ahlberg’s familiar style - soft lines and gentle colours but gorgeously detailed - and captures the reason for their books’ popularity: they are not just children’s books, but family books.

Take Peepo! for example. It’s a book about a day in the life of a baby, shown from the point of view of the baby - with peepholes in the pages so that the child being read to can play “I spy” on to the next page - but the illustrations are as rich with period detail as an Alan Bennett memoir: it is set in a working-class house during the Second World War, presumably where Allan Ahlberg grew up, but this is nowhere mentioned in the text. (Ahlberg has confirmed the autobiographical element in interviews, adding that Janet spent months studying the Army and Navy Stores Catalogue 1939-1940 to get the jugs or the bread bin just right.)

Any adult will appreciate the nostalgic specificity - the uniforms, the barrage balloons, the mirror with the rainbow rim just like the one my grandmother had - but a child can focus, like the baby protagonist, on the teddy and the ball. Or, if a little older, he or she may ask why the bath was in the sitting room and what those odd-shaped balloons are doing; like all the Ahlbergs’ books, it is for sharing.

Even the books for older children - like the Ha Ha Bonk Book (“Ha ha bonk” being, as every schoolboy knows, the sound of a man laughing his head off), which was passed around like samizdat literature at my primary school - might at first look like books for reading alone; but the jokes are divided between Jokes to tell your Mum and Jokes to tell your Dad. (“If you want to tell your dad a joke, choose a good time. For instance, catch him early in the morning while he is still in bed.”) The Ahlbergs’ books always seem like gifts to your family from their family.

Their partnership started by accident. While Janet and Allan Ahlberg had met at teacher training college in Sunderland, Janet found teaching uncongenial and started work as an illustrator, usually of non-fiction books. According to her daughter, Jessica - the baby in Peepo! - she finally snapped when asked to draw Simon the Superior Safety Pin, and begged her husband to write a story for her instead. And he did. Thirty-seven books followed, each of them delightful works of art - the Ahlbergs never forgot that books were objects, as well as vehicles for a story - with instantly recognisable illustrations. Mothers are always homely and plump; dogs are always small white terriers - even when they are skeletons - and babies are chubby and smiling. Children have button noses; grown-ups pendulous proboscises.

You might call it Magic Domesticity: if a fairy-tale character appears, he or she will end up having or offering a nice cup of tea. (There is a huge amount of tea-drinking in the Ahlberg Universe.) The Jolly Postman is their most successful book - unlike most of the others, it came out too late for me to enjoy as a child, largely because the Ahlbergs spent five years getting the publishers to agree to having envelopes children could actually pull the letters from - and illustrates this perfectly: a postman on his bicycle, in mid-20th century Royal Mail uniform, delivers letters from, say, Goldilocks to the Three Bears, and drinks a cup of tea at each house.

If they are cosy, however, the books are not reactionary. Mothers have jobs, often as burglars; babies are commonly fed by their fathers or other male characters - who knew Robin Hood was a new man? - and Sophie’s classmates are Errol and Sushma as well as Robert and Alison.

Allan Ahlberg is still writing - The Goldilocks Variations (2012) was presented to my son by his godmother, an Oxford don, as “a child’s introduction to postmodernism” (as if that was some sort of recommendation) - but even when, like this book, they are illustrated by Jessica Ahlberg, whose style is reminiscent of her mother’s, especially in the noses, they lack the simple joy of the original Ahlberg partnership.

As Allan Ahlberg himself said, “Just because a book is tiny and its readers are little doesn't mean it can't be perfect. On its own scale, it can be as good as Tolstoy or Jane Austen.” And some of the books he made with Janet Ahlberg are quite perfect in this way.

As the bombs rained over London, the Queen Mother charmed evacuees. By Laura Grenfell

The strange beauty of architecture without people