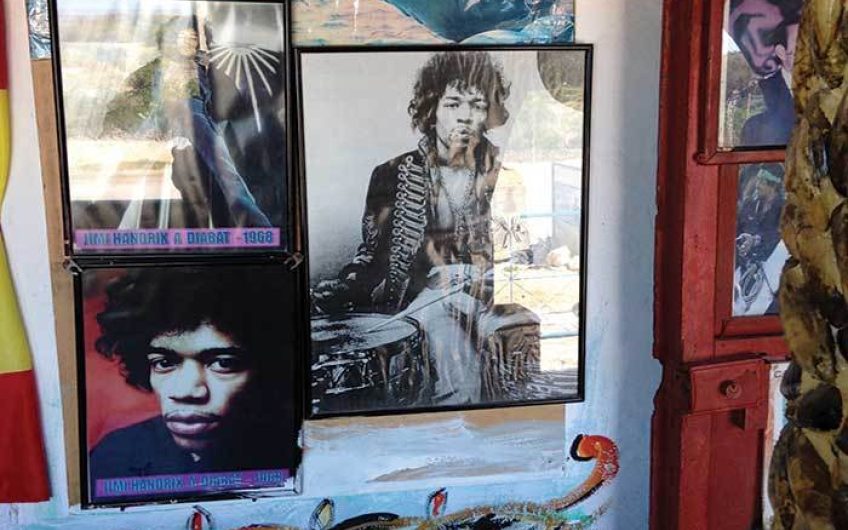 The legend of Jimi Hendrix in Morocco still seems to be expanding. The rich tourist folklore would have us believe that the world-slaying guitarist once landed there in a private plane, travelled extensively – often sleeping in tents – played concerts, fathered several children, spent $20,000 on clothes and rugs, wrote Castles Made Of Sand after visiting the ruined fort on the beach at Essaouira and then tried to buy the neighbouring island of Mogador and start a commune with Cat Stevens. Judging by the number of hotspots, hotels, restaurants, guitar shops and cafés he patronised, he must have been there for months.

The truth is a little more prosaic. Hendrix did visit the country briefly, arriving in Casablanca on a flight from Paris with two male friends in the summer of 1969, a full two years after releasing his ‘Moroccan-beach-inspired masterpiece’, and he hired a car and driver. Hard facts are thin on the ground, but there’s proof that he stayed at the Hôtel des Iles outside Essaouira’s old city ramparts and, as I was nearby, I thought I would check in too and test out the famed Hendrix Trail. Being one of the few places that could genuinely claim a connection, it seemed bizarre that three of its staff had never heard of the man, while a fourth packed me off to Diabat where he’d supposedly appeared on stage. There’s no concrete proof that he ever set foot in this sleepy Berber village five miles away but that hasn’t stopped two hostelries springing up in fierce competition to keep his lucrative flame alive.

The first is Hôtel Jimi Hendrix, a charming ramshackle place whose studiously observed wicker lampshades, violet scatter cushions and striped silk sofas have the ‘psychedelic boudoir’ air of a Sixties period film set. You half-expect the ghost of Brian Jones to wander in wearing a huge felt hat. The bohemian Swiss owner showed me rooms at the top of her mosaic-filled riad with a view of ‘the actual Sultan’s Palace’ where Hendrix had performed – though the sheer volume of his guitar-playing seems to have taken its toll as the pile has long been a weed-covered derelict, with camels lumbering past when I strolled over to photograph it. A cab pulled up at the hotel’s roadside bar and some Dutch long-hairs stumbled out, magnetised by the notion of spending a night listening to Purple Haze with a herb-scented cigarette beneath a blanket of stars while bathed in the romantic possibility that its author might have drifted through this dusty outpost some 45 years beforehand.

The rival concern is Café-Restaurant Jimi, a fragrant set-up run by a fractious Moroccan in his late sixties who, untouched by his establishment’s peace-and-love propaganda, demanded money from me when I took a snap of the place. Attention to detail wasn’t a high priority either – the famous visit was in 1968, according to the story daubed on its walls, the song had become ‘Castle of the Sand’, and one of the portraits of Hendrix looked more like James Brown and the other like Bob Marley. If someone opened a John Lennon memorial café in Liverpool and got his song titles wrong, I doubt you would get a lot of custom.

I wandered off wondering whether this was naked exploitation or just the gentle rhythm of tourism’s supply and demand. If a load of willfully gullible travellers actively want to believe their chosen rock god once set foot somewhere hot – and demand a place to celebrate the fact – then you can’t really blame the locals for supplying one.

AN Wilson – Must Darwin fall?