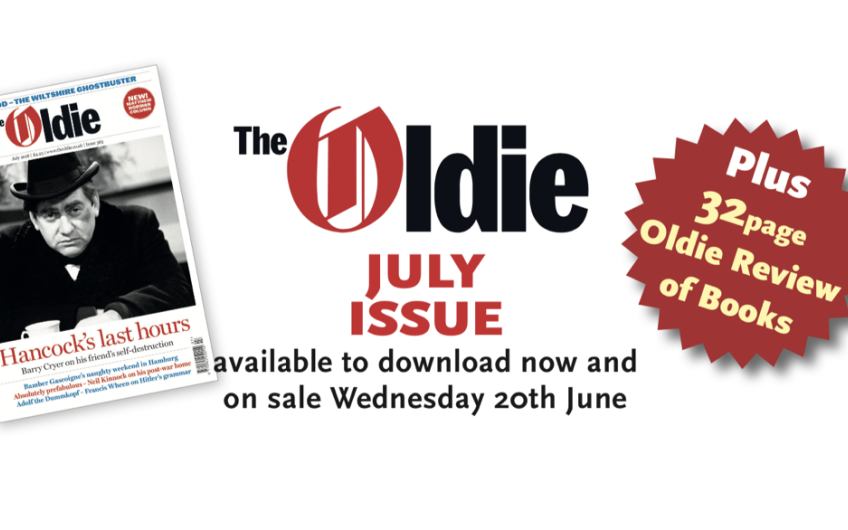 Welcome to the July issue of the magazine, packed with fresh, gripping, first-hand accounts of the great, the good and the downright evil. Harry Mount, Editor, The Oldie

50 years after Tony Hancock’s suicide, Barry Cryer recalls how his old friend discarded his writers and co-stars, and ended up discarding himself

Anne Robinson on the brilliance of Norman Scott

The Weakest Link star recalls her strong affection for Scott in the 1970s, when he advised her on wine, game and the art of exquisite interior decoration

Neil Kinnock on the joys of growing up in a prefab

Josceline Dimbleby on her idyllic road to Damascus

AND a 32-page Oldie Review of Books supplement, the ultimate round-up of the reviews. See the full table of contents here, with all our regulars, book and arts reviews.

Plus, listen to new interviews for the July issue with Barry Cryer on Tony Hancock. Barry recalls the comic genius of his friend, and how Hancock discarded his brilliant writers before finally, tragically discarding himself. Listen here.

Roger Lewis looks back on his journalism and books, and discusses his unique, sardonic, comic style. He also unlocks the characters of Peter Sellers and Laurence Olivier in a discussion of his ground-breaking biographies. Listen here.

Plus, listen to the the talks from our recent Literary Lunch on June 5th at Simpson's-in-the-Strand.

Lady Antonia Fraser was in conversation with her cousin, Harry Mount (both, pictured below), on her book The King and the Catholics: The Fight for Rights 1829 . Listen here.

Angela Levin, fresh from reporting on the Royal Wedding for CNN from 4.30am until 9pm, revealed extracts from her royal biography Harry: Conversations with the Prince. Listen here.

Charles Duff stood in to replace his cousin John Julius Norwich, who was forced to step down due to ill health. An actor and lecturer in Shakepeare and theatre history, he entertained and enthralled talking about his memoir, Charley's Woods published by Zuleika. Listen here.

Below you will find links to five FULL teaser articles but other highlights include.....

Latin epitaphs for pets John Davie I was a prefab sprout

Death of the Romanovs Frances Welch

Socks – and sex – just get in the way – Raymond Briggs

Yes, we have no servants... – Letter from America, Dominic Green

Whatever happened to 'thank you'? – Gyles Brandreth’s Diary

Celebration of celluloid – Postcards from the Edge, Mary Kenny

The past is on the cards – History, David Horspool

So many flowers grow in an English urban garden – Town Mouse

Getting Dressed: From high chair to high table – Brigid Keenan

I just want to rock... in a comfy seat – Golden Oldies, Rachel Johnson

That was no misprint – it was a mispaint – Words and Stuff, Johnny Grimond

Lampedusa Cross is a sign of our times – God, Sister Teresa

How to check up on the credit checkers – Money Matters, Margaret Dibben

Screening is key to health of the nation – The Doctor’s Surgery,Tom Stuttaford

Francis Wheen on Dictator Literature: A History of Despots Through Their Writing by Daniel Kalder

Alex Clark on Figures in a Landscape: People and Places: Essays 2001-2016 by Paul Theroux

Valerie Grove on Girl With Dove: A Life Built By Books by Sally Bayley

Theatre – Red at the Wyndham's Theatre and Consent at the Harold Pinter Theatre, Paul Bailey

Drink – A view to a swill, Bill Knott

Oldie Review of Books – 30-page Round-up of the reviews

Last month's most listened to
1. Paddy the Great, king of Greece – John Julius Norwich in conversation with Harry Mount, on the topic of his good friend, Patrick Leigh Fermor – the legendary travel writer
2. Paul Atterbury and Marc Allum on 40 Years of the Antiques Roadshow, Hugo Vickers on his strife with the big-budget Netflix series The Crown and John Tusa on his motley career at the April 2018 Literary Lunch
3. Oldie Literary Lunch: Barry Cryer and his Parrot Jokes