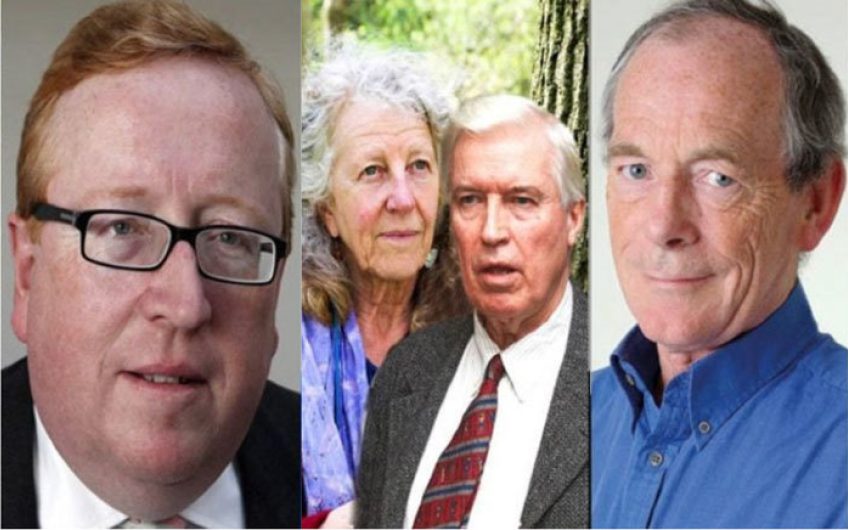 After Barry Cryer’s parrot joke, the talks got underway.

Simon Heffer spoke first. His latest book, Staring at God: Britain in the Great War, is another in his series on the most important century in British History, the 101 years between 1838 and 1939.

It considers the role of women, explaining how they were far more than the munitionettes of popular imagination, the elevated rate of delinquency among the young – as there ‘were no fathers to clip them round the ear’ – and the political establishment’s poor handling of the war.

Asquith, who was PM at the start of the war, struggled so much on the first day of the conflict that in the afternoon he went to his club and read a Jane Austen novel. Heffer was quick to note that Asquith’s successor, David Lloyd George, another struggler, was nothing like our present PM – he was an adulterer and a liar.

Carry Akroyd and John McEwen then presented a slideshow about their fantastically successful book, A Sparrow’s Life’s as Sweet as Ours.

John McEwen, one of our mag’s founders, went first. The book, he explained, is proof of a lesson he learned from a master at Harrow, ‘no time is ever wasted by staring out of a window’.

He outlined the bird infested history of the Douglas-Home family: how Sir Alec had managed to down a woodcock while on a shoot, the unfortunate bird fell into the passing Flying Scotsman and was left at Berwick-upon-Tweed train station for him to collect; how Henry Douglas-Home had mentored him into the bird watching trade; and how William Douglas-Home had snuck onto one of Henry’s nature documentaries by perfectly imitating the sound of a bird. On another note, John Douglas-Home’s brother was the first person to give McEwen a proper drink – at the age of six!

Carry Akroyd, the illustrator of the bird of the month column, gave us an insight into the artistic process. Every feature on each painting is cut out using a scalpel or a pair of scissors, it is then pressed with the colour to create the illustration.

The book may be about birds but the setting of each bird is just as important, explained Akroyd. The chiffchaff for instance is a tiny bird very rarely seen but much more frequently heard, so the bird is significantly less prominent in the image. Another example of the importance of background is the great bustard, which features in the background a great bustard in the middle of a mating display.

In his talk on A Short History of London, Simon Jenkins focused on the sheer blind stubbornness of our fair capital. London has never done what it was told to do, he remarked.

The free market always prevented it. The Romans built it on a grid system, as their other cities. After they abandoned it, London was deserted. When it was finally re-occupied it became a market garden following the street plan of a farming town.

And since Alfred the Great formalised a plan for it, the city hasn’t changed shape. After the Great Fire, half a dozen architects including Wren and Evelyn submitted plans to completely change the shape of the city, aiming to make it more like continental capitals. But to no avail; the odd labyrinth of streets and alleys didn’t become rolling boulevards. The city corporation made sure of that.

The free market and the luxury of Britain’s island status meant that London could grow unimpeded by the need for a wall and outer defences, not something afforded to Paris or Vienna. Cartoons from the nineteenth century often show London’s streets in the form of militarized divisions firing bricks and mortar at the green fields of the countryside.

Jenkins left us with the image of the City of London as it is now, skyscrapers of steel and glass. It was this view that he once showed to an Italian friend from Rome. He quotes his friend as saying, ‘I come from the world’s most corrupt city - even we wouldn’t be allowed to do this’.

Simpson’s, as usual, provided a magnificent feast. And many thanks to Noble Caledonia for ensuring our lunches stay so reasonably priced.

The sheep of New York