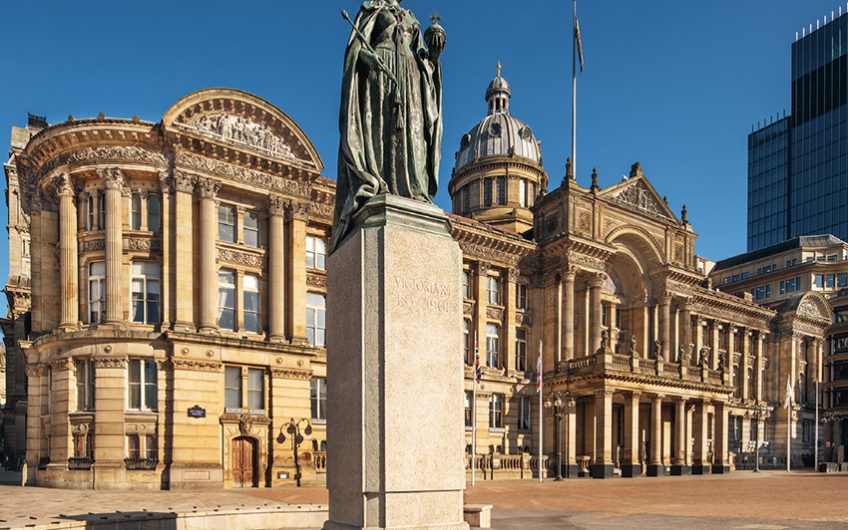 In the days when the floors of two-room pubs were glossy with freshly hawked Dudley oysters and the markets sold blewits and pies, the Black Country really was black with soot, with the issue of belching chimneys.

Furnaces, foundries and forges abounded and many of the area’s buildings acquired a patina of smuts. As industry declined in the 1960s and ’70s, many of its factories were demolished while others, constructed of impervious materials, were cleaned to the point where they looked brand-new. Those faced in terracotta resemble the late Peter Bull; they take on an appearance of glaring ferocity far from the mournful mien of widow’s weeds.

My revenant grandfather (b. Oldbury, 1880) would recognise very little of what actually remains – though Edwin Bayliss’s paintings of night lit by flame and of miners and chainmakers trudging beside poison canals would be instantly familiar. So, for that matter, would Constantin Meunier’s depictions of le pays noir around the sinister Walloon city of Charleroi – destitution and pneumoconiosis are international. So is sprawl.

In the pre-penultimate entry in his revised and massively expanded version of parts of the Warwickshire, Worcestershire and Staffordshire Pevsners, Andy Foster notes of Shirley Golf Club that the clubhouse is the work of John Madin, the most prolific and perhaps best of the city’s architects in the latter half of the last century. The club was founded in 1956 by the Birmingham Jewish Golf Society, ‘whose members had been refused entry to clubs elsewhere’.

That was in 1956. Foster writes that Shirley is ‘a modest hamlet which has become an unending c20 suburb’. That description could apply to scores of places in this unwieldy conurbation, whose very boundaries are a matter of dispute.

This is a part of England that is characterised by ribbon development, piecemeal intrusions, weird struggles of scale and style, terrains vagues, edgelands that aren’t edgelands because they are near the countless centres and, of course, sprawl usually prefixed by ‘relentless’.

Should we wish to learn anything from Brum, it is that sprawl is far from uniform and is rich in clashing oddities. Coherence is not a property of attractive urbanism; collisions are more exciting than elisions; there is pleasure to be had in bewildering juxtapositions.

There are four Iranian restaurants within a minute’s walk of the Oratory where Cardinal Newman received Gerard Manley Hopkins into the church. It is certainly at odds with most of the city’s contemporary ecclesiastical architecture. Newman wrote, ‘Gothic is now like an old dress, which fitted a man well twenty years back but must be altered to fit him now. I believe that Gothic can be adapted … Mr Pugin does not.’ Foster calls the Oratory ‘tremendously Italian … marble everywhere’.

It is, however, Gothic that is everywhere in this surprisingly green agglomeration. The Sligo architect J M Derick’s St Mark’s, Pensnett, is a magnificent beast of a barn, in an almost bucolic setting. It is illustrated here with an engraving by James Colling, architect of another, later, High Victorian tour de force, St Paul’s, Hooton, near Ellesmere Port – and of the extraordinary Leighton Hall on the left bank of the Severn, opposite Powis Castle.

St Luke’s, Blakenhall, bears obvious kinship with William Burges’s Studley Royal. Designer: George ‘Metz’ Robinson, whose other masterpiece, Burslem Town Hall, is not Gothic. It is not even ‘Modern Gothic’. It is ur-Victorian and belongs to no known school. If it recalls a past, it is the past of some Hellenic/Oriental fantasy.

Robinson was art critic for the Manchester Guardian. A precursor of William Boot, he was sent to cover the Franco-Prussian War and was banged up in Metz during the siege – hence his nickname. He lived and died in Earl’s Terrace on Kensington High Street, which was known in the ’60s and ’70s as Queen’s Terrace. That’s the 1960s and ’70s – I can’t be certain about the 1860s and ’70s.

These artists were outsiders – not part of the web of local practitioners who, decade after decade, have questionably enjoyed the bulk of municipal and commercial patronage. Its 1960s version was sharply satirised by David Turner and Malcolm Bradbury in the BBC series Swizzlewick. The series improbably united Mary Whitehouse and the Guardian in censorious hostility and was cancelled after 20 or so episodes. It had been on the money: the city’s chief architect was jailed a few years later.

In the later-19th century, these men developed an idiom that has no peer in England (Glasgow is in Scotland). Birmingham is unique in its creation of an arts-and-crafts urbanism – a sort of architectural oxymoron. This is hands-on arts and crafts, mostly stripped of ye olde whimsy, equally declining to rummage in the late-Victorian dressing-up box.

It can hardly be labelled a movement, but there is an undeniable accord between buildings of different types and uses. Evidently this is due to the employment of the same materials over a long period.

There is, in this tirelessly comprehensive book, a welcome double spread of photos of bricks: blue bricks, firebricks, dolerite and cast dolerite. They tend to age gracelessly. Birmingham is not a mellow sort of city.

In his introductory essay on geology and building materials, Keith Hodgkins mentions that, till about 50 years ago, blocks of slag, the by-product of blast furnaces, were ‘probably’ as commonly used in construction in the Black Country as they were in Sweden and Bristol (at the Devil’s Cathedral, Arnos Vale).

All evidence of this seems to have disappeared – which is to be regretted, for their unforgiving menace is welcome anywhere.

Brummies, collectively unboastful, have a strange habit of claiming that one of the desirable features of their city is that it’s so easy to get out of – to the Lickey Hills and the Clents, and it’s not much further to the Malverns and the Teme Valley.

They are approximately right. Worcestershire, west of the Severn, is the loveliest part of England. And to reach it, you have to take a sort of trip into the past.

Not the past of Bournville, where whimsy was not excised from the twee saccharine cottages. Rather, the past of motoring as a pleasure, of arterial roads and arterial-road roadhouses. These stylistically varied super-pubs – Brewer’s Tudor, Good Queen Bess, Moderne – were not peculiar to Birmingham and its surrounds, but there is no equivalent concentration elsewhere.

They were a reaction to dark, smoky boozers and were supposed to appeal to the entire nuclear family: there were playrooms for kiddies and soft furnishings. Acts going back to the 1870s prohibited driving a coach and horses when under the influence. Further laws followed.

They did not inhibit the great breweries from going on a building bender, whose fruits are today recognisable by plastic banners proclaiming, ‘All Thou Can Eat Breakfast’, ‘Midweek Carvery Mateys’ and ‘Every Day Is Mother’s Day Dad’.

IN PRAISE OF FACELIFTS, BY NICKY HASLAM