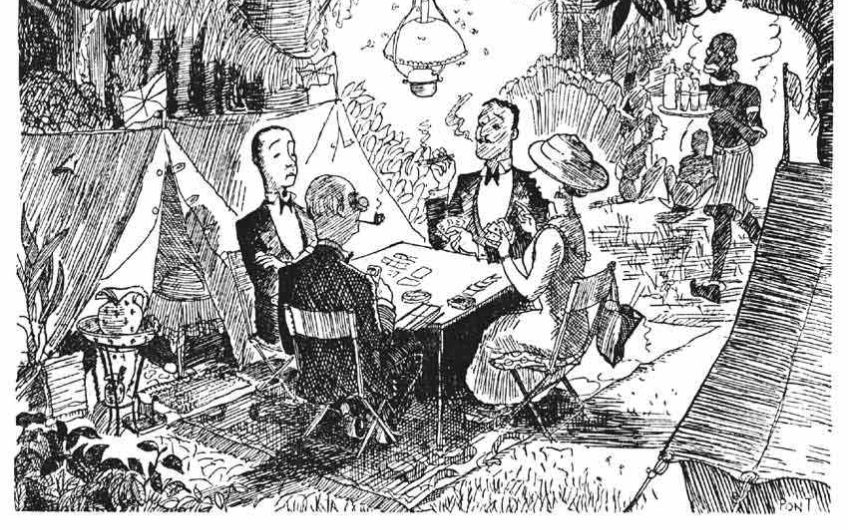 Over eighty years after he died, aged only 32, Pont still nails the British character. By Mark Bryant

On 23rd November 1940, the great British cartoonist Pont died of polio, aged only 32.

Throughout the Thirties, Graham Laidler (Pont’s real name) was celebrated for his cartoons in Punch and his three collections, particularly his famous series The British Character. It is a mark of his genius that, over 80 years after his death, they are still very funny.

The first of the series was ‘Adaptability to Foreign Conditions’ (4th April 1934), reproduced below. In all, Pont produced more than 100 variations on this single theme.

The title of a posthumous collection of his work, Most of Us Are Absurd (1946), gives the key to his crazy humour: he made observations on what he saw as the innate madness of human beings themselves.

According to novelist T H White – in his introduction to Pont’s second book, The British at Home (1939) – Pont said, ‘I do not try to draw funny people. I try very hard to draw people exactly as they are.’

The British Character ran for six years, from April 1934 until April 1940, and contained 104 drawings. A collection of more than 50 of these (plus others), with an introduction by E M Delafield (best known for her 1930 bestseller The Diary of a Provincial Lady), was published in 1938 and sold 10,000 copies before Christmas that year.

A notable example is ‘Love of Keeping Calm’ (5th May 1937), published two years before the Ministry of Information’s Keep Calm and Carry On poster campaign – so popular in a wide range of recent parodies. In Pont’s cartoon the diners on a sinking ship (the men again in dinner-jackets) continue their meal, surrounded by water.

Gavin Graham Laidler was born on 4th July 1908 in Jesmond, Newcastle upon Tyne, son of the proprietor of a firm of painters and decorators. He was educated at Newcastle upon Tyne Preparatory School and Trinity College, Glenalmond, Perth (now Glenalmond College). One of Pont’s closest schoolfriends was John Fenwick, a grandson of the founder of Fenwick department store (established in Newcastle in 1882), to whom Pont dedicated his third book of cartoons, The British Carry On (1940).

He then studied for five years (from 1926) at the Architectural Association’s School of Architecture in London. However, soon after qualifying (ARIBA), he contracted tuberculosis and, after a major operation in 1932, was unable to pursue an architectural career.

Turning instead to drawing, from 1930 to 1936 he published a weekly four-frame strip The Twiffs, in Woman’s Pictorial magazine using, for the first time, the pseudonym Pont (said to derive from a childhood joke about Pontifex Maximus – the Pope’s alternative title as ‘greatest priest’).

His first cartoon appeared in Punch on 31st August 1932 when he was 24, and from then until his death, eight years later, he produced more than 450 cartoons for the magazine.

As well as The British Character, Pont’s other series included The British at Home, Wartime Weaknesses and Popular Misconceptions. One in the latter series was ‘Life in the BEF’ (13th December 1939), showing members of the British Expeditionary Force literally hanging out their washing on the Siegfried Line (as in the popular wartime song), to the astonishment of its German defenders.

By coincidence, the German cartoonist E O Plauen produced an almost identical drawing for the weekly Das Reich, with a British POW hanging out his washing between two gun turrets on which storks are nesting.

Pont’s work in the first year of the Second World War was especially good. This included cartoons showing the supposed coolness of the British in adversity: like the two pub regulars and a barman quietly ignoring Lord Haw-Haw’s radio propaganda claims of national panic (14th August 1940).

Some, though still very funny, were deemed unsuitable to be published by Punch during the war and made it only into the later anthologies. They include the country squire in his mansion, saying ‘Austria, Czechoslovakia, Poland. And now, dammit, Hunting.’

Every fan has his or her own favourite cartoon. The Oldie’s founder and former editor, Richard Ingrams, said, in his introduction to The World of Pont (1983), that his was the man in the British Character cartoon ‘A Disinclination Ever to Go Anywhere’ (2nd February 1938), reprinted above.

Ingrams wrote, ‘He sits slumped in a comfortable armchair while his wife, who has got someone on the other end of the phone asking them to dinner or drinks, gazes at him with a look of real desperation in her eyes. That man is me...’

Pont had many admirers, from J B Priestley to Osbert Lancaster (who was born exactly a month after him). Lancaster once said, ‘In comic art, as in many other fields of human endeavour, the man who can worthily maintain a long-established tradition and make it relevant to the times in which he lives is rare indeed. Such a one was Pont. A great many Punch artists have observed and recorded the life of the middle classes; but few could rival his eye for the revealing detail and fewer still the delicacy and wit which every lightest bit of crosshatching so subtly revealed.’

Over eighty years after the artist’s death, this is as true as ever.

Vera Lynn stars in a new exhibition. By York Membery

What are middle-aged millennials? - Jessica Repetti

Time to pay up for Major - Edward Whitley

The return of the topper…but what about the tail?