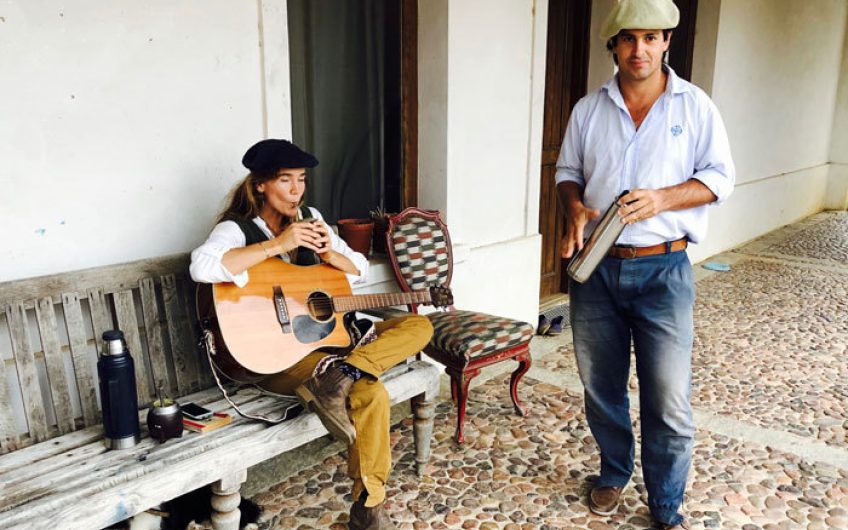 Green leaves, dried in the South American sun, and crushed. A simple cup – a carved-out gourd – cured through years of use. Hot water.

It’s fresh, ancient, bitter, warm, and slow in the drinking.

It’s not like tea. When a Brit meets a friend for a cuppa, for a brew; when someone’s about to dive into a story and - “Hang on, shall I put the kettle on?”; when we absent-mindedly bob our teabags around in the hot water, teaspoons ritually clinking against porcelain, it’s a shared moment, but we Brits like our space. We’ll share the ritual, we’ll share the teapot, but we won’t share a mug.

Uruguay is about sharing. You can’t buy small beers; you can only buy litre bottles, designed to be passed around a bonfire at an asado (barebecue). At the asado, nobody will have a plate. Either a wooden chopping board of meat circulates the bonfire, or – if you’re really ‘country’ – everyone just pulls a knife out of their belt and dives straight into the lamb. So, it only makes sense that the gourd of leaves, the singular mate, is shared too, and it’s shared in earnest.

The gourd passes from hand to hand, from generation to generation. When the Spanish came in the 16th C, settlers were known to sell their horses and their armour to get their hands on it. Today, as I walk down the street, one person in every group of friends has a thermos under their arm. Brushed metal glints in the sunlight as each thermos is raised to pour the next cup, and dozens of gourds pass me by, each one holding a metal straw. Even while we’re at work in the stable yard, the other groom – aptly named Mateo – is never without his thermos in one hand and his gourd in the other, ready to share a mate with anyone who happens to share his company.

The gourd belongs to the server, and they likely only own one. They're unique and personal, a reflection of their owners, and, like a cast iron pan, they last a lifetime and only get better with age. Some gourds are squat and round; others fan out at the cup’s rim and come to a point at the bottom. Some are dark green, or a musky brownish-orange; the skin of the squash polished by handling. Carlos, who runs the stable yard, has his gourd wrapped in leather.

I have yet to meet a single South American who doesn't have one, or who doesn't like the one they have. How strange then that wherever I go, there are always gourds for sale. I travelled all through Patagonia searching for one that I liked, but never found one that hit me in the heartstrings until I was eating a pancho on the side of the road near a garage in Punta del Este, and saw a little stall about to close. There it was. An unassuming little gourd with a rounded belly, a flared rim, and a flat bottom. Its leather cover isn’t polished, engraved or embossed, just neatly sewn and pressed so it sits comfortably in the hand. Mateo nodded his curt approval.

Curing one’s mate is as divisive as cooking a turkey. Carlos told me to cure my gourd with whisky. I heard something about burning, and vodka, and charcoal, but that all seemed a bit much. Then Mateo offered me the old leaves of a mate we had shared and I liked the idea of my gourd descending from his. A week later, it was ready. Sitting in the stable yard, I poured the water for the afternoon mate, my gourd passed naturally between familiar hands, and I tried not to smile.

Work was light that afternoon, so I read aloud from La Biblia Gaucha, ‘The Cowboy Bible’, while Carlos and Mateo silently mouthed the words I was about to say. The story was called Hopsitality; it’s the middle of the night, and an unknown traveller has just appeared on the ranch…

'He’s a man of about forty years old. His face, bright with the vigour of creole blood, is extremely pale. A wide bandage covers his forehead and his right eye. The bandage is stained with blood, the mark of a recent knife-wound.

They eat supper; then the mate is passed around. They talk.

In the morning, the traveller went to get his horse, tacked up, and brought it back to the shelter. When the mate had been shared and the breakfast eaten, he took his host’s hand and said firmly, “Thank you, and forgive my inconvenience.”

He mounted his horse, and left.

Nobody had asked him his name, his origin, what he was doing or where he was going.

Carlos nods and passes me back the gourd. I pour the water and pass the gourd to Mateo. When sharing mate, one only says ‘thank you’ when you’re leaving the circle, or when you wouldn’t like any more. Accepting the mate from the server is thanks enough.

“What does it mean to you?” I asked Mateo.

He stopped running his thumb over the blade of his knife and looked up at me.

“Mate? It doesn’t mean anything. For you it means something because you’re from somewhere different. For us it’s how we live.”

The homeless of empty London