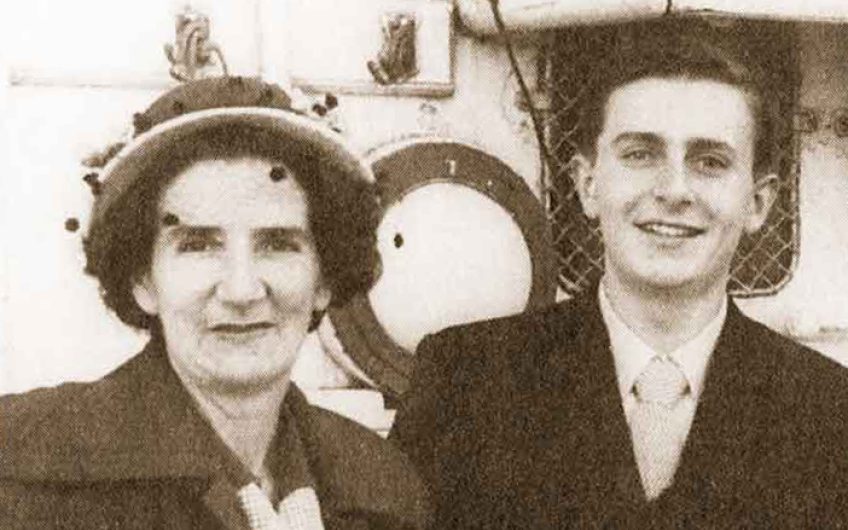 A voyage round my mother: Louisa and Barry, sailing to Sydney, 1950
View Full Size
1
of 1

She scoffed at his shows, called the maid common and hated vulgar flowers. But Barry Humphries still loved his mother

‘You see, Barry – not everybody likes you.’

My mother offered this kindly reminder one morning at breakfast 69 years ago. The morning edition of the Melbourne Argus was propped up against a Weetabix packet, and I was gloomily reading and re-reading a less than enthusiastic review of one of my early shows. The theatre critic, Frank Doherty, was a respected senior journalist and, moreover, I had failed to amuse him.

It took a surprising number of years for me to apprehend that Louisa Agnes Humphries felt that it was part of her maternal duty to cast a sceptical eye on my theatrical attempts, to make sure I never got too big for my boots, and to make sure I realised that, one day, I would have to grow up and get a real job; a task I still pursue. Perhaps writing a column for The Old Fella is finally it!

I believed then that my mother’s censure was not unkindly meant. Later, she would take my part in the odd adolescent skirmish with my father.

‘We don’t know where Barry came from’ was another of her frequently uttered observations, delivered out of the blue at dinner parties when strangers were present. All eyes were then turned to me, the eldest son, whose very provenance was somehow open to speculation. I was slowly learning how exceptionally gifted children can suffer at the hands of alien, but well-intentioned, parents.

But where did they, my parents, come from? I wondered. My father was a successful builder of suburban houses for the well-to-do. My mother, one of a family of five sisters, had been, in her spinster years, a modiste at the Misses Salon on the seventh floor of the Myer Emporium, Melbourne’s best department store.

I wonder if my perusers know what a modiste is? She is really a glorified shop assistant with dressmaking skills, carefully trained to accost ladies with the words ‘Can I help Modom?’ or ‘Is Modom being attended to?’

A far cry from today, when the surly, non-binary retail executive, wearing T-shirt, jeans and different-coloured fingernails, indistinguishable from her slatternly customers, is usually noticeable by her absence.

I have elsewhere told how I grew to notice my mother’s froideur and once plucked up the courage to ask her if she loved me. ‘Of course!’ she protested. ‘I love your father, naturally, and my own mother and father and then, I suppose, well … you!’

I realised, then, that love was bestowed in a strictly hierarchical fashion – but at least I was not too far back in the queue!

Clandestinely she paid for my driving lessons, until the terrible day when the instructor came to the front door and was greeted by my father, who was unexpectedly at home. He was furious that I was being taught to drive, as he believed I was incapable of manipulating a motor car – and he was right. As it happens, I drive too slowly, or too fast, and I am the constant recipient of road rage. Now that my licence has expired, my driving has greatly improved.

The incident between my father and the driving instructor took place at the front door of our neo-Georgian residence, and this was also the setting in which my mother dismissed the Honey Man.

For many years, a kindly First World War veteran had delivered jars of delicious honey to our house, but one morning at breakfast I noticed the honey tasted different. It was probably a superior and rare honey from some exotic flower-bed that the bees had discovered on their own. When the Honey Man stopped calling, I assumed that my mother had complained about his ‘funny-tasting’ product, but Shores the housekeeper said, ‘Oh no – it is because he came to the front door.’

Our house had a very clearly marked tradesmen’s entrance, bearing the mysterious injunction ‘NO HAWKERS OR CANVASSERS’, as if the purveyors of birds of prey or textiles might be discouraged from proffering their wares.

Shores was Mrs Shores. Although not a full-time housekeeper, as she lived elsewhere, she was always there, leaning on the dormant Hoover in her faded floral bib apron and talking. My mother might be many rooms away – upstairs, perhaps – but Shores talked on. Her husband was in the furniture-removal business and, in the old phrase, ‘took drink’.

But Shores – and later Mrs Ferguson – were there to entertain my mother. A personal cabaret double act for my mother’s exclusive amusement.

Ironing, dusting, washing-up – these were all duties beneath them. They were tasks for Valmai, a waif from the Salvation Army home. She did all the work around the house, lived in a maid’s small room and was treated by the whole family, except my kindly father, with total condescension. She had one night off a week, which she spent in town with her elder sister, Wilma, whom my mother described as ‘ordinary’.

I often wondered what the sisters got up to together until one night, some years later, in the fast-photo booth under the Big Dipper at Luna Park, I saw a sun-bleached display of young lovelies and revellers of yesteryear. There were Valmai and Wilma with cigarettes and sailors! So Wilma was ‘ordinary’ after all. At least she had a life.

I had a nanny called Edna whom I loved. She must have cared for me for some time before the day she disappeared. Later my mother described her as ‘a bit too clingy’ – my mother’s word for affectionate.

Apart from Shores and Fergie, another woman arrived (by the tradesmen’s entrance), who was to look after us four children while my mother was in hospital and away for a long convalescence from a mysterious illness. Nervous breakdown? Miscarriage? We never knew.

Mrs Lane came from the country and she was, moreover, in my mother’s view, ‘countrified’.

After my mother came home, she spent most of the day in bed. She had long given up tennis, card evenings, cake-baking or donning hat and gloves for a shopping trip into town. I once saw Mrs Lane trudging up the stairs with my mother’s breakfast tray. I was unobserved, but I heard her mutter at every step of the ascent, ‘I hate her, I hate her, I hate her.’

I would love to have been present when my mother sacked Mrs Lane, but I think she probably left this task to my father. She later said Mrs Lane was far too ‘C-o- m-m-o-n’ and had a funny, talcy smell.

My father may not have been religious but he was a regular churchgoer and was constantly importuned by the vicar of St Mark’s, Canon P W Robinson, to repair the roof of the jerry-built church. My father’s workmen were recruited for this and other sacerdotal chores.

My father was the son of a Manchester builder who came to Australia after the Gold Rush in the 1880s, when Melbourne was, along with Buenos Aires, the richest city in the world. He survived the depression and was a millionaire by the age of 45, supporting at least six members of his family, his parents and my mother’s improvident brother.

My mother was vehemently anti-clerical and always had an excuse for not going to church. At the age of 15, uncertain of my pedigree, I decided that I preferred, given the choice, to be Jewish.

I like to think that my mother’s distrust of the Church of England sprang from some atavistic adherence to a more ancient faith. She had several of the same characteristics as the mothers of some of my Jewish friends. My father insisted on saying grace before every meal, sometimes, as I imagine, to the discomfort of schoolfriends who might be present. During this and other family prayers, I could not help but notice that my mother’s eyes were wide open.

I had long exhibited a precocious talent for painting and drawing. So when, at the age of 16, I said I wanted to study at the George Bell Art School in a nearby suburb, she secretly paid for the weekend classes – happily unaware that they were life classes.

In the suburban studio where I crouched at my easel, a mere schoolboy, surrounded by the beards, corduroys and sandals of my fellow students, we all scrutinised the naked model, a young hoyden, who must surely have been one of Valmai and Wilma’s least inhibited friends. In the freezing winter, she posed beside the studio stove so that one half of her was pink and the other blue, like a drawing by Dufy.

In the winter of 1958, my parents and my Auntie Elsie embarked on a world cruise. The highlight of this for my mother was Japan, the last place I expected her to enjoy. Its standards of cleanliness must have met with her approbation. They went only to grand hotels and my mother must have enjoyed the women’s exotic attire.

It was clothes she loved as much as she loved camellias. Our garden, from which she had banished worrying blooms such as the dissolute rose or the priapic gladiolus, was full of these coldly flowering bushes.

She showed an oriental taste when she decorated our family home with cane furniture, brass Buddhas, gongs and knick-knacks. These were discarded in the late 1930s for modernistic furniture and textiles, bearing the brown and orange chevrons and trapezoids of an enervated Cubism. By the 1950s, we had ‘feature’ walls painted in contrasting colours and Van Gogh prints.

All her clothes were made for her by Miss Wilmot or Mitzi of Vienna, an Austrian-Jewish refugee from Hitler whose beautiful dresses were almost entirely subsidised by my mother.

Now, in the Christmas Eve of my life, I look back at my parents with love and compassion. Like Bing Crosby, my father died playing golf, on the 14th tee of his club, at the untimely age of 68. I like to think that his last moments were happy. My mother lived on in the big house for another 12 years.

It is a wonder to me how much we resemble our parents. They stand like ventriloquial ghosts, putting the old words in our mouths and the phrases we swore we would never use. In New York, 16 years ago, my son Oscar was living with us, and one evening he was out with some friends after a very clear injunction to be back by 12.30 at the latest. Of course, when I heard him creep through the front door at 3am, I snapped on the lights. ‘This isn’t a hotel, Oscar,’ I barked.

‘But it is, Dad,’ came the incontrovertible reply.

I had heard my voice – and my father’s voice.

In my mother’s last years, I know she struggled with remorse and grief. She grieved, as will I, as will we all over our sins of omission. About a word not spoken, a caress not proffered, a smile not bestowed, and love withheld.

The Pankhursts at war