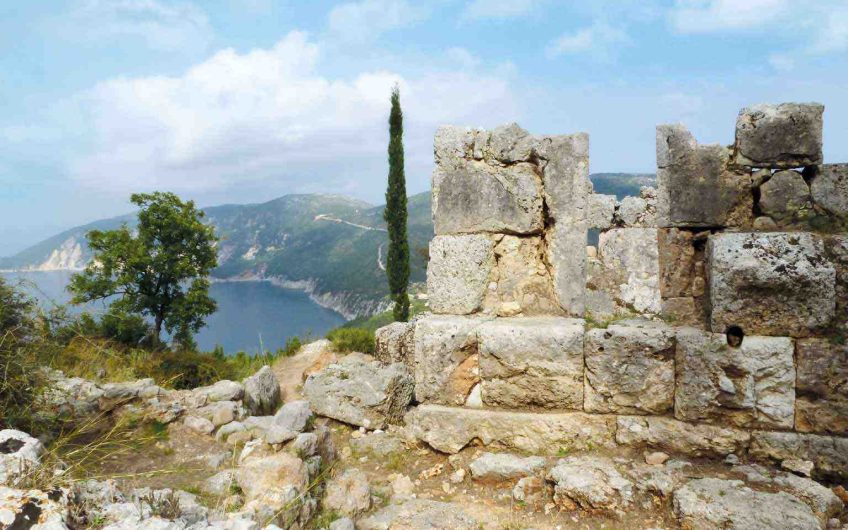 Journey’s end: Odysseus’s Palace on Ithaca dates back to 3000BC
View Full Size
1
of 1

As he turned 70, Nigel Summerley followed in Odysseus’s footsteps from Italy to Ithaca

If three score years and ten is a milestone on life’s journey, where better to spend one’s 70th birthday than in Ithaca – especially after my own 4,000-mile odyssey, much of it in the wake of the Big O himself?

Odysseus was plagued by Poseidon; I travelled in the face of a pandemic – not easy when criss-crossing between Greece and Italy in late 2020. After sailing around the Aegean, I traversed the Peloponnese, took boats and trains across Italy to Sicily, went north up Italy’s ‘Odyssean coast’, then doubled back to Greece to make landfall in Ithaca.

My odyssey really began in the Cyclades with a beautiful Greek woman called Helen (or Eleni) – no, not that one, but a friend on the island of Syros. It may surprise you (it did me) that so many sites linked to Odysseus are in Italy. But Eleni knew the connection and played me music from a 2002 EU project, Ulysses’s Ports, involving musicians from Greece and Italy celebrating their common Odyssean heritage.

Sailing back to the mainland, I took a boat from Patras via Corfu (home of the Phaeacians who helped Odysseus home) to Italy.

At Brindisi a zealous border cop told me I could not enter the country as a tourist; it was so long since he’d seen a holidaymaker that I think he genuinely believed they were banned. Only when I invoked the name of Odysseus, waved my negative COVID-19 test result and explained my mission did he relent.

I sped south as fast as unreliable Italian trains allowed to Sicily, land of the Cyclops. Here too was the Strait of Messina, between Sicily and Italy’s toe, where Odysseus faced the twin perils of Scylla and Charybdis.

There was no sign of Charybdis’s foul whirlpool; the water was warm and still as I swam out from Messina, the sun burning hot. But 90 minutes later, after a ferry across the Strait, I arrived in the town known as Scilla to the sound of mountain thunder and rain flooding the streets.

The tempest seemed so supernatural that I fancied the gods wanted to stop me from scaling the 250ft crag called Scylla’s Rock. But the weather cleared and I reached the summit. From here, Edward Lear marvelled at seeing the Aeolian Islands. Storm clouds hid them from me, but I certainly felt the winds of Aeolus that caused Odysseus so much trouble.

I had planned to sail past those islands and the Galli isles, lair of the Sirens, but my boat was cancelled at the last minute. So no need to think of being tied to a mast. Trains took me to Naples and beyond to explore the Odyssean coast and one of its most stunning spots: Lucrino, by Lake Avernus and the entrance to the Underworld. The ancients reckoned a lakeside cave led to the land of the dead.

The only cave here, called the Sybil’s Cave, is truly spooky, the entrance barred, cobwebbed and guarded by flies and lizards; an atmosphere of decay seeps from it.

The vast, 200ft-deep lake sits in the crater of an extinct volcano. And here I had my strangest experience. Halfway round the lake, I came to a wooden bench and found myself saying aloud, ‘Hello, Jean [to my mother who died in 2019].’

I don’t believe in an afterlife but, sitting on the bench, I felt her beside me, sharing the amazing view. My mother, a great traveller, had spent later, less happy times confined to a bench outside her home; perhaps my awareness of this had triggered something.

And then I remembered that Odysseus also met his dead mother here, although he didn’t know she had died.

Next came Formia, home of Cicero, who reckoned this was the land of the Laestrygones, man-eating giants who attacked Odysseus’s crew. The Formian sky can be bright blue above the sea, while black clouds clothe the mountains and stretch threatening dark fingers towards the visitor. An air of malice is palpable. Like many of Odysseus’s men, Cicero met a gruesome end here, decapitated by thugs sent by Mark Antony. I paid my respects at his monumental tomb just outside town.

I missed the Galli isles but not sirens. Statues and images of seductive merwomen abound on the Odyssean coast; and there are living sirens too: swimming in barely-there bikinis or lounging topless on posh yachts. The salacious Roman emperor Tiberius would have approved.

Tiberius was also an Odyssey fan – at his seaside villa at Sperlonga, he had a gigantic cavern in the grounds filled with epic tableaux of Homeric scenes.

Their remains were found during roadworks in 1957 and some have been reconstructed at the museum next to the ruined villa, most notably the blinding of the Cyclops Polyphemus.

Two places lay claim to be the island of Circe, the sorceress who turned Odysseus’s men into swine. The first, Ponza, off the Odyssean coast, is certainly magical – although I found sailing round its rugged neighbour, Palmarola, in a small boat much more like something from the Odyssey.

The second – and my choice – is nearby Monte Circeo, now a dramatic headland but long ago an island. This 1,700ft peak constantly shapeshifts depending on light and weather but always looks like an island. Although from a distance it appears severe and barren, I found as I climbed it that its slopes are covered with a fecund, enchanting forest; all day I saw no one else here, men or swine.

And so north to Rome, east to Bari and over the sea to green Ithaca – which lacks touristy beaches but majors in wild beauty. It also has an archaeological site dating back to 3000BC, now talked of as ‘Odysseus’s Palace’ (pictured, left).

Archaeologist Andronikos Sakkatos, supervising a tidy-up when I visited, said, ‘If you want to find Odysseus, this is the place. You get a feeling here that you will get nowhere else in the world.

‘Whether or not there was a real person called Odysseus, there were people like that here. And later Odysseus became the local hero, his face appeared on coins, people made offerings to him before embarking on a journey.’

When I landed on Ithaca, I walked the steep road from the port. An English woman in a four-by-four offered me a lift but I said no. As the road grew steeper, I regretted it. But then another car stopped. A Greek woman in a leopard-print coat, with wild blonde hair and full make-up, told me to put my suitcase in the back – and off we went.

I asked her to drop me near Deksia Beach, the place where Odysseus is said to have finally come ashore (and not far from my rented apartment). As I tumbled out of the car and thanked her, I asked her name, almost as an afterthought.

After 40 days, 13 boats, 16 trains and 15 buses, the Fates had timed it so my arrival at Odysseus’s beach was in the car of a woman with the name that drew him back to Ithaca. To hear that name from her lips almost made me cry with emotion. I don’t think my odyssey could have a better ending.