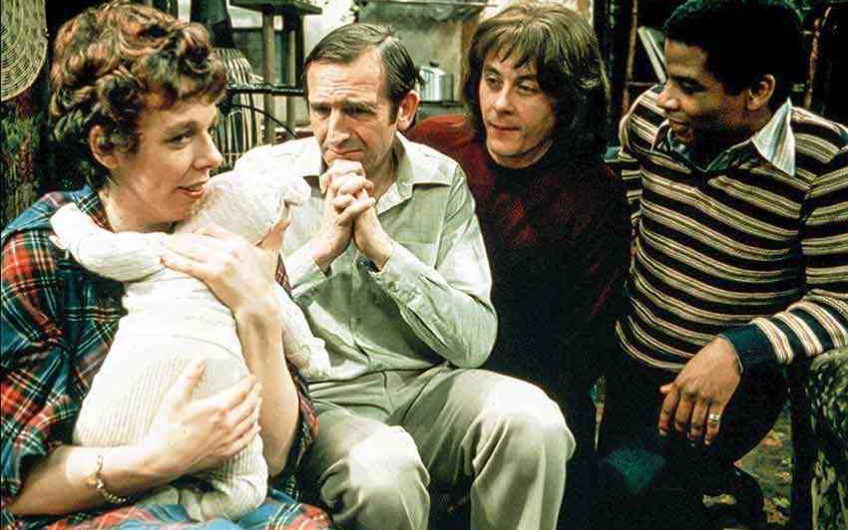 In 1974, Rising Damp was my first taste of writing a series for TV. I was hardly prepared for the hurly-burly of situation comedy, where shows had to be written in a fortnight, rehearsed in a week, recorded in an hour and a half, and put out in 25 minutes.

A few months before, I’d been an auditor with the Electricity Board. Most people thought I was mad when I left to become a playwright, but were too polite to say. I had taken this decision on the strength of my first play – The Banana Box – which in 1973 had an all-too-brief run in the West End. The Banana Box was the play that inspired Rising Damp. Although there was a great deal wrong with it, I was encouraged by its modest success.

The idea initially came from a newspaper article. It was the story of a black guy who had stayed as a hotel guest for a year by posing as an African prince. He’d been received with a great deal of fuss and respect; it was a great story and I thought it could be developed into a comedy.

I’d originally envisaged a play along the lines of the Victorian farce Charley’s Aunt (1892) by Brandon Thomas. But, as I put pen to paper, the story took on a completely different complexion from the newspaper article. Instead of the story’s setting being a posh hotel, it became a seedy lodging house, which was more my style.

The central character, Rigsby, was an amalgam of my own thoughts and someone I knew. The real-life character wasn’t as invidious or wretched as Rigsby but, when I started working, just after the war, some people still had contempt for all things foreign. I experienced some eye-opening stories and observations and took all this old-sweat cynicism and gave it to Rigsby.

The scripts were written in feverish haste by someone who didn’t really know what he was doing, and was finding things out as he went along. I didn’t admit this at the time, even to myself. I took the view that sitcom-writers fell into two categories: the quick and the dead – and I didn’t intend to be one of the latter!

Inspiration came slowly. I’d stare at the blank page for hours without thinking of a single sentence. I once read that Michael Frayn stared so hard at his typewriter in search of inspiration that he discovered how the tabulator key worked. I know how he felt. I never actually thought I’d finish a series. I did, however, have one stroke of luck during all of this: Leonard Rossiter (1926-84).

Len had been in The Banana Box and loved his character. He was fiercely loyal to the series. Although he consumed my words at an alarming rate, he had an armoury of looks, leers, shrugs and incredulous expressions that earned me laughs I never had to write. Len was the driving force behind Rising Damp. I may have written the words, but he provided the punctuation. His whole body would form a question mark. The twist of his head was an exclamation, his eyes blazed italics and the open-mouthed stare was a line of dots going into infinity.

Frances de la Tour also appeared in The Banana Box. At that time, I wasn’t even sure I could write a female character. The character I created was a little sketchy and there were gaps. Frances filled these gaps with a wonderful display of gauche innocence, coupled with an underlying sexual repression. When people complimented me on this fully rounded character, I was never sure how much was me and how much was Frances.

I do know that the more scenes I wrote between Frances and Len, the easier they became – and they were always immaculately performed. The two may have been politically opposed; they may never have kissed – but together they were magic.

We were lucky to get Richard Beckinsale. He’d already had considerable success in The Lovers and Porridge. Although not the oldest, he was the most experienced sitcom actor in the cast. Richard’s laid-back manner and his minimalist style of acting would have made him a great film actor had he lived longer – he died in 1979, aged only 31.

Those talents were not only complementary to Len’s frenetic performance; they were essential. He was able to absorb all Len’s energy and then disperse it with great naturalism. It would have been fatal if they’d both conducted their scenes at the same high pitch.

Richard was one of those actors who appeared to be doing very little while a good deal was going on under the surface.

The role of Alan was not Richard’s favourite – he told me once that he was tired of playing innocent young men. He was a victim of his youthful good looks. I always said, ‘Never mind, Richard. Enjoy it while you can – there’s plenty of time.’ Unfortunately there wasn’t.

Don Warrington came to the play, and then the series, straight from drama school. Imagine how intimidating it must have been to be plunged into a show with three enormously talented and experienced actors. Confronted with this, Don showed grit and determination, and a great deal of savvy. He didn’t try to compete for laughs; he performed with sardonic coolness. I always felt Don and I were in the same position – we were both beginners. We had to learn quickly or we were lost.

Len – and a brilliant cast – guaranteed the success of the series. Audience ratings grew gradually and just kept growing until we had achieved six number-one slots, beating the mighty Coronation Street. The show was also the first ITV sitcom to win the Best Situation Comedy BAFTA. Our success was assured, as long as I didn’t blow up. And when I did throw down my pen in exhausted desperation, it was Len who stood by me. He said he wouldn’t work with any other writer – and the studio had to wait.

I have been asked why we made only four series (lasting until 1978 – with a 1980 film, too) when the show was hugely popular. The reason is simple. Len and I didn’t come from theatrical backgrounds. He worked for years at an insurance company. I worked for years at the Electricity Board. We’d both had enough of long-running shows. We knew it was time to move on – what we didn’t know was that Rising Damp would become a little part of TV history.

As I look back at the show now, it appears to have been written by someone else, from another world. They couldn’t be written now and certainly not by me. Why are they still being shown?

Perhaps because we always tried to tell a story, and people never tire of stories and, as Len used to say, ‘It’s funny, Eric – leave it in.’

This is our 9th Brexit, says Simon Jenkins