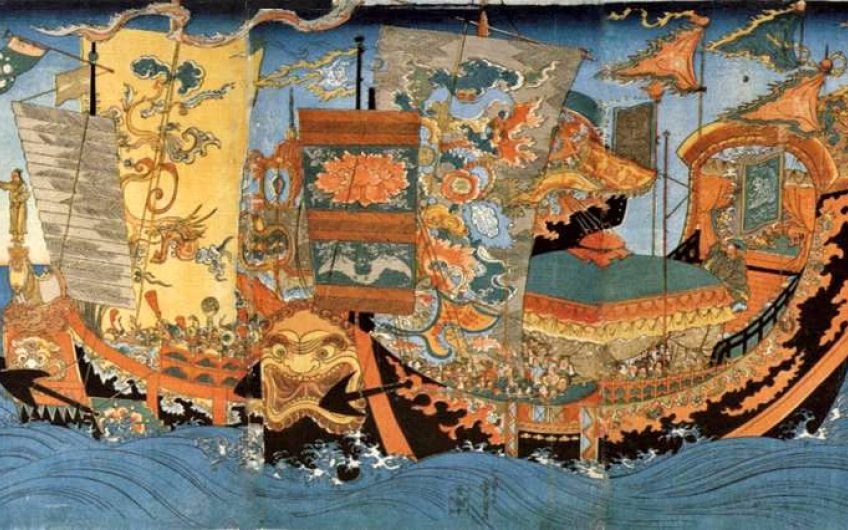 If it wasn’t for Thomas Cook, I might know nothing of the bowmen of Imperial China and the paper umbrellas they carried, along with birds in bamboo cages.

It could have been too difficult, you see, for my grandmother to travel alone without a good travel agency. For in 1910 she’d fallen in love with my grandfather when he was in London on furlough from China. Without Thomas Cook, my great-grandfather might not have allowed her to follow him there. Then I’d never have heard about the bowmen and their red and silk banners.

Grandpa and she might have settled in London, happy enough to be together, albeit amongst omnibuses and smog.

However, six weeks after their first encounter, she left for China with barely a backward glance. With twenty sovereigns in her pocket, as well as money in many currencies, she set off from Victoria Station for Vladivostok. It was to be a twenty-eight day trip. ‘Thomas Cook arranged everything, dear, it was quite easy and father wasn’t troubled.’

Despite her political ideals as a suffragist, and her experience as a gym teacher, she was a young twenty, a twin, whose mother had died giving birth. Thomas Cook’s arrangements must have comforted her father.

She comments, in her diary, that pre-war Belgium and Berlin were ‘neat and pretty.’ The train travelled across No Man’s land to Alexandrova and into Russia, where it was pursued by bearded bandits, and so there were guards on the train at night. She describes peasants bringing food to the stations, dressed in red and gold, while ‘mobs of travellers from the fifth class hurled themselves from the trains to queue for hot water from station samovars.’

The train was crowded with crying children, she said, and it stank, although she was travelling in a different part of the train. On board were Menonites, Tartars, Orthodox priests too, all staring out at the flat farmlands.

As they travelled deeper into Russia, more guards climbed aboard, in fur hats and boots. As the weather grew colder in the Urals, the bandit threat intensified and, through a Siberian blizzard, she saw ‘sad criminals’ herded into trucks.

At Chiliabinsk, there were larch forests, fairy tale countryside, (‘Hans Anderson’) and pretty wooden stations. But my grandmother told me that, as they travelled further east, the peasants came to see the bi-weekly express and had silent, white faces, staring dumbly, in long fur coats and hats.

At Vladivostok, she was met by Grandpa. They married in Shanghai Cathedral, then set up home on the Russo-Sino border, protected by Cossacks. My grandmother knew nothing of the ‘facts of life,’ but her first child, my mother, was born with a Japanese doctor sitting cross-legged on the end of her bed, staring fixedly at the process.

This did not put her off. They went on to have three more children and lived in China for another twenty years, an extraordinary time before the revolution.

Because of Thomas Cook, therefore, I know less about Londoners in the early twentieth century than I do about Chinese conjurors, who arrived on the family’s verandah from nowhere to make magic for the children. I’ve heard of Chinese men making little dolls from dough for my mother, dressing them in silk and stamping them with gold. I can picture visiting Chinese pedlars carrying mountains of baskets, light and lovely as kites, and I know of the bowmen in their red and gold, and of bandits being chased by Cossacks with flashing sabres.

There is also a rumour that Mao was the family’s cook. But that is another story – and another cook.

* Here, by the way is the story I was told by my grandfather:

The camels’ breath rises in the bitter morning air as they shift from foot to foot. Their drivers have loaded them with bundles of silk, glancing anxiously at the clouded mountains to the West. They must leave for Russia and soon.

But none of them urge the camels forward. They stand about in groups, smoking long pipes and chattering, calling to friends who have jumped to the roofs and are pointing north.

The camels lower themselves to the ground, belching. Perhaps they sense that they won’t move for hours, because there isn’t an inch of room in the streets.

The bowmen have arrived. Bowmen! Thousands of them!

Everyone’s outside their houses, crammed together in their quilted coats, eyes like saucers. ‘More than thousands,’ shout people from the roof tops.

They’ve been passing through the town for hours, with their smell of bamboo and silk and sweat, a river of red and gold in their square embroidered coats. Will they never finish their tramping?

The drivers scrutinize the different ranks emblazoned on the warriors’ breasts and they nod admiringly, spitting and jostling for better views, some of them scribbling notes in the sand.

Every rank is led by a boy. Each one has his eyes fixed south as well, and carries a fluttering pennant on a bamboo pole and every pennant’s different in design, yet the same, because it is richly embroidered, with silk.

Each man carries a bow, a bird and an umbrella, and he marches stiffly like a marionette.

There’s another boy on a balcony far above the street, a foreigner. His blue eyes are round with excitement, but there’s a little smile on his face because he’s had had a crazy thought. There are clouds on the mountains, rolling towards the town, and so he’s hoping for a sudden cloudburst.

Then the bowmen will erect their umbrellas to shelter their bird cages. That, his father has told him, is what the bowmen do, even in the middle of battle.

The birds are fluting happily, and so the boy can quite see why the bowmen would want to keep them dry. It’s a kindly thought for such brutal warriors. Suddenly, he shivers. There’s a cold breeze, coming from the north. Perhaps there’ll be snow. Then the umbrellas will be thick with it, like white dumplings.

Still the bowmen tramp, but up the hill there are shouts. The camel drivers are pointing. They’ve seen the end of the line of marching soldiers. The last pennant is coming into view. They prod their camels, ready to leave with their bundles of silk before the weather turns sour, raw silk for Russian gold.

The last flank of soldiers passes underneath the balcony. As the boy reaches out a hand to touch their pennant, the camels stand up, grumbling and spitting under the weight of silk.

The fading rhythm of the bowmen’s marching boots is drowned by the drivers as they sing and yell at their reluctant beasts, some high in the saddle, others following. Slowly, the camel train moves west.

The blue-eyed boy leans on the balcony as the camels sway through a cloud of wood smoke. Then he freezes, moving out of view. Bandits are creeping from hiding places in the alleyways and they scuttle like rats after the last camel in the line, their mouths gaping.

‘Watch out,’ screams the boy, like Peter with the wolf.

But nobody hears him. ‘Watch out,’ he bellows. But there’s too much noise, what with the drivers’ shouts and the last tramps of the bowmen and the snarling dogs. ‘Watch out,’ he shouts with all his might.

A bandit sneers at him, his long pigtail swinging like a rope. The boy shrinks back, imagining him leaping to the balcony with his knife. He gasps as the man leaps clean over the pack of dogs and their snapping mouths and hurls himself upwards to grasp the camel driver by the neck, just below the balcony.

The bandit’s knife catches the last of the sun as it vanishes behind a yellow cloud. Suddenly the camel sways, its legs buckling as bandits crowd its back to slash the ropes on the bundles of silk. The bandits vanish into the alley ways, their shoulders hunched under the weight of silk.

The driver falls to the ground, blood streaming down his neck. There is a trail of blue silk thread beside him, like a piece of sky.