My return to the Falklands - Robert Fox 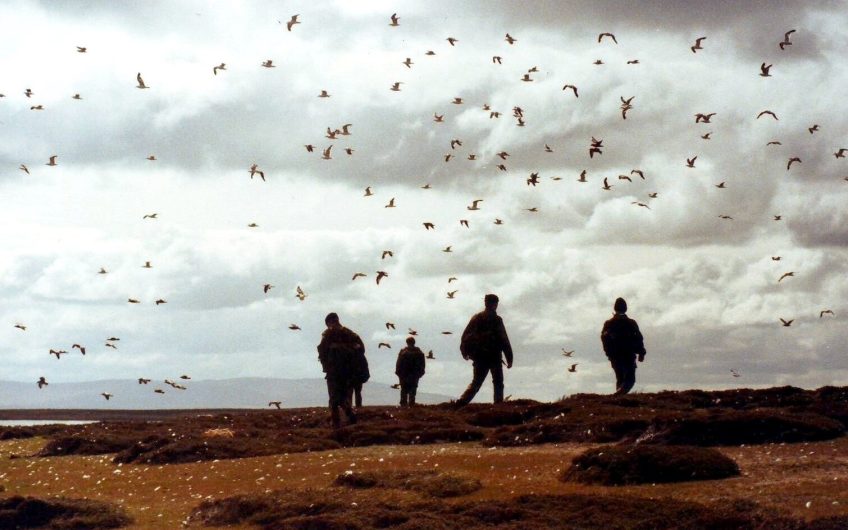 The Falklands War began 40 years ago. Robert Fox recalls being embedded with the British Army

On a fair, blustery southern summer’s day, it takes industrial-strength hawsers to lash down the cabins of the Sea Cabbage Café – the top tea rooms on the Falklands, on Bluff Cove Bay. One more roar of the Roaring Forties and the place would take off – next landfall, the Antarctic continent.

It’s the caff at the end of the Atlantic, a work of genius by Kevin and Hattie Kilmartin. They offer cream teas, with home-baked scones, Diddle Dee jam and Falklands Smoko shortbread as specialities. Hattie spins her own tweed, for caps, capes and scarves. Visitors wade through a mixed colony of Gentoo and King penguins.

The Sea Cabbage is a major attraction in a booming tourist industry. Some 60,000 tourists arrived in the Falklands in the 2016/17 season, most on cruise liners for a day visit.

The Kilmartins host up to 350 visitors a day, arriving in two-hour shifts by battered Land Rovers, rumbling across the peat bog. An added frisson is the drivers’ warning that they may be skirting an Argentine minefield, records of which are characteristically vague.

The brief war to turf out the Argentine invaders from the islands in 1982 is a looming presence. Across the bay, the troop ships Sir Galahad and Sir Tristram were struck by Argentine planes out of a clear blue sky, killing 56 and wounding 150.

Hundreds of veterans of the conflict return to the battle sites each year. I’ve just made made the return with three other veterans to give technical advice for a feature film about the battle at Goose Green, on May 28-29, 1982. It will be the first movie about the Falklands War. The veterans were Chip Chapman, a platoon commander in B Company, who has just retired as a major-general. Nigel ‘Spud’ Ely and Stuart Cardy were leading paratroopers with C and D company.

My three companions were soldiers in 2nd Battalion the Parachute Regiment, who fought a strange, 36-hour battle between 27th and 29th May. In the topsy-turvy engagement, the paras were nearly stopped in their tracks by a stronger Argentine force than expected. At that point, their commander, the charismatic, impetuous Lt Colonel H Jones, a half-American Old Etonian, led a small group across a sunken gully, hoping to unlock the battle – only to be cut down by a lucky shot from an Argentine trench he hadn’t spotted.

With little but their own determination, drive and tactical cunning, the paras prevailed until firing ceased at dusk. Extraordinarily, the following day, a force of just under 1,000 Argentine forces, nearly twice the numbers of the British attackers, laid down their arms in the paddocks by the Goose Green stockyards. They had felt abandoned by their own high command. Shortly after, 120 islanders emerged from the community hall, where they had been held hostage for the past three weeks. This is a crucial part of the story, as the paras had little idea that they were there at all during the.

With David Norris of the Daily Mail, we were the only two reporters in the battle itself from beginning to end. I was the correspondent for BBC Radio News at the time. We heard H Jones give his final orders to the company commanders the night before, the crossing of the start line and the advance through the night and dozens of mortar and artillery rounds, lighting the bare moorland like a stage. At each barrage, we froze, playing statues lest our movement was picked out by Argentine marksmen.

Daylight came on, with the battle plan stalling severely. David and I were with the advancing battalion HQ when the report ‘Sunray is down’ came over the radio – the colonel had been wounded and was dying. Next to us, Major Chris Keeble, the second in command, then set off to take over.

The sun came out briefly and we passed knots of Argentine prisoners, and the medics at the Regimental Aid Post, carrying out amputations, helping the wounded, and laying out the dead.

We struggled through the gorse to gain the ridge, only to be greeted by a heavy spattering of mortar fire from Goose Green itself, a mile and more further down the isthmus. We didn’t get much further, until the fighting died down at dusk.

The following morning, Major Keeble and a small group, with us two reporters as witnesses, set out to parlay with the Argentine commanders by the grass airfield. I could follow almost all the talk, deploying my Italian.

Astonishingly, it dawned that the Argentines felt cut off and wanted out. The trick was to allow them some grace, a sense of honour and bella figura, and avoid talking about the 120 islander hostages banged up in the village hall – a very strong card.

It all worked and the defending force laid down arms in two shifts. It was a huge gamble, not least because the paras surrounding the settlement were down to a few rounds of ammunition each.

I only learnt this on walking the battle ground on my return. This time, everything was laid bare in brilliant summer sunlight – as it wasn’t in May 1982.

It was an odd experience to reflect on the scene then and now. All four of us had differing memories of quite separate dramas, each isolated from the other.

I saw a lot with my fellow reporter that day in 1982 – and, this time around, I learnt a lot that we didn’t see then.

Now, I could see how strong the Argentine positions on the Gorse Line were. The abiding impression was quite how improvised the whole skirmish was. The intelligence was poor; and communication with supporting units and the brigade HQ were sketchy at times. Did they know the paras were all but out of ammunition, and how the colonel was killed, for example?

‘It was the last of the wars,’ Chip Chapman observed as we walked the ground. ‘No satellite phones. Radios that broke down – we were on own.’

Norris and I went into the battle with no flak jacket, myself with a cork, parachuting helmet with a gouge in the top to house three helpings of morphine. Ten years on in Bosnia, it would be flak jackets, health and safety compliance and armour-plated Land Rovers.

Goose Green was a decisive hinge in the British expedition to take back the Falklands. It came a week after the landing at San Carlos; in that time, four ships had been sunk and more damaged. Like the Battle of Jutland in 1916, it was the moment when the whole war could have been lost in an afternoon. If the paras had been driven back, the war would have stopped. It would have been the end to the government and the era of Mrs Thatcher.

I probably didn’t understand much at the time, but I am clear now on two things. As ever, I am lucky to be alive, and the outcome of the battle at Goose Green was a complete, bloody fluke.

Robert Fox is defence correspondent of the Evening Standard

AN Wilson on Brideshead Revisited