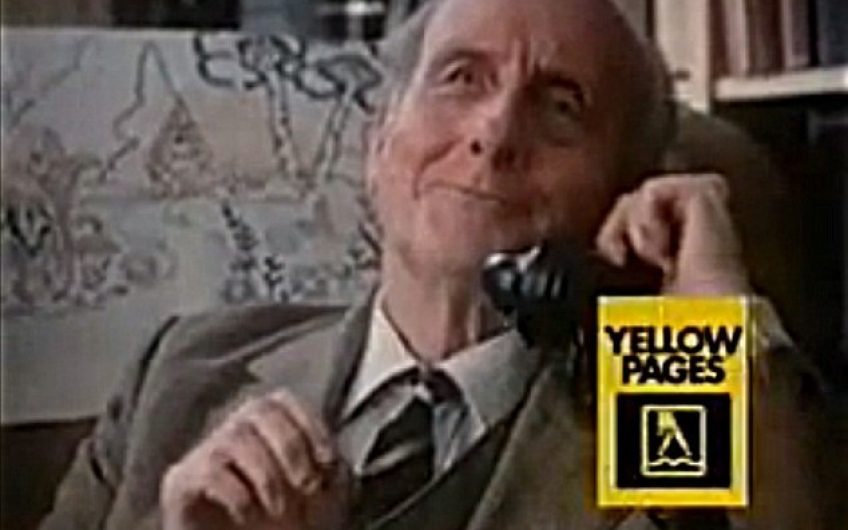 I am thinking of getting a blue plaque for our house, inscribed, ‘Here, in 1983, J R Hartley searched in the Yellow Pages for a copy of Fly Fishing by J R Hartley.’  Last weekend, when the BBC’s six o'clock news bulletin announced that Yellow Pages will soon be no more, they mentioned  the J R Hartley ad.

I am sitting now in J R Hartley’s chair. I still live in that house, which a location man from an advertising agency happened to drive past in the summer of 1983.

I was standing on the  front steps  when he stopped. ‘A TV commercial? Come in!’  I cried, practically lassoing him into the hall. Into that hall, poor old J R Hartley would stagger, exhausted from walking round bookshops, so his daughter would say, ‘Dad, why not try the Yellow Pages?’

The shoot happened on the hottest day of the year. The producer, John Cigarini, strolled in at midday in shades and T-shirt, ignoring me (an elephantine hausfrau, eight months pregnant), and startled the nanny and children by placing his trainers on the kitchen table, seizing our phone and dictating a long Sunday Times classified ad: ‘1969 Mercedes convertible for sale – whitewall tyres, stereo system’ etc.  The cheek! He then went outside, fell into his open-top Merc and snoozed all afternoon while his crew toiled on.

Later he sent me a snapshot of himself riding a pushbike: ‘This explains why I had to sell my car:  I was being done for drunk driving.’  But to everyone’s surprise, J R Hartley was the hit commercial of the decade, spawning many comic sketches and cartoons, and turning Norman Lumsden into a minor celebrity. And in December 1991 a spoof book called Fly Fishing by J R Hartley - actually by Michael Russell - topped the Sunday Times bestseller list.  You can still see the ad - on YouTube, along with a parody by Fry and Laurie.

We're now in the dog days of summer