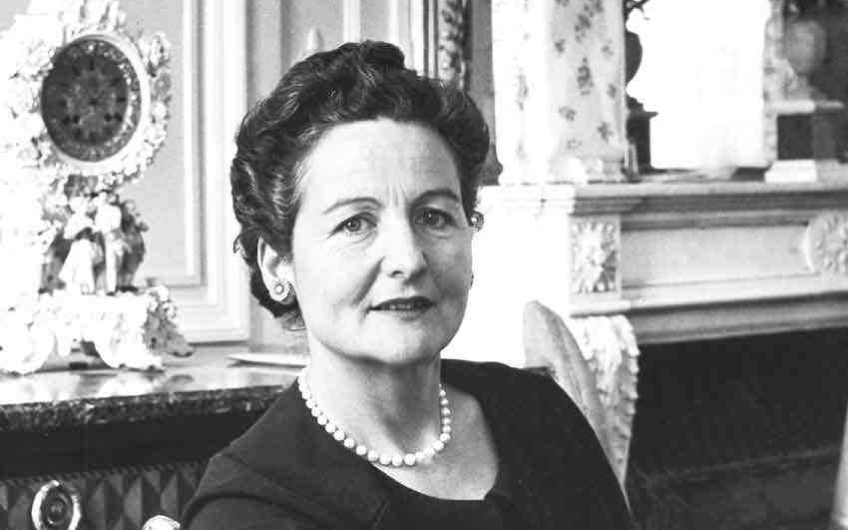 The inspirations for the writer’s hit novel – and the BBC series – were her father and her faithless lover. By Selina Hastings

The Pursuit of Love, published on 10th December 1945, was an instant and phenomenal success.

If ever there were a case of the right book at the right time, this was it. Funny, frivolous and sweepingly romantic, it was the perfect antidote to the long war years of hardship and austerity, providing an undernourished public with its favourite ingredients: love, childhood and the English upper classes.

Far more even than Nancy Mitford’s previous novels, The Pursuit of Love – adapted for a new BBC series this spring – is intensely autobiographical.

The heroine, Linda Radlett, is beautiful, feckless and sensitive, one of the seven children of Matthew Alconleigh, an eccentric backwoods peer known for his defiant philistinism and the terrible force of his temper.

The hero is Fabrice – a portrait of Gaston Palewski, Nancy Mitford’s lover, a French politician, known as Colonel, down to the smallest detail, from his demands to be entertained (‘Alors, racontez!’) to his habit of bursting into little snatches of song, and even the face he makes when knotting his tie.

But the character who dominates all the others, just as he dominates his own large family, is Lord Alconleigh, Uncle Matthew, a portrait of Nancy Mitford’s father, Lord Redesdale, in all his glory, drawn with that devastating combination of caricature and unerring psychological accuracy which is one of Nancy’s greatest gifts as a novelist.

Irascible, unreasonable and good-natured, there he is cracking his stock whips on the lawn, up at dawn and roaring at the housemaids, his eyes flashing a furious blue as he repeats his unshakable conviction that ‘abroad is unutterably bloody and foreigners are fiends!’.

There is his favourite epithet ‘sewer’, his favourite records (‘Fearful the death of the diver must be/ Walking alone in the de-he-he-he-he-epths of the sea’) and his habit of falling asleep at the dinner table.

Although in middle age she became convinced that she had never been fond of either of her parents, Nancy’s depiction of her father as Uncle Matthew is deeply affectionate. Frightening and funny, he is also endearing. Nancy was speaking her own mind in these words of Fanny’s: ‘Much as we feared, much as we disapproved of, passionately as we sometimes hated Uncle Matthew, he still remained for us a sort of criterion of English manhood; there seemed something not quite right about any man who greatly differed from him.’

Nancy wrote the novel from beginning to end in three months. Never before had she found a book so effortless to write, and never would she again. It was as though falling in love had given her access to a creative source of which previously she had barely skimmed the surface.

Evelyn Waugh read the manuscript, and it was he who suggested the title. Nancy’s publisher, Hamish Hamilton, had no hesitation in declaring his enthusiasm for Pursuit (‘the word brilliant has been used’). He recognised it as a winner from the first, asking for only a few, very minor, editorial changes: ‘p. 252 – re Dunkirk. I know exactly what Linda means and I think she would probably have said it, but I have a hunch that Miss Mitford ought to tone down line 6. There are just too many people who didn’t think it Heaven.’

His faith in Linda was amply repaid. The critics praised it – ‘Highly diverting from the first to the last page’; ‘More truth, more sincerity, and more laughter than in a year’s output of novels’. The public bought it, read it and, it sometimes seemed, talked of little else.

From all sides the congratulations poured in.

‘Clever, clever Nancy,’ wrote John Betjeman, ‘I am proud to know you.’

Uncle Matthew, whose opinion was awaited with some trepidation, ‘sat with his nose in the book & grunted out various corrections: “Never got the stock whips in Canada, a bloke from Australia gave them to me” & so on. He was delighted with it but cried at the end.’

The opinion that mattered most was that of the book’s begetter. Colonel was pleased with his portrait as Duc de Sauveterre, although constrained to point out that French dukes were not in life like that. ‘He then introduced me to one & indeed he can hardly have been more like the late Harrington & less like Fabrice. Still – fiction.’

He had been flattered, too, by Nancy’s dedication ‘To Gaston Palewski’ (‘Avec la dédicace, je dois entrer dans la gloire’).

But then, at the last moment, with the book already at the printer, he panicked, frightened that the Communist opposition would scent a scandal in his association with la soeur d’Unity Mitford, l’amie de Hitler. There was a flurried exchange of telegrams between Nancy and her publisher – ‘DELETE DEDICATION SUBSTITUTE LORD BERNERS’, ‘LEAVE GASTON IGNORE INSERTION PRINT AWAY’ – before Colonel calmed himself and allowed the dedication to stand.

‘Please never let Gerald [Lord Berners] know,’ Nancy implored Hamilton. ‘I count on you to be like a doctor & never tell tho it’s almost more than I can expect.’

Much as Nancy had been gratified by Linda’s enormous success, she could not feel happy while the cruel grey English Channel separated her (in England) from all she loved best in Paris.

Her own idea was to get back to the Colonel as quickly as possible, for not only did she miss him but she knew very well that if she were away from him for long, she would lose him.

There was that terrible roving eye of his, and she had been badly frightened by how hard she had had to work to re-establish herself after their year’s absence from each other during the war. The Colonel was out of power now, General de Gaulle having resigned in January, and his future was uncertain.

When he did write or telephone, it always gave her joy. ‘Your darling voice & your darling hand writing within an hour of each other is almost too much happiness. And I suppose the next best thing to having one’s sentiments returned is to have them appreciated.’

But when she did not hear, she was miserable. ‘Dear darling Colonel I think of you all the time – don’t leave me for ever without a word of what is happening to you.’

She continued to live in Paris and love the Colonel for the next 25 years, until one morning in March 1969, when a small announcement appeared in the Figaro: ‘Nous sommes heureux d’annoncer le mariage de M Gaston Palewski avec Violette de Talleyrand- Périgord duchesse de Sagan.’

The event that Nancy had been dreading for nearly 30 years had finally taken place: Colonel was married. It was almost literally a death blow (she died in 1973, aged 68, of the cancer that first emerged in 1968), the bitterness of it exacerbated by the fact that Gaston’s wife was a divorced woman. For years, Nancy had accepted the face-saving excuse that he could never marry her because he dare not risk his political career by marrying a divorcée.

Now retired from politics, he could marry where he chose, and his choice was not Nancy.

Selina Hastings is the author of Nancy Mitford (Random House)

Ambridge in Afghanistan - the soft power of The Archers. By Donna Freed