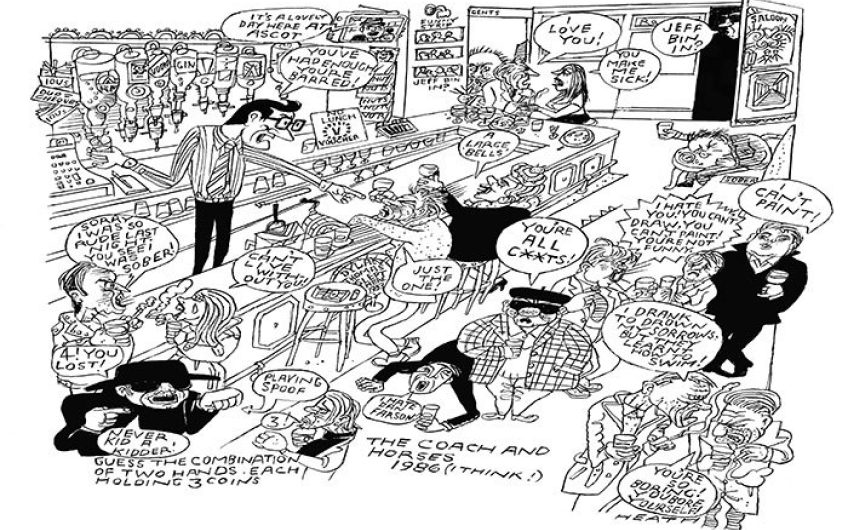 As it is announced that The Spirit of Soho show will open at the French House pub in September, Christopher Howse talks to Soho veteran and former landlord of the Coach & Horses pub, Norman Balon, 92.

I asked Norman Balon whether he really had been London’s Rudest Landlord, as he’d declared in big letters painted on the corner of the Coach and Horses in Soho.

It was his choice to meet there, which surprised me. Since it had been his life for most of his 92 years, I had thought he might shy away now that he’s retired.

‘About that rudeness thing. My brother, before he died, said, “A lot of people hate you.” I got a bit upset about that. I thought about it and said, “You’re quite right. They hate me because I tell them the truth about themselves, which they can’t stand.”

‘I always had an answer for everyone, and if someone was ugly, I would say so. We used to give away Christmas boxes, very cheap ones – bottle openers and mugs – and we didn’t know what to put on them. Then we thought of “London’s Rudest Landlord”.’

I’ve got some of those mugs at home, a different colour for every year, each with a cartoon of a lanky, stooped man in specs like television screens, pointing at a hapless customer and shouting, ‘You’re barred.’ The cartoon was by the brilliantly observational Michael Heath, who for Private Eye illustrated Great Bores, and based his strip The Regulars on the weird denizens of Norman’s pub.

When we met, Norman was looking forward to the revival of Jeffrey Bernard Is Unwell, first a hit with Peter O’Toole in 1989. Now it was having a season as an ‘immersive’ production in the very pub where it’s set.

The new production, starring Robert Bathurst, was planned as part of a publicity campaign by the present tenant, Alastair Choat (who has run the Coach since 2006), to prevent Fuller’s, the freeholders, from installing a manager in his place and making the pub a ‘soulless chain outfit’. Another publicity-worthy step was to make the pub vegetarian. I found it very quiet now, with a cat – and of course smokeless.

The world got to know about the Coach through Private Eye (which held its fortnightly lunches for informants upstairs) and the Spectator, for which Jeffrey Bernard wrote his weekly Low Life dispatches from the pub. In the 1980s, the Coach was fantastically popular: crowded as an Underground train. ‘I used to say that when someone fell off a bar stool dead there’d be someone waiting to take their place.’

Norman wasn’t born in the pub. His father was a Jewish insurance assessor in the City. His mother had decided to run a hotel in Bournemouth, until the war came and visitors were banned from the coast, which rather undermined the business plan. When her sister made a go of another Soho pub, the Red Lion, Norman’s father took on the tenancy of the Coach. It was 1943. The Blitz was over, but there were V-1 flying bombs and V-2 rockets to come. ‘We would go down to the cellar. Sometimes we slept in the Underground.’ The immediate problem was not bombs but mice. ‘The first night we found 22 in the slop bucket.’

Private Eye didn’t appear in the pub until the Sixties. Before that, gangsters ruled the roost. ‘Now listen to me,’ says Norman. ‘The police are all crooked. Frank Mifsud, the Maltese gangster, used to sit in the corner over there. At 11 o’clock closing time, a top man in the Vice Squad would ring for a squad car to take them to the Latin Quarter club – it was only 100 yards. The police took money. It would cost £500 to open a dirty book shop and £100 a week to keep it open.

‘I never had trouble with the police because I didn’t buy stolen property. A crowd of people used to sit there [at the Greek Street end], who were hoisters – shoplifters – and they’d say, “If you can’t take the time, don’t do the crime.” They certainly did the time. They’d turn up to court with their shaving gear, all ready.’

Once Private Eye moved into Soho, it began to use the Coach as a place to get work done as well as to have lunch. ‘I remember when Private Eye wanted to cut down on the price of lunches. I suggested doing without smoked salmon for starters, and Paul Foot, who was very keen on the Socialist Workers, said, “Oh no, we’ve got to have smoked salmon.” ’

‘The thing about the Private Eye people was that they all went to public school. They were insular. They were complete to themselves. Enough of them came in together so that they didn’t need to speak to anyone else. But I liked them. They treated me better than I deserved, a boy who left school at 16.

‘Richard Ingrams used to be a fantastic toper. He would sit over there, and he had a ring on one finger and he’d tap it against his glass – somebody’s turn to buy him a pint of beer. I don’t want to say anything bad about Richard. He’s a very great friend, if he could be a friend to anybody.’

Ingrams stopped drinking suddenly. Norman had done the same earlier and was only ever seen with a Coca-Cola, unless his friend Danny La Rue insisted he have a glass of champagne.

Danny La Rue was a popular female impersonator. In his heyday, no one publicly suggested that he might be homosexual, which he happened to be; that would have been libellous.

In Soho, no one much cared about anyone’s sexuality. ‘To my shame,’ Norman says of the past prejudices, ‘in the early days we didn’t serve a black man with a white woman. After the Normandy invasion, a lot of Americans came back on leave. One day a black man came in with a white woman and the customers all drew guns. F***ing madness. I stood between them. My brother ran upstairs and hid in the toilet and I was standing there like a lemon. I was too young to realise the danger.’

Norman never did show fear. ‘Jeffrey Bernard said I couldn’t punch my way out of a paper bag. But I had the ability to talk to people. It’s a knack.’

Jeffrey claimed to have invented Norman, while Norman was a midwife to Jeffrey’s writing. ‘Jeffrey Bernard was a peculiar person. He was extremely selfish, which people don’t realise.’ Yet I’d concluded over the years that Norman loved Jeffrey. He even kept his favourite cigarettes in a cupboard on the bar stairs for him. ‘Jeffrey was a lost soul, really. He couldn’t get on with women, even though he had a remarkable power of attraction.

‘You might not believe it. I don’t know and don’t care. But I tried to stop people drinking too much. I had a big income from the pub – so it didn’t cost me much to try to look after people. People like Jeffrey Bernard were too far gone.

‘But the regulars were personalities. I liked it. Listen to me. The worst mistake I ever made was selling the pub. But I was 80. I couldn’t run it. I’m upset to this day that I’m not running it.’

Now he lives in Golders Green with his small, formidable wife, Grazia, a Venetian from the original ghetto. ‘Times have changed. This pub has changed. If something stays the same, it dies. Soho has become semi-gentrified. Poverty Corner has gone, where waiters used to stand to get work, next to Coleman Cohen’s, where they had a gas flame in a glass tube on the counter for people to light their cigars. Everything changes.

The Duchess of Sussex likes using her own title - why does she get other people's wrong? By Harry Mount