Oh to be a pilgrim – Peter Stanford 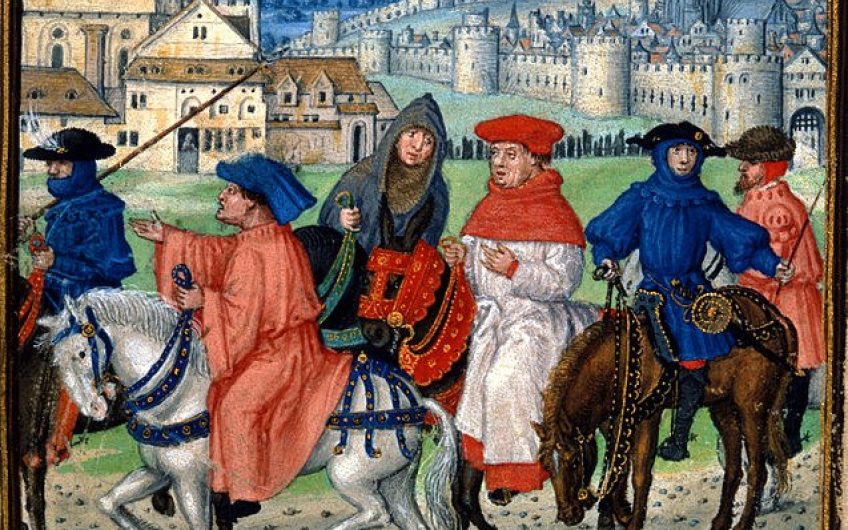 Visiting the medieval abbey of Moissac in southwest France, eagle-eyed Alan Bennett spotted what he took to be a group on a walking holiday. When told they were not hikers but pilgrims on the early stages of the Camino, he confessed to his diary that he couldn’t detect the difference. “They look exactly like the eager middle-aged walkers we see at home,” he complained, “where their pilgrimage is to the top of Ingleborough” [the peak near his Yorkshire village].

A similarly dismissive sentiment is often aired when the startling figures are quoted about the spectacular rise in recent (pre-Covid) times in numbers on the Camino, the medieval pilgrim route that stretches down through France, over the Pyrenees and across northern Spain to Santiago de Compostela, reputedly the final resting of James the Apostle. In the early 1980s, there were just a few thousands each year completing the necessary 100 kilometres to claim their reward at the Pilgrims Bureau in the Spanish city in the form of a certificate (or compostela). By 2019 it was 350,000.

A sign that religion isn’t quite as dead and dying in the Western world, as we are repeatedly told? No, comes back the answer. These aren’t “proper” pilgrims, like the medieval ones found in Chaucer’s Canterbury Tales. They are just holiday-makers who fancy a decent long walk, lovely countryside, a bit of history and the companionship of the road along the way.

Well, I am not sure how “proper” Chaucer’s Wife of Bath was – or his other pilgrims for that matter. She was, he makes clear, as keen on a good time and getting away from it all as any modern-day hiker. But more importantly putting down the Camino “phenomenon”, and its various off shoots from the revived Via Francigena from Canterbury to Rome, or the restored North Wales Pilgrim’s Way, to clever branding by tour operators potentially misses something more significant going on under our noses.

Granted, only 43 per cent of those walking the Camino route describe their motivations as “religious” (and they include Shirley MacLaine who took religion to mean feeling the earth’s spiritual energy along ley lines when she did her stint on the Camino). But if modern pilgrimage is religion-lite, it still has its spiritual dimension. Even among the more than 50 per cent on the Camino who disclaim the label of religious, there are sizeable numbers who arrive at journey’s end in Santiago to stand before the apostle’s tomb in the city’s cathedral and talk of how the experience has changed them – and not just in terms of getting a tan and firmer muscles.

You can glimpse in microcosm how this process works in the findings of a recent survey of those who each year visit York Minster, mother church of Christianity in northern England since the seventh century. Nine in ten of those going in said when questioned that they had no conscious intention of saying a prayer. Yet nearly half subsequently reported having been sufficiently moved once inside by something they struggled to name that they lit a candle or left a written prayer.

Guy Stagg, whose acclaimed 2018 book The Crossway recorded his walk on another ancient pilgrim path from Canterbury to Jerusalem, describes being “drawn upward”, despite having set out with no sense of religious purpose. Walking in the footsteps of countless previous generations of pilgrims over centuries - if not millennia in the case of the Buddha trail of northern India, or the 88 Temple route on Japan’s Shikoku island (both of which were sharing in the contemporary pre-Covid boom in pilgrimage) - quite simply gets under even the most hardened skin.

The American cultural historian, Rebecca Solnit, witnessed it on the Camino spin-off at Chimayo in New Mexico. Its early nineteenth-century abode church had long hosted Easter processions by believers, but it has now developed its own 115-mile Camino del Norte trail.

‘The town exudes a sense of ancientness that sets it apart from the rest of the forgetful United States,” she wrote. “Walking cross-country let us be in that non-believer’s paradise, nature, before we arrived at this most traditional of religious destinations.”

And I have seen it, too, in researching and writing a book on 20 major pilgrimage sites around the globe. These places are more than an alternative for the more adventurous to a beach in Greece or a villa in Tuscany. There is, whether the twenty-first-century pilgrim wants to connect with it or not, a transcendent dimension that is bound up with these places. It doesn’t matter if those setting out on the route have little or no interest in religion, or more widely in faith, or to extend it further still, in that vague, immediately attractive cousin of both of the above, namely spirituality. Walking along a pilgrim road is, as TS Eliot pinpointed it after a visit to Little Gidding, the seventeenth-century home of a high-minded Anglican community in Cambridgeshire, not to “instruct yourself, or inform curiosity/Or carry report. You are here to kneel/Where prayer has been valid.”

That is what makes them different and that past is not so easily shaken off. Whether the glories of God, the gods or the environment, what many modern-day pilgrims appear to be engaging with is a search for meaning. And that is implicit in the term pilgrimage. It is what sets it apart from plain tourism.

The Camino may have seen an 85 per cent downturn in numbers last year because of Covid, but if and when it starts to open up again later this year, or next, it may be filled with people who look like hikers on holiday. But look again. They are also sharing a path and a purpose with pilgrims down the ages.

Peter Stanford’s Pilgrimage: Journeys of Meaning is published by Thames & Hudson at £25

The Mooch, King of the Nouveau Riche Italians