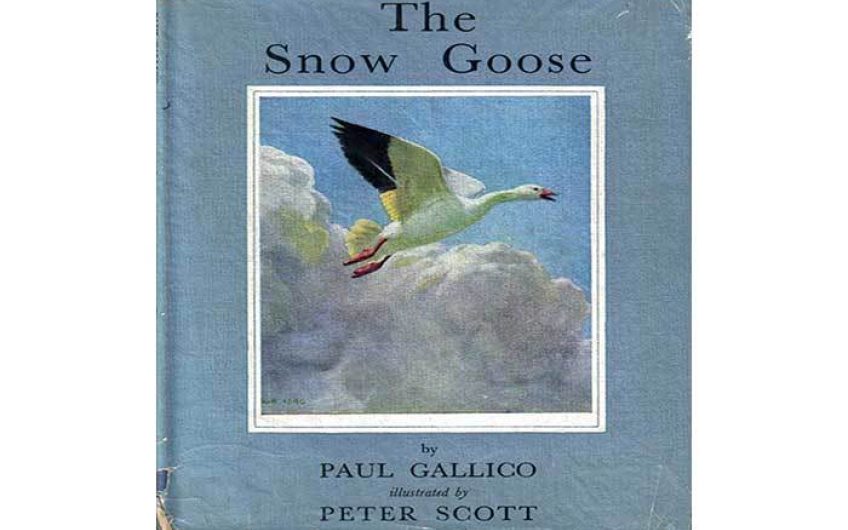 1946 edition of The Snow Goose, illustrated by Peter Scott
View Full Size
1
of 1

Not long after the evacuation from Dunkirk, a story began to circulate about ‘a big white bird’ seen hovering over the devastated beaches; where it appeared, rescue was certain to follow. Extraordinarily, the bird seemed to have been a large snow goose, rarely a visitor to Europe and unlikely to be seen there at the end of May. The vision became a legend of Operation Dynamo – but it actually originated almost a year later in the pages of the Saturday Evening Post in America as a short story by a writer of whom few people, certainly in England, had heard: Paul Gallico.

One the face of it, Gallico might seem an unlikely candidate for the authorship of what one critic called the most sentimental story ever to have been published by a decent publishing firm. He started his career as a sports journalist by inviting the heavyweight champion of the world to knock him out. The knock-out was all too real, and the ambitious young man may have regretted his invitation to Jack Dempsey; but the exploit paid off – within a few years Gallico was sports editor of the New York Daily News and one of the highest-paid sports writers in America. That career didn’t last long – sports enthusiasts still read his much anthologised essay, ‘Farewell to Sport’, in which he announced he was giving up interviewing golfers and pugilists, baseball players and athletes, and going in for fiction.

It wasn’t a bad decision – by 1936 he was living on a hill above Salcombe, in Devon, with a Great Dane and 23 cats, making a decent living as a short story writer. It was in 1941 that he delivered his own knock-out blow in the form of a long short story, The Snow Goose, which appeared in the Saturday Evening Post, won him the O. Henry Award, and as a very slim volume became one of the bestsellers of the 1940s – during the last years of the war almost every house seemed to have a copy.

Only ‘common readers’ thought well of it. The English critic Julian Symons invoked Oscar Wilde’s sneer at the death of Little Nell: ‘One must have a heart of stone not to read The Snow Goose without laughing’; some librarians filed it under ‘tear-jerkers’.

The plot is a simple one: Rhayader, an ugly, hunchbacked artist, lives on the Essex coast, devoting himself to painting the wildlife and running a small bird sanctuary. One day a young local girl, Fritha, brings him a wounded snow goose, caught in a storm and blown seriously off-course. The bird is saved, each year returns to Essex and eventually becomes a fixture at the sanctuary. When the artist sails his small boat to Dunkirk and rescues a number of troops, the bird hovers above him, and the legend of the Big White Bird is born. The artist is machine-gunned and killed, the bird perching on his boat, guarding the body until it sinks before returning to the sanctuary where Fritha, the love between her and the artist never declared, watches it spiral up and up and away, ‘the soul of Rhayader taking farewell of her before departing forever.’

Well, yes, really, it should be a stinker. But, as a discerning critic wrote at the time, Gallico ‘makes use of every timeless appeal that could be crowded into the story,’ his tongue never for a moment anywhere near his cheek. He saw himself ‘simply as a story-teller’ – well, one has heard that line before, but in this case it is the fact. His style is so simple it is scarcely a style at all, his sentimentality so unpretentious that many early readers believed his book a re-telling of an actual folk legend; he had to write to many correspondents assuring them that he had made the whole thing up.

The Snow Goose has been twinned with another even more saccharine short story, The Small Miracle, in which an irresistibly adorable small Italian boy, Pepino, interviews the Pope to ask for a special dispensation to take his even more adorable sick donkey, Violetta (who has the interesting asinine quality of always smiling) into the crypt of the church of St Francis in Assisi to be cured by the saint’s intervention. Less conviction from the author, but equally damp eyes from many readers

Gallico went on to write twenty film scripts, twelve TV films, many short stories and over forty full-length novels. There were successes – Mrs ’Arris Goes to Paris, about a Cockney charwoman, sold well and had three sequels; The Silent Miaow, a cat’s guide to dealing with humans, remains a classic of a sort; The Poseidon Adventure was a flop until after the blockbuster film. But there was never anything like The Snow Goose.

Kerala – after the waters have retreated

Clean, uncrowded, on time and civilised: what’s not to like on German trains?