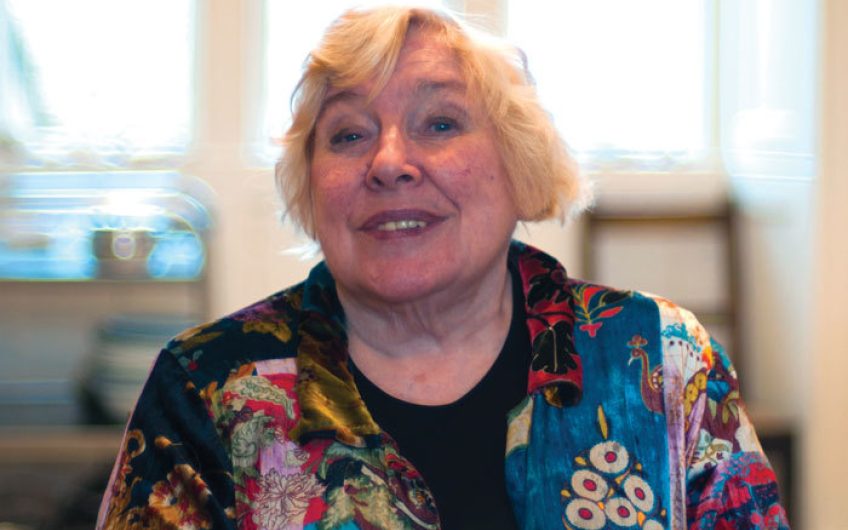 Fay Weldon CBE was born in New Zealand in 1931 and came to the UK in 1946. She has written 34 novels, numerous TV dramas, several radio plays, five full-length stage plays and five collections of short stories. She studied economics and worked in advertising before her first novel was published in 1967. Long Live the King, published in April, is the sequel to last year’s Habits of the House and is set in 1902. She lives in Dorset with third husband Nick Fox, and has four children and six grandchildren.

You were in your mother’s womb at the time of the devastating Napier earthquake in 1931. What effect has that had on you?

It made me feel significant and a bit cosmic and not afraid of upheaval. I’ve always pursued drama rather than caution and have always believed it’s best to hold your nose and jump. Things happen – you find yourself in situations and react in the only way you can.

Does wisdom come with age?

Yes, if only because you know what’s going to happen next inasmuch as something like it has happened before. Some people think it makes you cynical, but you’re not.

With your last two novels you’ve returned to Upstairs Downstairs which you wrote in 1971.

Upstairs Downstairs was difficult. The cast wanted to be loved and loveable. I got fired because I wouldn’t make them loveable. Loveable is boring. You don’t have friends who are nice. You don’t think ‘That’s a nice person, I’ll be their friend’, do you? What would there be to talk about?

When does one identify oneself as old?

At eighty. Before then you pretend you’re younger – but when you’re eighty you realise there are advantages.

You can babble on at parties. Once upon a time you’d go away thinking, ‘Oh my God, did I make any sense?’ Nowadays you know it doesn’t make sense, but it doesn’t matter. I don’t feel any different, but the world looks at you differently. The natural thing is for the young to wish the old to be dead. But more and more we just won’t die. So many of us.

And the bad things?

I miss physical sprightliness. I was looking at a three-year-old the other day and thinking it would be wonderful to be that size and shape, a body that makes you more spirit than flesh. As you get older you get to be more body than spirit, although you’re heading for spirit without body.

You became a Christian in your seventies. Why was that?

There was no sudden bright light on the road to Damascus. I went to a Catholic convent as a child and prayers were said seven times a day, and seven times a day I was sent out of the classroom for being a heathen. So perhaps I always just wanted to belong. Then years later, when I went to an Anglican church in Hampstead, I found I really enjoyed singing hymns – George Herbert’s ‘Let all the world in every corner sing’, ‘To be a pilgrim’, ‘Fight the good fight with all thy might’. So I joined. I like simple moral instruction.

Do you think about death more as you get older?

I was with her when she died aged ninety-four. She was too brave to say anything but we knew from her expression that she was frightened of the unknown. Our society behaves as if we’re going to stay young and live forever. We ignore the fact that we are temporary. I’m long past my three score years and ten, which I reckon is probably all one can adequately deal with.

As a Christian, you presumably believe in the afterlife?

I’ve had a couple of ‘near-death’ experiences under anaesthetic. In one I saw the proverbial light at the end of the tunnel, and there was certainly an extraordinary sense of warmth, communality and progress. The other time I saw pearly gates in garish Hindu-temple colours. They were double glazed and when they were pushed back I got a rather convincing glimpse of the other side. It was just more of the same – hard work, two steps forward, one step back.

Who has had a major influence on you?

My mother. She had a difficult life, to some extent self-imposed. She said if you enjoy something it’ll probably be immoral or fattening.

So one saw a moral engagement with everything one did or said or thought, which was good, but not convenient. I assumed my function as a youngest child was to be cheerful, so I worked at it, with the result that nobody ever took me seriously.

Do you feel more comfortable in yourself as you get older?

I don’t think I was ever uncomfortable. I’m always baffled by people trying to find their ‘true self’ – there isn’t one. We’re a bundle of opinions and experiences which add up to a person recognisable to others, and that’s all you can hope for.

When you were 63 you said women ‘dwindle’ and should ‘de-dwindle’ by having plastic surgery.

I had my eyes done in Hollywood ages ago, but the thing about plastic surgery is that people’s faces grow back almost at once.

Have you got any possessions that you had in childhood?

Yes, Ferdinand the Bull, a book my father gave me when I was seven. Ferdinand is a gentle bull who was taken off to the bullfights but wouldn’t fight, preferring just to ‘smell the flowers in the ladies’ hats’. He was only thought aggressive because he’d sat on a bee when the talent-spotter from the bullring visited.

My mother, sister and I came from New Zealand to grey England like refugees in 1946. My mother threw everything overboard on the way because she was so sick of carrying stuff around, but Ferdinand somehow survived. We arrived from a nice safe country to a war-torn, cold, hungry one, with nowhere to go and nothing but what we could carry.

What lessons has life taught you?

That things proceed in waves, they get better and they get worse and you might as well accept it. You’re either on an up-slope or a down-slope, and there’s nothing much you can do about it, so you might as well just eat toast and jam. Don’t believe what you’re told, because people tell you what it’s convenient to tell you.

You have been an icon for feminists but have also outraged them – where do you stand now?

I didn’t set out to preach. I was writing novels in which there was a view of the world around me dictated by the society we were living in. Life was grossly unfair and insulting to women in the 1970s.

You think everybody must think the same as you but they don’t. Later on I realised I was a middle-class woman trying to impose my opinions on women who really just wanted to get on and have babies. I think the vast majority would rather stay at home and be kept by a man and chatter to the neighbours than go to work. If I didn’t have a particular sort of work that’s probably what I’d do.

You take a dim view of men in your novels, particularly in The Life and Loves of a She Devil and Down Among the Women.

I remember thinking later on that what I said about those men was disgraceful. Men and women are different species. You attempt to relate to them over the gap as best you can, but why expect them to be anything other than what they are?

What do you think of the changes in the state of the world in your life time?

One only knows one’s own little pocket of the world. Mine seems in a worse state than when I arrived in 1946. There was a feeling, then, of building things, of hope and change, and people working together to survive, far more than there is now. The world looks very gloomy to younger generations. We had the best of it.