Pearls of wisdon from Shirley Hughes 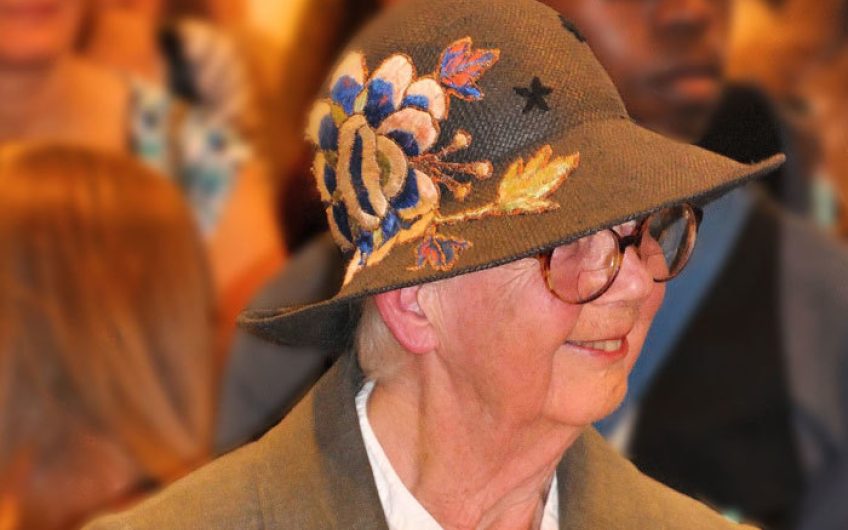 Shirley Hughes OBE, 92, is the award- winning illustrator and creator of Alfie, Dogger and many others – she has so many children’s books to her name she has lost count. She grew up in the Wirral, but has lived in the same house in Notting Hill Gate for 53 years. She has three children and seven grandchildren.

In one interview you said ‘I jazz about a lot when I’m washing up.’ What do you do?

I have music on – I like Louis Armstrong, Buck Clayton, Billie Holiday with Lester Young lovingly coaxing her along in the background. I dance given half a chance, but I have no one to dance with now because I’m living on my own.

You were widowed 12 years ago – that must be really hard.

Yes, it is, but I’ve kept working. I go to my studio every day at half past nine and I’m on deadlines. Working keeps your brain in your head. During the week

I was holding it together but you can’t work all the time and weekends were, and still are, absolute hell without John. But I started writing a novel. I had never done that and it kept me going. What really kept me going was my three grown-up children who live in London and my seven grandchildren; I see a lot of them.

Did your children or grandchildren in- spire the characters in your stories?

What inspires my drawings is hanging about with a sketch book and watching. Observation inspires my writing for children – you get a feel for them, how they stand when they’re unsure of themselves, running off like birds, jumping for joy. I get the mindset of a child – getting your boots on the right feet or going to a birthday party alone for the first time. These things are serious for small children. I have very good recall of my own childhood. I remember the girl next door who sometimes liked me and sometimes didn’t. I was bullied at school, it was awful. I remember the emotions and they come out in the drawing.

What are the bad things about getting older?

You worry about becoming incapacitated, becoming a burden. My sight and hearing are excellent, mobility’s fine. But as you get older the energy dwindles, although you don’t feel different within.

I have completely given up travel. I had wonderful times wandering about with John in Italy with sketchbooks, butIdon’twanttogoonatriponmy own or on a tour with a lot of people I don’t know. The doors of Heathrow open to me as to the gates of hell. I love walking around locally. When you are older, people are so kind. Recently some delightful chap came along as I was dithering on a kerbside and said, ‘Shall we risk this together?’

What transformed the world in your lifetime?

The war, of course. I was 13 when it started. We lived on the Wirral and the Luftwaffe bombed the hell out of Liverpool. We were in a safe area and I never thought I would be killed. At that age you’re much more worried about how to get a pair of nylons. The other thing which transformed my life was leaving the Wirral, a very nice place, but your main aim, one inferred, was to meet a nice young man with decent prospects: go down the tennis cub in white shorts and secure that engagement ring. I found this stultifying. I took off to Oxford after art school in Liverpool, to Ruskin, where I thought I’d have fun, meet young men and go to parties.

What inventions have had the most impact in your life time? Washing machines! I washed nappies by hand. There was always that bucket full of nappies waiting to be washed somewhere in the background. The washing machine set people free.

As a child I went to the Walker Gallery. It was full of paintings which tell a story like And When Did You Last See Your Father? so I grew up with narrative painting. I wanted to design clothes, but at Ruskin a tutor suggested I become an illustrator.

The biggest influence on me as an artist was Edward Ardizzone, I read his books to my children, and knew him when he was old. He had that quality of relaxation – when someone does something so well you almost don’t notice them doing it.

to the People and the hairs on the back of my neck stood up. From a position of enormous scholarship he made it accessible – a wonderful gift. Simon Schama and Neil MacGregor also have it.

How are you with modern technology?

I don’t have a computer. You don’t want to turn into one of these elderly people who rings up their son-in-law and says I think I pressed the wrong button, dear. I write longhand. My editor says it’s a much more careful kind of prose. I’m terribly slow. A paragraph can take me a whole morning.

Would you do anything differently if you started again? Worry less. I wish I’d been more relaxed.

Do you believe in God?

I don’t believe in any creed, but I envy people who have a faith. I’m not a member of the church but if churches weren’t there it would be desolate. It’s terrible to think of them being made into luxury flats because it’s great to have a place where you can walk in off the street and leave the distractions and harassment of life outside.

Has the world changed for the worse in your lifetime? No, it’s just changed. In many ways it’s better. There’s never been a golden age of childhood but people are more concerned about how children feel, how to give them a sense of belonging and to look out at the world. It’s much better in this country than fifty years ago.

The problem is that children’s reactions are being speeded up too fast and they never have time to be bored. They’re over-stimulated. I became an artist because I grew up in the war and there was nothing to do, so I made up stories and did drawings.

Do we get wiser as we get older?

Yes, you’ve been through it all before so you see things more in proportion – you hope you don’t get so rattled.

Do you own anything from childhood?

Yes: a Sunny Jim rag doll given away with corn flakes and a magazine I wrote and drew when I was seven. It has an exciting serial in it called ‘The Wreckless Three.’

If you could tell the world one thing what would it be? It’s all about love and hard work.

When the snow turns green

What languages did Jesus speak?

Exams must be difficult