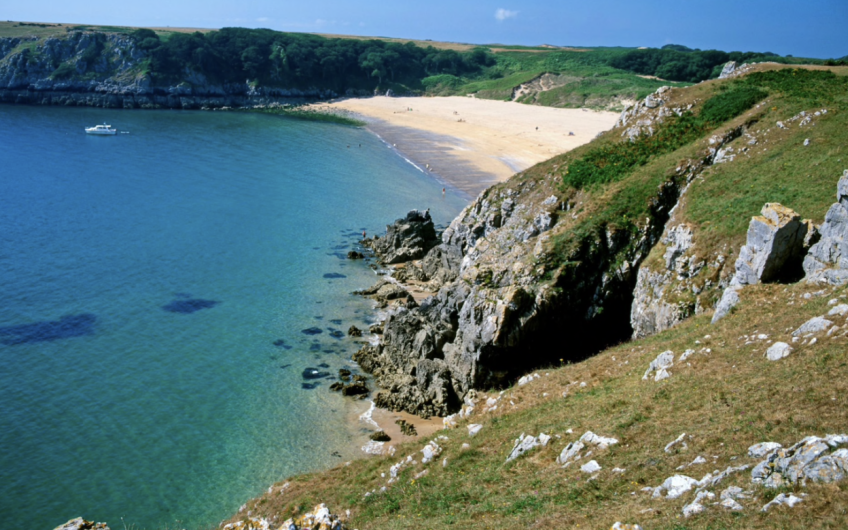 I’m standing on a beach in South Wales – and I’m completely naked and letting the warm sun dry me off. Because I've just been swimming in the sea (which on a bright day like this doesn't feel anywhere near as cold as you might fear) and because I neglected to bring a towel with me. I should hasten to add that there is no one else on the sands at Porthmynawyd Bay, and in fact no one else probably for a mile or so in either direction along the coast. That’s why I couldn't resist discarding my clothes for a quick impromptu dip...

I was almost as far west as you can go in Wales, walking along a five-mile stretch of the Pembrokeshire Coast Path between the seaside villages of Newgale and Solva, and had lost count of the number of amazing beaches I was passing, many of them impossible to get down to because they were framed by equally amazing steep cliffs. The up-ended layers of rock that constitute the cliffs all along this coast are millions of years old, and they form almost motile sculptures as they simultaneously seem to thrust out of cleave into the sand and the sea.

Before leaving Newgale I had walked along most of its wide, two-mile-long beach, through a mist of sea-water droplets hanging in the air, watching great white waves come rolling in. Everything about the place reminded me more of Australia than the British Isles – apart from the cloud-filled sky. But as I began to climb the steep, steep path up the cliffs at the north end of the beach, the sun appeared and transformed the landscape, just as it had done on every day I’d walked that week.

Halfway up, I stopped to catch the views and my breath, and was met by a local woman walking her dog back down to Newgale. I told her how lucky she was to be living in this remarkable spot. ‘Yes,’ she said. ‘It’s remote. It takes a long time to get anywhere from here. But this place is wonderful – it’s real life.’ It certainly is. And it doesn’t get much better than walking on green-topped cliffs, with a vast blue sky and clear air all around you, and an apparently endless ocean disappearing into the indistinct horizon – something I was lucky enough to do each day of my off-season stay in Pembrokeshire and which showed you can enjoy the walking here at any time of the year.

Based in the pretty village of St Florence (a couple of miles from the sea, although two centuries ago, before the river silted up, boats used to tie up here) I could take my pick of great walks: some on, some off the Coast Path. From Stackpole Quay I was able to walk straight up onto the high cliffs above Barafundle Bay and look back across the sand at rock formations around 300 million years old. I followed the path all the way round Stackpole Head – like a gigantic green pier of land sticking out into the sea – and then west towards Broad Haven before turning inland through high dunes and grasses. This took me into the heart of the National Trust’s Stackpole Estate, via a path threading beside and over three small lakes and into quiet pine woods. I stopped off at a clearing to sense the mystery of the Devil’s Quoit, a lone standing stone thought to be the only remnant of a 1400 BC structure. And then it was back through trees and dunes to my starting point.

Farther west, a sizeable part of Pembrokeshire is taken up with a military zone and all that goes with that – thousands of acres of land out-of-bounds to walkers, and simultaneously conserved and disturbed by army manoeuvres. But the Castlemartin Training Area also has a clearly delineated footpath around it that links in with the Coast Path, and brings you down to Freshwater West – another wide, sandy beach, framed by rocks and culminating at its northern end in what could be an extraterrestrial display of weird red sandstone formations and rock pools.

To the west again, Marloes is a popular point for joining one of the most impressive stretches of the the Coast Path, which clings to the edge of the peninsula near Martin’s Haven. Wind and tide throw the sea against towering rocks at the edge of the land here, where puffins huddle on ledges to take respite from the elements. The clifftop path turns back eastward and starts to narrow, with hedges to your right and a vast, glassy sea to your left. It leads on to the lesser known Musslewick Sands, one more idyllic beach.

There are shorter walks that can be just as enjoyable as the longer ones. Wiseman’s Bridge is not far to the north of seasidey Saundersfoot – but while the latter is rather organised and settled, the former is more wildly attractive. I had the best of both worlds by dropping down by Wiseman’s Bridge Inn, with its protective wall of titanic boulders, onto the superwide beach and walking south via more little beaches to Saundersfoot.

And a walk around the seaside village of Manorbier, south of St Florence, was just as rewarding. Its twin peaks are commanded by a robust 12th-century castle, still intact, and the lovely Norman church of St James. Sitting in the churchyard, with couples parted by death but reunited in the grave, you get the optimum view of Manorbier’s beach, a confection of sand, sea and surrounding green slopes.

If this kind of ‘real life’ isn’t real enough for you and you crave a bit of civilisation, then there is always nearby Tenby, by the sea, with its contemporary buzzy restaurants and cafes, and ancient city walls and truly stunning castle ruins; and inland there is Narberth, with the same plus a side order of trendy shops and galleries. Their attractions may draw the crowds, but, for me, nothing can beat the lure of the Coast Path, the cliffs and that irresistible sea.

+ For latest news and features about Pembrokeshire: www.pembrokeshire.online