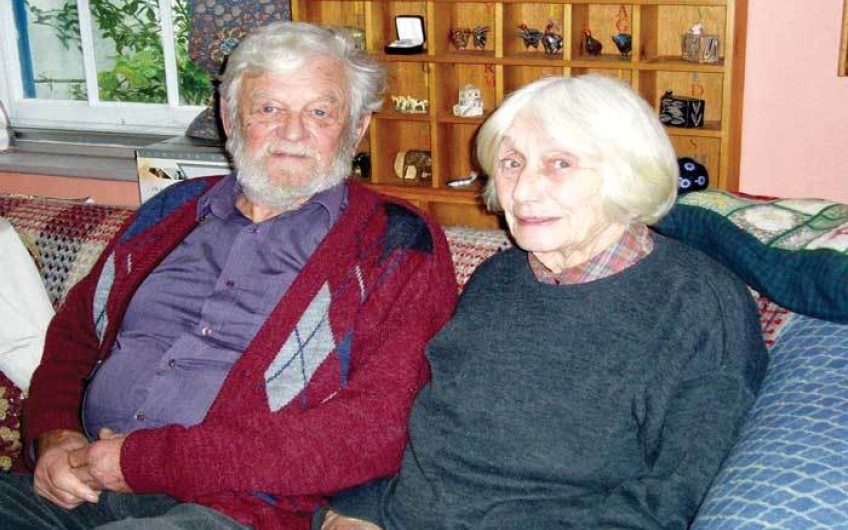 Peter and his wife Joan
View Full Size
1
of 1

Back in 2014, Alice Pitman met the artist and puppet maker, co-creator of the Pogles, Noggin the Nog and the Clangers, to talk about his relationship with Oliver Postgate, television then and now – and the Clangers revival

IN 1958 Peter Firmin was a lecturer at the Central School of Art and Design when he was approached by ‘a rather posh gentleman who said he was looking for someone to illustrate a television story’.

The gentleman was Oliver Postgate, a stage manager at Associated-Rediffusion. Unimpressed by the quality of children’s television at the time, he had come up with his own creation, Alexander the Mouse (who sets out to find his roots and discovers a royal lineage). Cartoonist John Glashan was originally hired to illustrate the stories, but the two men didn’t get on, both having very strong ideas about how the mice should look. Oliver was told if he didn’t want Glashan he would have to find his own artist.

‘I was a bit snobby about television in those days,’ chortles Peter. ‘We didn’t own one – and I thought it was coming down in the world to be a TV artist. But I needed the money, so I said I’d do it.’

What should have been a six-week job became a hugely successful partnership. They went on to form Smallfilms and for the next three decades crafted some of the best-loved children’s television of all time. Oliver wrote the script and narrated and Peter illustrated the characters and made the puppets. Their programmes became so deeply embedded in the psyche of generations of British children that the faces of young- and middle-aged adults light up with delight at the mention of Pogles’ Wood, Noggin the Nog or The Clangers.

Peter and I are having coffee by a blazing woodburning stove in the cosy front room at his farmhouse in Blean, Kent where he and his wife Joan have lived for the last fifty or so years. My dog (whom Peter has kindly invited in from the car) and his Jack Russell, Tiny Tim, make each other’s acquaintance as Peter relates how he and Joan met. ‘We were both at the same art college. One day we went to a wallpaper exhibition together and on the bus on the way I knew I wanted to spend the rest of my life with her.’ Within two weeks they were engaged. They went on to have six daughters and celebrated their diamond wedding anniversary last year with a big marquee in the garden. ‘I presented Joan with an engagement ring as the first time round the ring turned out to be a mourning ring!’

A gentle and modest man, Peter – a youthful 85 – seems to delight in the artistic achievements of his daughters more than in his own. An impressively eclectic mix of their prints and hand-painted china decorates the farmhouse (his daughter Hannah did the jacket illustrations for Alexander McCall Smith’s No. 1 Ladies’ Detective Agency series). En-route to the bathroom, I spy one of Peter’s most famous creations, Bagpuss ‘the saggy old cloth cat’, on a chair in a back room. (In 1999 Bagpuss came top of a BBC poll as the nation’s favourite children’s programme of all time.)

Although he and Oliver Postgate (who died in 2008) were equal partners, Peter was very much the unsung hero of the two. Oliver deservedly received much acclaim for devising, scripting and narrating their animation masterpieces, yet the characters would never have proved as appealing without Peter’s creative and imaginative input.

Was it an amicable working partnership?

‘Oh Oliver was lovely to work with. I had no problems with him at all. We always got on. I mean we had arguments from time to time, but we always respected each other’s point of view. And yet we were very different. Oliver was from a very intellectual family [his grandfather was the Labour politician George Lansbury, his father a journalist and writer]. They were a very literary family whereas mine were largely craftsmen. We had the complete works of Dickens and that was about it [it was Cruickshank’s Dickens illustrations that made Essex boy Peter want to be an illustrator]. But Oliver and

I just clicked, mainly because our tastes were so similar.’

One of the things they agreed on was the parlous state of children’s television in those early years. ‘We didn’t like television talking down to children, or making the characters look cute. We were against that whole idea of trying to find out what children liked. Oliver always had this thing where he didn’t care what children liked. He did what he felt was right and the children either had to like it or not.’

Of all their creations, Peter is most proud of Noggin the Nog. The story was inspired by the Norse chessmen in the British Museum. ‘I wrote the original saga, but it didn’t come to anything. Oliver had seen these chessmen and also thought they were fantastic little characters. He looked at what I’d written and said “Why don’t we try this for the BBC?”’ He added more characters, injected his own brand of wit, and the BBC commissioned it. ‘Between that and Ivor the Engine we were quite busy for some time. We did everything: annuals, books, comics – once you’ve got things on television it all takes off.’

Aside from his work with Oliver, Peter created Basil Brush, the subversive upper-class fox. Peter modelled Basil on the film star Terry-Thomas, even incorporating the distinctive gap between his two upper front teeth, and he made the first puppet using a real fox tail. Basil was voiced by Ivan Owen until Owen’s death in 2000. ‘Ivan was originally an actor, though not a very successful one. He had a rather neurotic and weird persona that was absolutely perfect for Basil. I was merely Basil’s dentist and tailor,’ he adds with a laugh.

After lunch at a nearby pub, Peter shows me round the large, rather chilly barn next to his farmhouse where all the Smallfilm productions were made. (‘Come on, dogs,’ he calls, ‘the Clangers are waiting!’) The place is an Aladdin’s cave of TV memorabilia and artistic endeavour: original Ivor the Engine illustrations here, a drawer full of Peter’s charming landscape and sailing prints there (a tall-ship enthusiast, he sailed across the Baltic in 2009). And perhaps the jewel in the crown: a box containing the original Clangers (famously knitted by Joan from vibrant pink wool). They are still sporting their groovy little 1969 waistcoats inspired by the ones Twiggy wore: ‘Joan sewed them on her new zigzag sewing machine.’

Peter stands Major Clanger, the Soup Dragon and the Iron Chicken (made from Meccano) on the same work table where they were filmed on Oliver’s single-frame camera all those years ago. His enthusiasm and affection for these small creatures is evident.

What does Peter make of the Clangers revival (52 episodes, due for transmission on CBeebies and the American kids channel Sprout in 2015)? Won’t its soul be lost without Postgate’s soft, melodic narration?

‘Yes, in a way that’s very true,’ agrees Peter. ‘But Dan [Oliver’s son, who is involved in the venture] is a very good writer himself. He’s also an illustrator...he’s done some very nice children’s books.’

They haven’t yet decided who will take Oliver’s place. People like Michael Palin and Bill Bailey have been suggested. Peter is not all that keen on Stephen Fry: ‘He’s too powerful...’

Despite his loyalty to the project, I detect faint bewilderment at the amount of time and expense that has gone into making it. ‘When you think it took us a few hundred to make an episode of The Clangers and if we wanted to introduce a new character, I’d spend a day or two making it from what I could find lying around in the barn...’ (which explains why the Spaceman who landed on the Clangers’ small rocky planet collected his rock samples in a wicker basket). ‘Whereas now they might say, well you can’t have that character because it will cost another five thousand. And then there are so many people to go through, experts, and what have you...’

Perhaps this accounts for the enduring appeal of The Clangers, Noggin the Nog and co. That these unique creations should spring from a rather bonkers English cottage industry in a converted cowshed in Kent is incredibly endearing in an age of big money and flashy production. Oliver and Peter made something from nothing, using their ingenuity, with not a focus group or committee in sight. Their stories may seem slow-paced by today’s standards, but it’s perhaps this very simplicity that proves so reassuring in a world where young children are increasingly bombarded with frenetic animation.

What does Peter think was the key to their success? He puts the Clangers back in their box and considers for a moment. ‘Well, Oliver and I kept on going, just coming up with new ideas. We did what pleased us.’

We leave the barn and return to the farmhouse, where Joan is waiting by the fireside with a fresh pot of coffee.