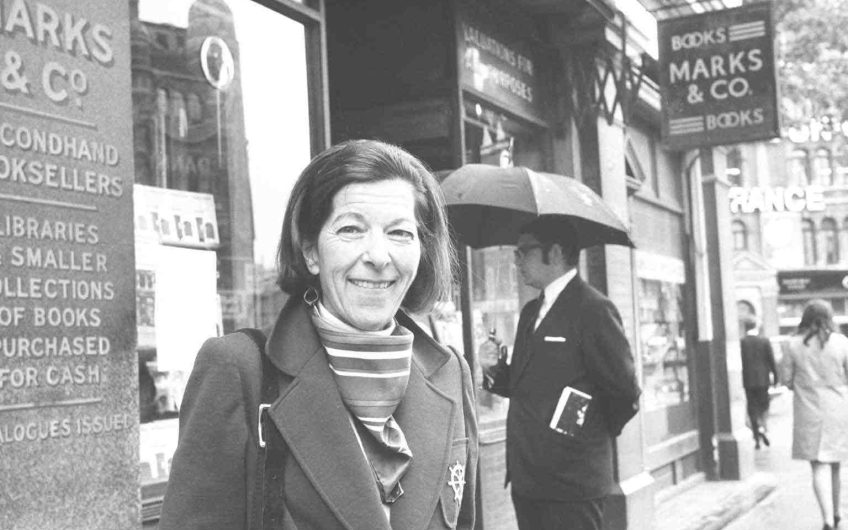 A New Yorker’s letters to a London bookshop were a big hit 50 years ago. Valerie Grove accompanied her on her first visit to Marks & Co

Just over fifty years ago, in 1971, I was the ‘bouncy girl reporter’ – as she described me – who accompanied Helene Hanff on her first visit to the antiquarian bookshop Marks & Co, at the address she was about to immortalise: 84 Charing Cross Road.

In her book of that title, published in America in 1970, she simply reproduced her exchange of letters with the shop, starting in1949. The anglophile Miss Hanff would pester Marks & Co for English classics, preferably slightly foxed.

She wrote as she spoke, in Jewish wise-cracking style. ‘Frankie,’ she would address the shop’s manager, Frank Doel, ‘it’s going to be a long cold winter AND I NEED READING MATTER – so GO FIND ME BOOKS!’

The reply from Doel, a family man from suburban Finchley, was formal. ‘Dear Madam: In reply to yours of the 5th October…’

‘I hope “madam” doesn’t mean over there what it does here,’ she retorted.

In her brownstone studio apartment in Brooklyn, she kept few books. As an autodidact she scorned people who never threw or gave away their collections.

‘People furnish their homes with shelves full of unread books,’ she said. ‘Otherwise how wouldja know they were educated, right? I can’t think of anything less sacrosanct than a bad book, or even a mediocre book.’

She preferred her books scribbled in – ‘comradely’ style – with notes in margins and inscriptions on flyleaves.

When her copy of Pepys’s diary arrived from Marks & Co, she found the previous owner was ‘a slob who never even cut the pages’.

She did the job with a pearl-handled fruit knife, one of a dozen she’d inherited.

‘Maybe I go with the wrong kind of people,’ she told Marks & Co, ‘but I’m just not likely to have 12 guests all sitting around simultaneously eating fruit.’

Her book has never been out of print. It became a TV play, a West End play and a 1987 film, in which Anthony Hopkins played Frank Doel and Anne Bancroft was Helene – looking nothing like the thin and spiky Ms Hanff, who usually wore a chic black trouser suit from Saks and a foulard tied in the Parisian style.

The day before the book’s British publication, in June 1971, I went by cab with Ms Hanff to Charing Cross Road. Number 84 was, as we had been warned, padlocked. Frank Doel had died from peritonitis in 1968, and the owners, Messrs Marks and Cohen, had sold the shop for redevelopment. It had closed six months before.

It was a poignant moment. Ms Hanff had so often promised Frank Doel she would come to London as soon as she could afford the trip. Peering through the letter box, we saw only dusty floorboards and piled-up mail. In the film, Bancroft arrives at the shop alone, sans bouncy companion, and steps inside, to wander misty-eyed through the stacks.

The real Helene was too busy blowing clouds of smoke from her Du Mauriers to be misty-eyed.

Ten years later, we were both back at the shop (a McDonald’s branch today) for the unveiling of a blue plaque.

‘Imagine it,’ she said. ‘That a plaque should go up on a London building, just because I wrote letters to it. And I never even went to college!’

Born in 1916 in Philadelphia, at 20 she landed in New York, to scrape a living by her typewriter: Ellery Queen TV scripts, New Yorker features and a book called Underfoot in Show Business.

She said she learned everything about English literature from Q – Sir Arthur Quiller-Couch in his volumes of Cambridge lectures.

‘You dizzy me,’ she wrote in 1951, ‘rushing Leigh Hunt over here whiz-bang like that. It’s hardly more than two years since I ordered them.’

To the staff of Marks & Co, still under rationing, Helene would send food packages – tinned meat, eggs, candy and nylons. Any friend of hers travelling in Europe would have to say hello to the shop at 84 Charing Cross Road and report back. ‘Dickensian,’ they told her.

The writer Leo Marks, son of the proprietor, said his father never read any of the books he sold ‘but he knew their value’.

On another of her London visits, she told me over lunch about the pilgrimages she’d made: to St Paul’s, where John Donne preached, and to Keats House in Hampstead.

I had a thought. She’d just watched Tinker Tailor Soldier Spy in America. ‘Would you like to see where John le Carré lives?’ I asked.

So I drove her to the circular enclave of Gainsborough Gardens in Hampstead. Outside number 9, I slowed down.

As we sat there, the front door opened and out stepped a tall, distinguished-looking man wrapping a scarf round his neck, with his dog on a lead. Startled, I accelerated away.

Each time her book was revived on radio or on stage, another avalanche of letters would arrive. ‘Everybahdy who reads the paperback writes me a letter,’ she told me. ‘So then I have to write back. The stamp costs me 30 cents. My royalty on the book is 11 cents. So I’m losing 19 cents every time!’

A farmer in Ohio proposed marriage. ‘Can you see me a farmer’s wife in Cowpats, Ohio?’

For six years in the 1980s, she produced a monthly Letter from New York for BBC Radio 4’s Woman’s Hour. There were essays about her neighbours, their dogs that had to be walked in Central Park, the rooftop gardens of Manhattan, the street parties organised on the slightest pretext, Christmas shopping at Lord & Taylor, cosmopolitan delis and off-Broadway theatres.

When André Deutsch threw a party for her at the Garrick, she was appalled to learn that the club favoured actors but barred all women. ‘Like any two-bit actor can get in, but not Judi Dench?’

Once she visited me at my north-London home and wrote about it in her next book, vastly impressed by unexceptional Victorian features such as tiled floors, fireplaces, stained-glass windows and the stumps where gaslights had been.

Then in 1995, when I was in New York, I called at her East 72nd Street brownstone garret. It was exactly as I had imagined.

Hardly had we sat down to chat than a knock came on her door. In breezed a chirpy young schoolteacher named Lynne M Brusco, from Florida, accompanying a gaggle of children on a school trip/pilgrimage to meet the author of their set book.

Sadly Helene died in 1997, aged 80. Much later, Miss Brusco sent me some photographs, writing, ‘Please know that you always have a home in Naples, Florida.’

The genius who shot The Deer Hunter - Charles Elton