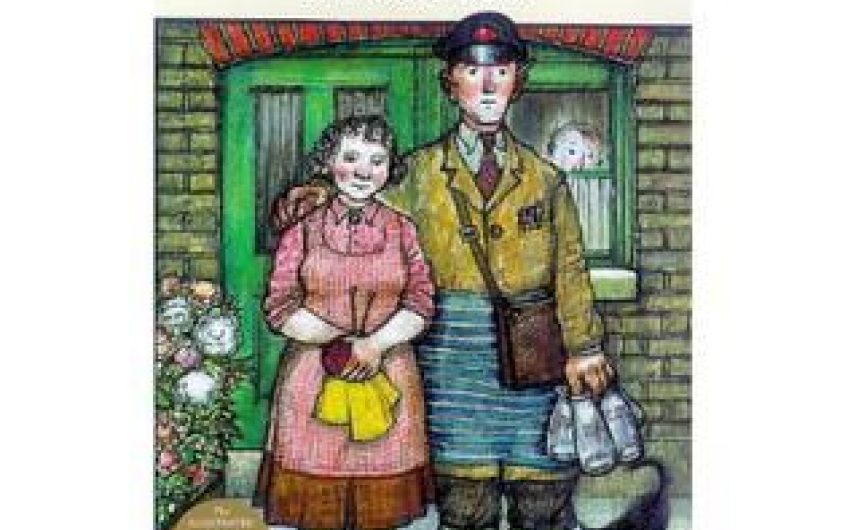 One of the many bugbears of oldie life is the loss of strength. Objects which you have been handling easily for years have become much heavier and more difficult to move.

Yesterday, I decided to have a tidy-up in the junk room. In it there is a decorator's folding table which is filled from end to end with files and boxes full of stuff about my Ethel & Ernest book – stuff which I had almost forgotten about.

Better look through it all, I thought. So I put a finger inside the corner of a red box-file, entitled ‘PERSONAL LETTERS’, to get things going.

Nearly snapped my finger off – it didn't move! Went to pick it up with one hand; couldn't possibly do it. Tried lifting it with two hands; just about managed it, but wouldn't like to carry it any distance. This is crazy, I thought. I'll weigh it. 8½ pounds!

So, a new way to record and compare fan mail? By weight, not by number? Have you weighed your fan mail lately?

In the same week I was given a superb book about Lucian Freud: ‘A Painter’s Progress – A Portrait of Lucian Freud’ by David Dawson. It’s a truly magnificent book, written by someone very close to Freud, but it weighs a ton; well, not quite, but heavy to pick up with one hand. For weedy me at any rate. It weighs just under five pounds.

This reminded me of the time in the life room at the Slade. We were all working away silently, when the door opened a few inches and Lucian Freud slipped in.

Immediately, he pressed his back against the wall, both hands with widespread fingers also pressed against the wall behind him. He looked very frightened. Slowly, he moved along the wall all round the room, saying nothing, until he came back to the same door which he opened and disappeared without a word.

So, what was that all about? Lucian playing a joke on a roomful of students? Most unlikely. He looked genuinely frightened.

In those days, most students did their work on the landings and in passage ways, which made it more informal. I was lucky enough to have two encounters with Freud in this way. He was a fascinating man. Entrancing is the only word for it. Yet when friends asked, ‘What did he say?’, I couldn't remember a thing.

Talking of not remembering, I had almost forgotten about my nearly broken finger. How could anyone forget that they had received 8½ pounds of personal letters on one subject? How many letters was that? Too many to count? I had certainly read them all, but couldn't have replied to even a fraction of them. Is it a colossal conceit to find it unremarkable?

But then there are occasional examples of increasing clumsiness. Came down this very morning to find a brand new, unopened box of tissues floating in the sink: ‘KLEENEX MANSIZE: CONFIDENTLY STRONG – COMFORTABLY SOFT’ – that's me, folks. All in bold black, gold and yellow. £1.99.

So, what now? Take tissues out and dry them off? Let the whole box dry as it is? Chuck it? It is now sitting on the front doorstep in the baking sun.

Still, the aged brain goes staggering on. I keep falling asleep writing this. Wake up to find pen in hand and a trail of ink all across the page. Why bother? If I find it so boring, what will the readers make of it?

Why Peter Finch was mad as hell

Farewell to the ideal retirement home. The care home, beloved by Diana Athill, has been sold