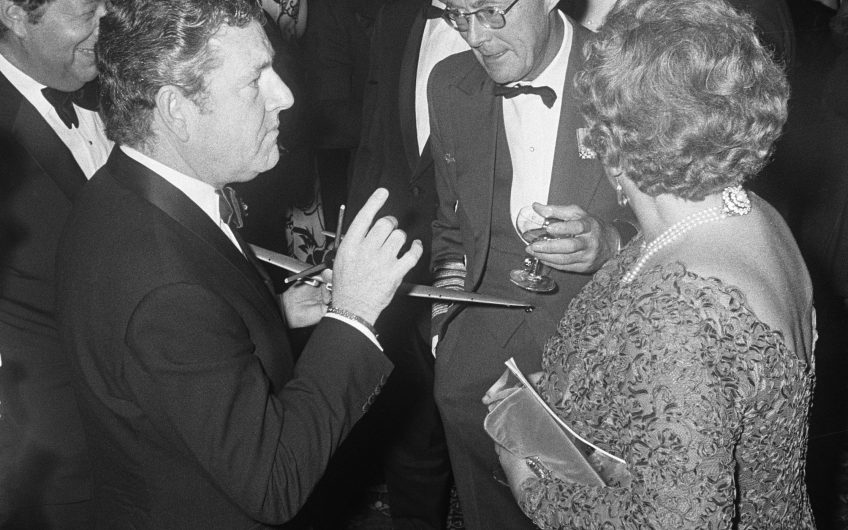 When I was growing up in the 1980s, television programming was filled with repeats of yesteryear. This gave me the opportunity to catch-up on a great deal of films my parents had first seen in their youth. One face that became very familiar in our household was actor Kenneth More (1914-1982).

I was first introduced to him by my father, one rainy Sunday afternoon when the British comedy classic, Genevieve (1953) was showing. His effortless charm, perfect comic timing and happy-go-lucky attitude caught me hook and line. From Doctor in the House (1954), The Admirable Crichton (1957), to Next to No Time (1958), he soon became a firm favourite of mine.

As I grew older, I continued to seek his films out. They took me from light-hearted escapism to serious, dramatic adventures. Films such as the immortal classic Reach for the Sky (the story of British ace pilot Douglas Bader, 1956), an excellent screen adaptation of John Buchan’s The 39 Steps (1959), the incredibly powerful retelling of the demise of the SS Titanic in A Night to Remember (1958), Northwest Frontier with Lauren Bacall (1959), and the legendary wartime mission to Sink the Bismarck! (1960).

No matter how thrilling the story, there was always such a genuine believability to the roles he inhabited. Kenny (as he preferred to be called) conveyed heroism and the classic British ‘stiff upper lip’ with such ease that every one of his performances grounded you in the reality of the situation, no matter what the genre. It’s not surprising that over the years his work would be rewarded with many accolades including a BAFTA, CBE, and a theatre named in his honour.

But what was he like behind the camera I wondered? Years later, I took to my research to find out more about the man who had dominated the British Golden Age of cinema during the 1950s, and the small screen into the 1970s with original television adaptations of the hugely popular The Forsyte Saga (1967) and Father Brown (1974).

I discovered three wonderful autobiographies (sadly now out of print): the aptly named Happy Go Lucky (1959), Kindly Leave the Stage (although more anecdotal than biographical, 1965), finally, and the most comprehensive, More or Less (1978). Each volume conveyed to the reader the maxim of living life to the full and never taking it too seriously.

My research continued with the beautifully written autobiography of Angela More, Swings and Roundabouts (1983). Actress, author and of course Kenny’s wife, who he lovingly called Shrimp. Beautifully written, it’s a deeply personal and candid journal which acts as an excellent companion piece to his memoirs.

Sadly, the internet was rather sparse…apart from IMDB and Wikipedia pages, and a few interview excerpts, there was very little presence here for a man who had given so much to his profession, and his audience.

It wasn’t just the digital world that I was struggling with. Mentioning his name in passing to friends and peers alike brought me equal dismay. Why had so many people forgotten him, or worse, had never heard of him? I was determined to go to bat for him to correct this.

Here lay the task of forming the only official website in tribute to my childhood hero – one of England’s greatest film stars. It would carry me on a journey discovering much more than I ever expected and ending with a close friendship.

My quest began by reaching out to Angela More through her agent to enquire whether it would be possible to send through questions about Kenny which she would be able to answer. Questions which could tell me what my childhood hero was really like. I wasn’t sure if I would be successful. A lot of time had passed since Kenny had died and Angela had now remarried to the British playwright Bill Bryden. I had practically moved on from the prospect when, out of the blue, came the first of many emails providing me with a treasure trove of answers.

Over time Angela thought it best to meet up to provide me further information. One sunny day in May 2018 we met in a quiet corner of a restaurant in Sloane Square. At first, I found her sceptical of my interest; ‘was this person for real, having only been born in 1978, only 4 years before Kenny’s passing?’ I soon put her mind at rest with my genuine enthusiasm. Over many cups of coffee, we talked and talked and talked. By the end of our time together we had already found a day to meet again. Angela wanted to show me items she had held on to from their relationship that helped tell their story together. Our meetings felt almost clandestine.

Each time we would see each other some rare gem would be presented to me from her handbag. I felt like a child in a candy store. I was being let into a world very few people had been given the privilege to enter, and as time passed, we soon became good friends. With each item I was shown I took copious notes, photographing everything. It wasn’t long before we talked about the ways we could get Kenny’s name ‘back out there’. The official website was born. Angela shared photographs and memories and introduced me to Kenny’s daughters; Sarah and Jane, both of whom were so generous with their time and memories. With photos of his personal items I went to work in creating a digital archive. From here I started reaching out further both to Kenny’s contemporaries and fans to share their stories of him. Now, finally on July 12th, 2019 we have a Kenneth More day on Talking Pictures TV. Another golden opportunity to spread his name far and wide.

It’s been over a year since Angela and I first met. We are still in constant contact often meeting and I am eternally grateful for all her help and generosity.

But what did I learn about him? He served on board two Royal Navy ships during World War II. He had a childlike quality in his zest for life and sense of fun. Impeccably mannered to those he met and incredibly generous with his time and his fortune. Loved dining at the Garrick Club, his cars, playing golf, and deep-sea diving. Hated injustice and always supported the underdog. He had great moral and physical courage, especially in his later years. Socially he was always up for a lark, the life and soul of the party. At home he was quiet and thoughtful. He was flawed like all of us. He made mistakes but always tried to learn from them. He was my hero, but he wasn’t perfect; no-one ever is.

Kenny believed the entertainment industry was a magical one, full of opportunity and promise. It’s not surprising I ended up working in it myself. I always wondered what it would have been like to have actually met him…Angela told me once: “He would have been thrilled with what you are doing, especially now after so much time has passed. To have him remembered, that’s all I’ve ever wanted.”

Whenever I need my spirits lifted, I often return to his films. He never fails to bring a smile to my face. Kenny left us far too early at the age of 67 from Muscular Atrophy disease, but at least we can step back in time through his film performances and imagine what it must have been like to have been in his company. Best of British is a phrase often bandied about, but none used so aptly when referring to Kenneth More.

Nick Pourgourides is the Founder of Kenneth More’s Official website, which can be viewed here.

Talking Pictures TV are dedicating a special day to Kenneth More on July 12, which also marks the anniversary of his passing.