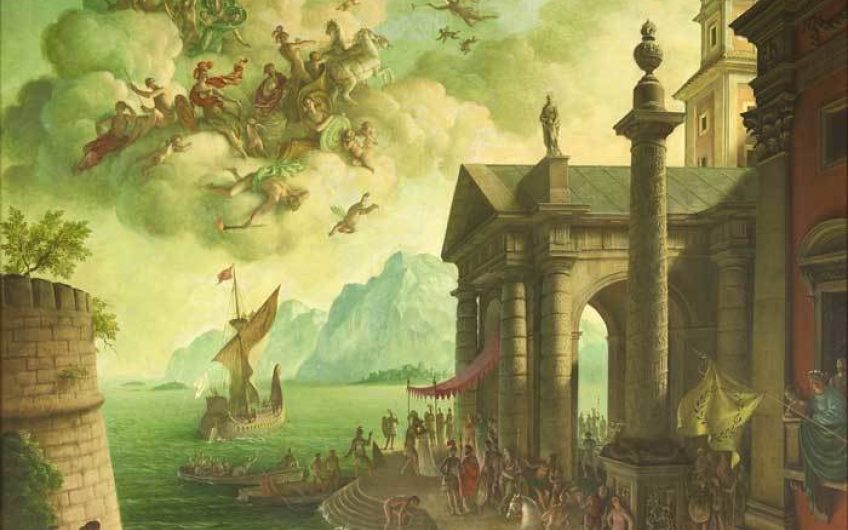 Ulysses’s Farewell. Whistler depicts himself (foreground, centre) as a naked madman, predicting the future with his cards
View Full Size
1
of 1

This astonishing picture by Rex Whistler – Ulysses’s Farewell to Penelope – was for decades referred to with the tag ‘whereabouts unknown’.

When my husband, Hugh Cecil, and I wrote our 2012 biography of the artist, we could not include it as we had no idea as to its location. It had disappeared into private ownership.

Suddenly from out of the blue – as blue as the sky in the picture – we received, recently, an email from the daughter of the owner, wondering whether we would we like to see this picture in her family’s possession.

Pausing only to feed the cat, I boarded a train to the west of England with my genial brother-in-law, photographer Angelo Hornak, and his weighty camera equipment – and soon there we were, standing before this ‘lost’ masterpiece by Rex Whistler.

This is every biographer’s dream. Ulysses’s Farewell is everything – and more than – we had hoped it would be from the black-and-white reproduction, which was all we had ever seen of it.

How the painting came to be with this family is straightforward; how Rex came to paint it and give it to its original owner is more mysterious. The owner is called Penelope. She saw the picture and loved it. In 1975, it was sold at auction for £2,500. So far, so transparent.

The catalogue entry for the sale read, ‘The property of Mrs Peter Hastings, from the collection of her father, Sir Malcolm Bullock, Bt.’

How did it come into the possession of the Conservative MP Sir Malcolm Bullock (1889-1966)? The story is told by Rex’s original biographer, his brother, the engraver Laurence Whistler (1912-2000), in The Laughter and the Urn, published in 1985 after years of research and conversations with friends and acquaintances of Rex. Among these was Malcolm Bullock.

According to Laurence, Bullock was ‘an older man met in [the politician] Philip Sassoon’s company, rich, worldly, cynical, notoriously homosexual…’ – everything Laurence was not – ‘and they were off to Paris together, to the fascination of Rex’s young friends.’

This was in 1931. Laurence describes this week-long trip – Rex’s first to the French capital – in some detail. His account is coloured by his evident dislike of the seemingly lascivious Bullock.

‘No claim is made that any carnality ensued,’ Laurence writes in the characteristically tortuous prose he

often adopted when describing Rex’s friendships and feelings. In other words, theirs was a platonic friendship.

Bullock, despite his obvious leanings, had been married and was widowed with a young daughter. Now he became very possessive: ‘He [Rex] grew weary of being monopolised, of the free seat for any [theatre] production, of the long dinner, tête-à-tête, when any friend could be demolished.’

Rex began an awkward process of breaking off their friendship, returning Bullock’s Christmas present of ‘a very expensive book’.

Eventually, says Laurence, ‘They got on to more acceptable terms and, later, Rex painted Bullock a large panel, a farewell of Ulysses to Penelope, a theme chosen for a personal reason not apparent to Bullock.’

The parting of the ways was engineered by Rex at the end of 1931 and the beginning of 1932; he gave the picture, signed, to Bullock the following year.

In 1932, Rex was only 27 and already a successful artist. He had made his triumphant debut at the Tate Gallery, with his first mural, while still at the Slade School of Art. As a result, he had been awarded an honorary bursary to the British School at Rome. He was captivated by the classical ruins, by the light and, especially, by Tivoli. All these inspirations are reflected in Ulysses’s Farewell.

The picture is reminiscent of Claude Lorrain, an artist Rex greatly admired; particularly Claude’s Seaport with the Embarkation of the Queen of Sheba, painted in 1648, which Rex would certainly have seen in the National Gallery in London. Ulysses’s Farewell echoes the composition of that

17th-century masterpiece, with elaborate architecture framing the main narrative either side, while the gleaming, rippling water draws the eye in and onwards to the sunlit far horizon.

In contrast to Claude’s discreet arrangement of classical figures, Rex has enjoyed himself, cramming his canvas with movement, on land and in the heavens. Here, on voluptuous

clouds, deities disport themselves, putti fly in every direction and the god of fire reaches earthwards with a flaming brand.

As well as humour, there is horror: in the foreground on the quay writhes an elongated, almost naked figure – ‘A madman, foretelling the future in a pack of cards, has the artist’s own grimacing features, hideously awry,’ as Laurence Whistler pointed out.

Alongside Rex’s evidently romantic sensibility was an unexpected love of horror. He would insert a grinning skull into a romantic landscape, and some of his caricatures verged on the horrendous.

He also would slip a subtle self-portrait into a composition, if the scale allowed (although none as gruesome as this). From 1933 to 1934, he painted a double portrait of the Dudley Ward sisters, Penelope and Angela, described by Laurence as ‘standing by a fountain into which water pours from a stone mask – a self-portrait of the artist with satyr horns’. On the right of the Ulysses canvas is a similar stone fountain with a grotesque face gushing forth. Might this, given the circumstances, be of Malcolm Bullock?

It was while painting the Dudley Ward sisters that Rex fell in love for the first time, with the enchanting Penelope Dudley Ward. She was young – only 19 – and nothing came of this infatuation. But she was the first of the many beautiful women with whom Rex would fall in love, and who fell in love with him – thus going a long way towards refuting his reputation as being homosexual.

But it must equally be said that his sexuality was always ambiguous. He loved women for their beauty and their company, but not necessarily for sexual relations.

There are many ways in which Ulysses’s Farewell prefigures Rex’s greatest work, the mural at Plas Newyyd on Anglesey he painted for the Marquess and Marchioness of Anglesey in 1936-38: his love of architecture; the elaborate vessels at sea; the light rippling on the waves; and the sense of a vast horizon disappearing over the mountain and the sea. In the Anglesey mural, too, he included a self-portrait: this time as a gardener, sweeping up scattered rose petals, signifying his love for the Angleseys’ daughter Lady Caroline Paget.

To this day, mystery surrounds the painting of Ulysses’s Farewell. Laurence Whistler states that it was a gift to Malcolm Bullock. Quite a gift.

It is possible that Bullock commissioned it, but that Rex gave it to him in order to avoid being paid by him, given the awkward circumstances of their friendship. It is large – four foot by five foot; close to the size of two over-door panels that Rex was to paint for a client in a London house. Bullock might well have asked him to paint an overmantel panel, for a specific space. That it was sold unframed at auction indicates that it was removed from its site.

So questions still cling to this picture, as they do to the artist himself. Most of all, the question as to what he might have achieved had he not been killed in action in the Second World War – by a mortar in Normandy 75 years ago, on 18th July 1944. He was 39.

His painting during the war, which he managed despite his rigorous four-year training in the Welsh Guards, shows an increasing depth and maturity. His portraits of his fellow soldiers are especially memorable, in particular The Master Cook (1941). This is in the collection of his regiment. The Welsh Guards are marking the 75th anniversary of his death by having their remarkable collection of Whistler’s paintings and drawings restored by distinguished conservationist Valentine Walsh. She says it is a challenge to restore them, as Rex used any material that came to hand: quite often bits of paper stuck together and then stuck on to a card. It is indeed an extraordinary collection, of which they are justifiably proud.

Sadly, the National Army Museum in Chelsea has not treated Rex’s work with the same consideration.

After his death, his family gave the National Army Museum Rex’s Self-Portrait in Welsh Guards Uniform, painted the day his uniform arrived, in May 1940. He is having a drink at a friend’s house in York Terrace, overlooking Regent’s Park. Perhaps the most memorable of all his portraits, it depicts Rex at the turning point when he exchanges his life as an artist for that of a soldier. At the museum, it is hung in an array of garishly coloured posters for films such as Zulu and Tunes of Glory. They completely overwhelm the thoughtful, introspective portrait of the artist-turned-soldier.

The director of the museum, Justin Maciejewski DSO, agrees that the presentation of the portrait is wrong. ‘We intend to put this right over the coming years,’ he tells me, ‘but it will take time.’

The hang is only part of the problem. The caption is in equally poor taste as well as being pretty useless. Instead of explaining who Rex actually was, his dates, or how this self-portrait has come to be here, it states only that he was the model for the painter Charles Ryder in Brideshead Revisited. This is not even proven, although the museum’s caption presents it as fact.

The only record we have of Evelyn Waugh on Rex is in a letter Waugh wrote to their mutual friend Lady Diana Cooper:

‘I barely knew Rex Whistler. How I love him for asking, “What has victory to do with it?” It was the question one longed to hear asked in the last years of the war and not hearing it made me morose. It is the theme of my own little trilogy.’ (Waugh refers to his Sword of Honour war trilogy, and not to Brideshead Revisited.)

Waugh wrote this years after the war; but it shows his contemporaries’ admiration for Rex. Waugh, Diana Cooper, Cecil Beaton… they all loved him for who he was. And they respected him for the brave decision he made in giving up his successful career and enlisting in order to fight the Nazi tyranny.

And, whatever the fraught personal circumstances in which Rex painted Ulysses’s Farewell to Penelope, with his sensational inclusion of himself as a madman, we owe Sir Malcolm Bullock, Bt, a great debt for its sparkling creation by the artist in his prime.

American shopping is trapped in the Stone Age

Lockdown knocked the stuffing out of me – Elinor Goodman

Smiley? No thanks, says Grumpy