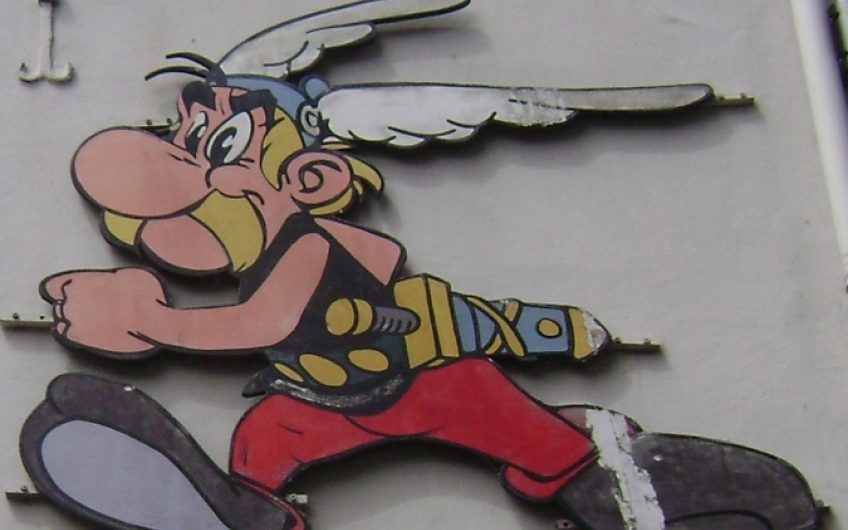 It's been announced that the 39th book in the series, Asterix and the Griffin, will appear in October. Giles Coren hails his hero, the plucky little Gaul

I made some very poor, very timid cultural choices as a child.

A bourgeois propensity to cleave to what was safest and least challenging led me to choose the lantern-jawed dorks of DC Comics (Superman, Batman) over the darker, more interesting Marvel guys (Spider-Man, Iron Man, Hulk); the woolly-jumpered chumminess of Multi-Coloured Swap Shop over the sex-and-custard-pies anarchy of Tiswas; the ocean-going squareness of Blue Peter over whatever the hell ITV’s Magpie thought it was, and so on.

And, as for choosing the cosy, unthreatening uselessness of Queens Park Rangers over, well, practically any other football team on earth, what a fool I was!

But as adults, we are the choices we made as children. They form our identities and we can never escape them. And I regret all of mine.

All? No, one small choice still holds out against the Roman invaders … because I was bang right to choose the Asterix books of Goscinny and Uderzo (who has sadly just died at 92) over Hergé’s miserable Tintin, about that meddling Belgian twerp with his Charlie Brown haircut and his talking dog and the pissed old sea captain and all those words – so many words; such convoluted plots; such dreary colours.

Asterix was much more cleverly conceived: a tight political satire of indomitable independent spirit versus clodhopping imperial power. They say it was about French resistance to the Nazis but we can read it any way we like – I have no doubt Boris Johnson would see himself as both Asterix, with his cunning, and Obelix, with his strength, pitted against the soulless bureaucratic might of Juncker’s Ancient Rome – with a vast geographical and temporal sweep, a huge and colourful cast of characters, dense with classical allusion and full of humour from the knockabout to the incredibly sophisticated.

Asterix was everything to me as a child: my sickbed solace (with hot lemon and honey and all 27 then-extant albums piled up beside me, to be reread in publication order); my bulwark against loneliness at boarding school; my route into literature, humour, language and the classics and my chosen specialised subject on Celebrity Mastermind (18 points, all correct and no passes, thank you very much).

And, to this day, I would place the little Gaul at one of the four corners of the English humour canon, the other three propped up by the only slightly lesser lights of Chaucer, Shakespeare and P G Wodehouse.

I’m talking about the English versions, of course, translated from René Goscinny’s French by the towering genius of the late Anthea Bell (Derek Hockridge has always been co-credited but the bulk of the work was Anthea’s).

The French books are rubbish. I speak the language fluently and have read them all. In the original, they are as dull as Racine, as unfunny as Molière, as drab and racist as Charlie Hebdo and about as gripping as a Michelin guide.

To be honest, they are better in Flemish, of which I have the complete set, as I do in German, Latin and Polish. Because when you know every frame of every book as well as I do, you can read and enjoy them in any language, and each tongue offers fresh joy to familiar jokes. Only last night, for example, I was up late with a mug of cocoa and Asteriks na Igrzyskach Olimpijskich.

But with Anthea’s rare genius – she is more celebrated for her editions of W G Sebald and Stefan Zweig, but her lasting contribution to the representation of foreign literature in English will always be Asterix – the books take on a new level of comic depth.

Yes, Shakespeare could do an illustrative comic name (one thinks of Mistress Quickly, of Bardolph, Pistol and Bottom), sure; Dickens had Pumblechook, Honeythunder, Pecksniff and Squeers. I will always reserve a titter for Gussie Fink-Nottle and Roderick Spode – but Anthea has given us Asterix’s English cousin Anticlimax, the Gaulish quisling Chief Whosemoralsarelastix, the athletic legionary Gluteus Maximus, the bumptious young architect Squareonthehypotenus, the Spanish chief Huevos y Bacon, the English chieftain Mykingdomforanos…

And if those are but simple puns, then relish the complexity of a scene in which Asterix, sneaking into a town-hall back office in Roman-occupied Condatum (Rennes) to enquire after the whereabouts of his kidnapped compatriot Tragicomix, is asked by a sanctimonious scribe, from high on his ladder atop a pile of carved marble tablets, ‘Is that Tragicomix with a “T” as in Timeo Danaos et dona ferentes?’

Truly, Sir Pelham himself could not have done better.

And so none will celebrate more vigorously than I the publication this month of Asterix and the Chieftain’s Daughter, even though it will be rubbish. Because a bad Asterix book, like a bad Woody Allen film or a bad cheeseburger, is always better than no Asterix book at all.

And it will be rubbish, I’m afraid. Because the stories have all been rubbish since Goscinny died, aged 51, in 1977.

Uderzo, the illustrator, now 92, struggled on alone for 40 years, drawing less well as he aged, tending to the Disneyish, and offering increasingly hackneyed plots dependent on deus-ex-machina outcomes, rank sexism and such incidental abominations as dragons and aliens from outer space – although Black Gold (1981) was a solid effort and Magic Carpet (1987) has a handful of frames to recommend it – and then in 2013 handed over to a new artist-and-writer team, Jean-Yves Ferrer and Didier Conrad, who started well enough with Asterix and the Picts but went rather backwards with Missing Scroll.

Artistically, they modelled themselves on late, cutesy Uderzo, which is a mistake, rather than on the glorious 1960s golden age of Normans, Cleopatra and Britain.

At the time of writing, Asterix and the Chieftain’s Daughter is still under strict embargo (the security situation is like Harry Potter squared), but a sighting of Chief Vercingetorix on the cover of Paris Match last month makes it very clear to me that the daughter of the defeated Gaulish chief who laid his arms at the feet of Caesar at Alesia (or directly on them, as the very first frame of the very first book had it, back in 1959, leading to a mighty ‘Ouch!’ from old Julius) will be either threatened or kidnapped by the Romans, and Asterix and Obelix will have either to protect her or to rescue her and then return her to safety, as with little Pepe in Asterix in Spain, Chief Boneywasawarriorwayayix in Corsica, the baby boy Caesarion in Asterix and Son, Tragicomix in Legionary, Quaestor Vexatius Sinusitis in Switzerland…

Along the way, Obelix will fall unsuitably in love with her, fall out with Asterix over it, they will be reunited, there will be a banquet, Cacofonix will offer to sing and the blacksmith Fulliautomatix will hammer him into the ground.

And we will dance and sing and celebrate with them. Not for the same reason as our friends across the Mare Britannicum, who, because Asterix first appeared in French in 1959, seem to think this year is his 60th anniversary, but rather because, Asterix the Gaul having been published in English for the first time by the Brockhampton Press in 1969, we know it is really his 50th.

Asterix and the Chieftain’s Daughter is out now

How scary is it flying on a plane in COVID times?

How Germany made the Germans