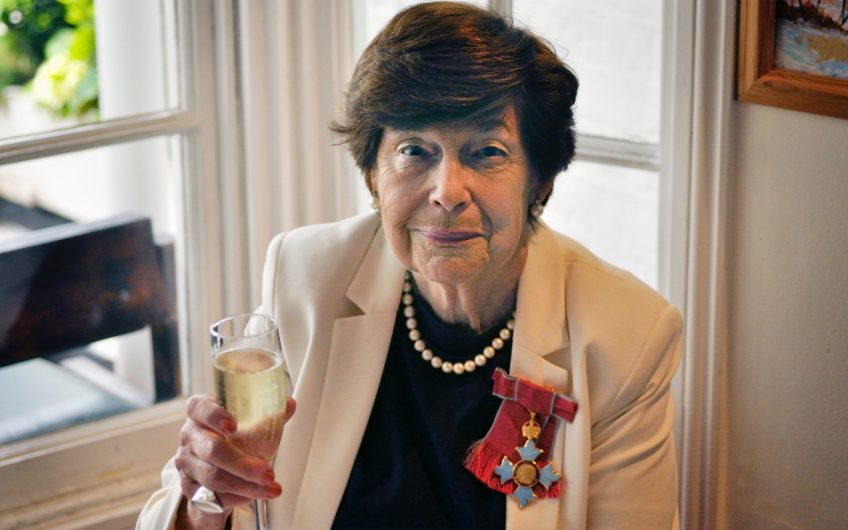 The great writer had all the attributes of the ideal journalist - curiosity, empathy, kindness and wit, says her friend Charlotte Metcalf

The inimitable Katharine Whitehorn, who died aged 92 on 8th January, was stitched into the fabric of my life.

I grew up knowing her as a great friend and support to my mother and after my mother died, she became the same to me. She and her husband, the spy fiction novelist Gavin Lyall, were generous and frequent hosts. I was made to feel ever welcome, as were any friends I dragged along, to their home in Chalk Farm and to their writers’ retreat of a country cottage. ‘The more the merrier,’ was the prevailing attitude. ‘Come!’

Fairly recently, Kath’s early columns and book Cooking in a Bedsitter were turned into a Radio Four series and earned her new fans. The recipes (quite a lot of tinned corn beef going on) might have been dated but the principle was not. Her casual, relaxed attitude to cooking and ingredients has prevailed, and, in many ways, was the precursor for the slapdash, ‘dish-dosh’ approach of Jamie Oliver and many more.

It’s partly what made her dinner parties such fun. There was zero fuss; no dashing off to the kitchen to perfect some complex foaming roux. Instead, Kath would dispense generous drinks and throw herself into whatever debate was going on before ushering us into the dining room, separated from the kitchen only by some small saloon-style swing doors (ever pinned back). Her early adoption of keeping everything open-plan, ensured Kath never missed out on the conversation. And dinner was invariably delicious, though she wouldn’t have cared had it not been – the point was the company.

Kath’s numerous achievements, including being awarded a CBE and penning one of the longest standing columns ever (her Observer column ran for 33 years and then for another six between 2011 and 2017), are well-known and her rich, throaty voice was instantly recognisable. Yet she waved aside her own enormous contribution to journalism with astonishing modesty. When I was Travel Editor at The Spectator, I commissioned her to write a piece for me and she wrote me a letter thanking me profusely, as if I alone had recognised her talents and was doing her a favour by employing such an elderly writer – ‘past it’ were the words she used. Needless to say, the piece was excellent.

She was kind, loving and very good fun indeed and was excellent at dispensing nonsensical, valuable advice, particularly on child-rearing. My mother could be defensive about Kath’s ‘Slummy Mummy’ edicts, but Kath’s less perfectionist, laissez faire approach reassured me hugely when I confessed to her my own feelings of failure as a mother. It also enabled her to achieve the warm, close relationship she had with her own sons Bernard and Jake. Jake has lived abroad for many years, but Bernard remains my dear friend and I witnessed the pleasure he and Kath took in each other’s company.

Indeed, when Kath was diagnosed with dementia, Bernard was vociferous about the need for a fresh approach to the illness. People might view as tragic that such a fine, incisive mind could appear fuddled, but Bernard insisted Kath should not elicit pity because fundamentally she was happy. Indeed, when I visited Kath’s nursing home with Bernard, she sat surrounded by flowers, twinkling and chatting away. Though entirely incoherent to me and mostly to Bernard too, she was clearly taking delight in our presence and I was therefore not depressed by the radical change in her.

Kath never pretended to be happy when she was not – she was admirably honest about her grief when her beloved Gavin died – but she had an unusually large appetite and capacity for joy. One of my favourite memories of her is on a cold day on the Thames. She’d invited me for a day out on the small boat she shared with Gavin. Gavin was at the helm when Kath went below deck to put ‘a couple of sausage rolls’ into the little stove they had. She then burst back onto deck waving a bottle of wine and a corkscrew and shouting, ‘Hurrah!’. Pouring wine into tumblers, she announced that Gavin was there to steer, so we should ignore him and concentrate on having a ‘bloody good time’. And we did, roaring with laughter as we cruised gently along between Oxfordshire meadows. And Gavin masked his amusement by taking to his designated role as grumpy captain with aplomb.

Child or octogenarian, Kath was interested in you. She knew exactly how to cut through etiquette and social boundaries to the heart of things. She made you feel good about yourself. She always stressed people’s achievements, however small, rather than their failings – and this was not confined merely to her adored grandchildren and children. She often talked about the small triumphs of colleagues, friends or children I’d never met. But instead of being bored, I was carried along by her enthusiasm, humour and obvious knack for storytelling. Besides, I knew my time would come and I’d soon be basking in her warmth and encouragement too. She boosted me. She often told me I ought to go into politics, which flattered me no end.

But it wasn’t really the flattery that I sought – it was the way she asked thoughtful questions, listened attentively to the answers and genuinely cared. And she never made me feel she was mentoring me (though she did) because she was generously prepared to lay herself open too. I see now these are the requisites of a true and lifelong friendship.

She enhanced my life no end and I will miss her enormously.

The joy of audio guides