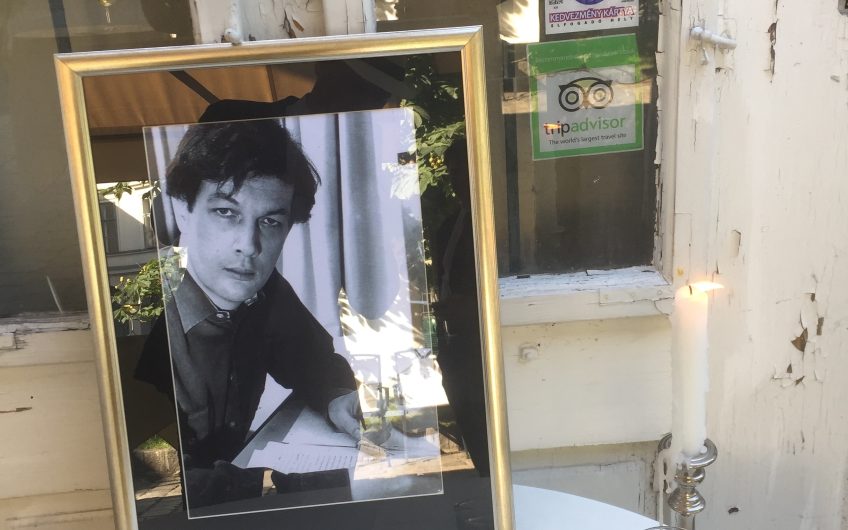 A picture of Norman Stone at his Budapest wake. Credit: Harry Mount
View Full Size
1
of 1

One of the many revelations of the service was that Norman was a devoted churchman, regularly attending Anglican services: in Turkey where he lived for nearly 20 years, and in Budapest. Another revelation was sitting in the front row - Viktor Orbán, Hungary’s controversial Right-wing Prime Minister.

Norman’s critics - and there are many - would pounce on this as evidence of his own supposed unforgivable politics. I think the more striking thing is that Orbán, like so many of the congregation there, was a former student of Norman’s. He’d been taught by him at Oxford in the late 80s before the end of Communism in Hungary.

Norman told me, with his customary modesty, when I saw him last month in Budapest, ‘I didn’t teach him much. Somebody told me there was this bright young Hungarian - so I went and talked to him a bit in Gee’s [a restaurant in north Oxford].’

That was how Norman taught - not in formal tutorials, but often in restaurants and pubs. When I was at Oxford in the early 90s, I wasn’t ever strictly taught by him. But I played Bridge with him and two other undergraduates - and I learnt much more from him that I did in conventional tutorials.

Norman’s been attacked by fellow Oxford and Cambridge dons for not taking his academic job seriously enough. But how many other academics in their 50s (as Norman then was) would give up their evenings to three callow undergraduates? None that I ever came across.

In an undergraduate room in St John’s College, Norman would stick on a tape of Russian military marching tunes and sing along to them in fluent Russian. He’d knock back our ropy Bulgarian wine, and teach us about the First World War and the Yugoslav Wars, then raging, while at the same time giving us juicy nuggets about Murdoch and Thatcher. He’d worked for both of them, causing many dons and undergraduates to clutch their pearls in horrified disgust. And, all the while, he would win hand after hand of Bridge, memorising every card in his planet-sized brain.

He wasn’t trying to be down with the kids. We all knew that he was in a higher position than us - not just within the university, of course, but also in brain dimensions. He’d often say, when I said something stupid, ‘You only say that because you know nothing.’ And he was right - I did know nothing; I learnt lots more by listening to him.

Before the funeral, Annabel Barber (author of the Blue Guide to Budapest, who co-wrote an article with Norman about the city in The Oldie earlier this year) said she’d once nervously asked Norman about his theories of history.

‘I don’t have any theories,’ he said. ‘I just know stories.’

That was the nub of his brilliant historical mind. He saw history as a collection of individuals - often making terrible mistakes; often doing extraordinary and funny things - not as impersonal clashes between Marxism and capitalism, say.

That also meant that his history was studded with wonderful little anecdotes that reveal much more of the truth of what happened than bloodless piles of theory upon theory. In his 2007 book, ‘World War I: A Short History’, he wrote that, in 1914, the Russians were so desperate to win that the Tsar licked his own stamps. The masses foreswore vodka, unless foreigners were present. ‘By November 1914, foreigners were much in demand,’ said Norman - a classic Stone punchline, delivered at the end of a paragraph.

Last month, I asked him about his latest book, ‘Hungary - A Short History’, and its reference to Elena Ceausescu, the wife of the Romanian dictator. Her last words to the firing squad executing her were, ‘How can you do this to an honorary doctor of Imperial College, London?’

The Daily Telegraph’s former political cartoonist, Nick Garland, once said of his old friend, Peter Cook, ‘He was like a bottomless well of humour. He didn’t have to be try to be funny or run through a stock of anecdotes. He was just funny, brimming with it.’

Norman was the same - his humour wasn’t a series of planned jokes; it was instinctive and brilliant, richly animated by rubber-faced contortions denoting mirth, ridicule and shock. And the same went for his intelligence - a deep well, forever topped up with constant reading.

You would have thought that such a mind would find other minds - particularly empty undergraduate minds - a little slow. Not a bit of it. Because he was gentle and kind - and interested in people, in the way his history was, too - he loved company. And as the journalist John O’Sullivan said at yesterday’s funeral, he was devoted to what Arnold Bennett called ’The great cause of cheering us all up.’

Another speaker yesterday, Professor Sean McMeekin of Bard College, said Norman ‘recruited me to a more interesting life’. Me too. It’s like that old line about a good tennis-player making you play better tennis - Norman raised your game.

He got into trouble with po-faced universities - their authorities, their dons and their undergraduates - because, as John O’Sullivan said yesterday, his hatred for cant and hypocrisy was such that he couldn’t help telling the truth: whether it was about the disaster of Communism in the Eastern Bloc, how little he was paid by Oxford, or how insipid a lot of the undergraduates were - ‘weeds’, as he liked to call the weaker ones.

John O’Sullivan told a story of Norman going on holiday in Bosnia in 1991 - because, Norman said, ‘I want to go before it's torn apart by carnage next year.’ No one believed him. He was spot on.

He was so often right because he knew so much. He knew central Europe because he’d spent a lot of the 1960s there. In 1964, as he wrote in his new book on Hungary, he got involved in a crazy enterprise to smuggle someone’s girlfriend out to Austria via Slovakia. He was caught and spent three months in prison - ‘I shared the cell with a Transylvanian gypsy who did wonders for my Hungarian.’

At the funeral, John O’Sullivan recounted the story of Annabel Barber asking Norman why he had embarked on this madcap, selfless adventure. ‘Because I’ve never been able to say no to a woman in a fur coat.’

Norman had liked his time at Cambridge - even though, as he said, 'When I went up to Caius in November 1958, I was a know-all Scottish blob.’ His time as Professor of Modern History at Oxford wasn’t such fun because of the provincial nature of the university then. And so - Britain’s loss; Turkey’s gain - he went to Bilkent University and then on to Budapest. It was striking, looking at the wreaths at the funeral yesterday, that Bilkent sent a wreath; so did the Turkish Ambassador to Hungary, who spoke warmly of Norman at the funeral; and so did Viktor Orbán. But there was nothing, as far as I could see, from Oxford or Cambridge.

When I saw Norman last month in Budapest, he wasn’t in the best of health. But he certainly didn’t look like dying only six weeks later, aged 78. And he was as funny as ever, as I knocked back his apricot slivovitz in his charming Edwardian baroque flat in a pink blancmange of a vast mansion block in the centre of Budapest. He barely touched the drink that evening.

He had a marvellous set of asides. When he said something shocking, he added, a beat later, the words, 'Tee hee.'

He was honest, too, in his criticism. When I saw him, I’d just written an article in the Spectator about how we all use servants nowadays - through things like Amazon, Uber and Deliveroo. He said of the article, 'I thought it a bit complacent.’ He said it with self-mockery and friendliness to take the edge off but he was right.

At one controversial moment in Norman’s Oxford Professorship, Ted Heath said of him, 'Many parents of Oxford students must be both horrified and disgusted that the higher education of our children should rest in the hands of such a man.’

I can’t speak for my parents but I am impossibly grateful to have been educated by Norman Stone.

The Kings and I

Boris's media village – in the boiling cauldron of Westminster