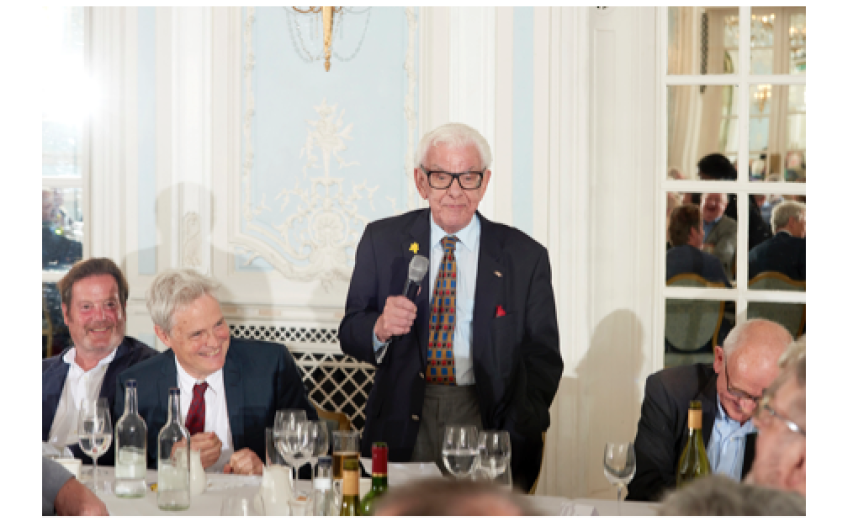 Once again, our Literary Lunch was relocated: rather than Simpson’s-in-the-Strand, we were welcomed to the fabulous Lancaster Ballroom & Parlour Rooms of the Savoy, modelled on an 18th century Parisian salon and designed by René Sergent.

Henry Marsh kicked off the proceedings. The neurosurgeon spoke about Jeremy Hunt, the Health Secretary, who subjected him to a charm offensive last week – Marsh was nearly won over. He also addressed, with good-humour, his past critiques of David Cameron and revealed how he had just been unexpectedly sacked from St George’s Hospital in Tooting. The speech reached a poignant climax as he spoke of the fallibility of doctors, the importance of acknowledging that fallibility, as a means to ensure the honesty of the profession, and of the limitations of our mortality. He quoted Mark Twain on the inevitability of death and taxes – and added, ‘You can’t have less of one without more of the other.’

Up next was Paula Byrne. Byrne spoke of Kathleen ‘Kick’ Kennedy, sister of JFK and Bobby Kennedy. Byrne talked about Kick’s surprising friendship with the bullish Evelyn Waugh, who asked her, on their first meeting, how big her ‘dot’ was. She thought he meant her belly button, and said it was normal-sized. In fact, he meant ‘dot’, as in the French for dowry. Byrne talked movingly, too, about the wartime death of Kick’s husband, the Marquess of Hartington, and her own tragic, early demise.

Last up was John Preston, with a brilliantly funny talk about his book on the Jeremy Thorpe affair. Subjects covered included: Thorpe’s Freudian interest in his mother’s bedroom during the act of love; the failure of his would-be assassin to differentiate between Dunstable and Barnstaple; and Lord Arran’s helpful explanation of why his Lords Bill relating to badger protection failed to become law, while his Sexual Offences Act of 1967, legalising homosexuality, did. ‘There are no badgers in the House of Lords,’ he said.

As ever, our host, Barry Cryer, was in fine form, maintaining the sacred ritual that is ‘the parrot gag’. He recalled, too, how moved he was at the late Bruce Forsyth’s recent funeral.

We are very much looking forward to returning to newly refurbished Simpson’s-in-the-Strand for our next literary lunch – and are very grateful to the Savoy for their wonderful hospitality.

What do you give the woman who has everything?