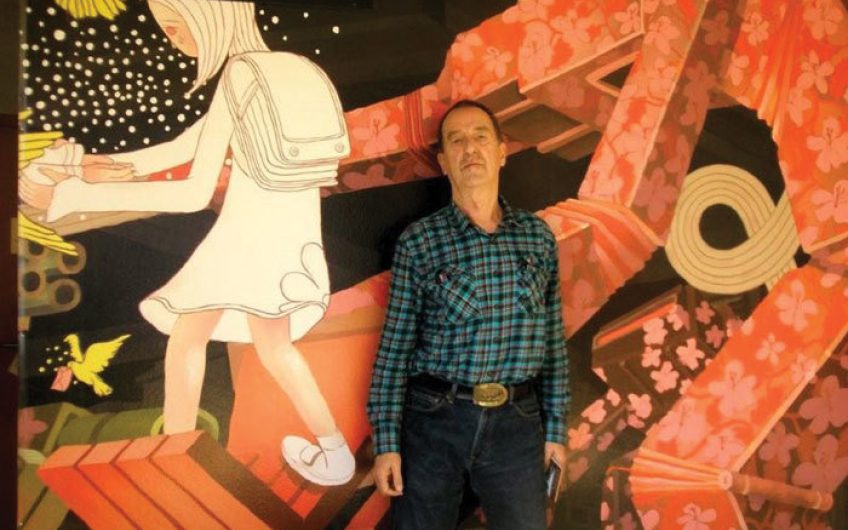 It’s easy to walk down Haight Street and say it ain’t what it used to be – nowadays most see Haight Ashbury as a tourist trap. So is it a travesty, or is there a legacy from 1967’s Summer of Love?

I join a Flower Power tour led by a man called Stan Flouride. He means Fluoride, of course, but has spelt it wrong. I meet the burly Mr Flouride at the hippie epicentre, the corner of Haight and Ashbury. It’s a damp grey winter’s afternoon. Stan is wearing shorts and has a Venezuelan goddess tattooed down his leg. He hadn’t been a hippie, arriving in San Francisco in 1982 as a radical punk. ‘You only get two youth movements in your life,’ says Stan. ‘I’d been a freak, never a hippie, then became a radical punk.’ ‘Hippies’ was a jazzer’s putdown of the white teenagers who hung around the cool dudes, the hipsters.

Perched unsteadily on the edge of America and mushrooming from nothing in the gold rush 150 years ago, San Francisco has always been a place where anything goes. Stan tells the stories behind the murals and graffiti, the clothes emporiums and the wacky smoke shops like Positively Haight Street and Dreams of Kathmandu. But the tour covers the whole history of the area, not just the barmy days of ’67.

We stroll the gentrified hills past the manicured Victorian wooden houses with their high stoop steps and intricate ornamentation. The big corner houses were mansions for wealthy families. Others were from catalogues for the new middle classes, personalised with curlicues and cornices.

The Haight itself began as a tourist trap beside the man-made Golden Gate Park, every tree and blade of grass landscaped into barren sand. There is still a garden for the blind with touch’n’sniff flowers. Hippie approved.

From Haight we climbed the steep sidewalks of Ashbury for some alternative stargazing. On the first block is the home of Janis Joplin at 635. A block further up the hill, 710 Ashbury, beautifully preserved, was home to the Grateful Dead. Stan shows us the Haight district firemen’s badge which still carries the Grateful Dead skull crossed by its lightning flash.

Right opposite is the Hell’s Angels’ house at 719. Stan explained the unlikely connection. ‘Lack of rolling papers,’ said Flouride ‘makes strange bedfellows.’ When one Angel was busted on $20,000 bail, the Dead did an impromptu benefit gig on the back of a truck and made that in an hour. The baffling bond between the peacenik hippies and the psychotically violent Angels was sealed. It was buried two years later at the Stones’ Altamont fiasco.

In contrast to the Dead’s gorgeous Victorian, Charles Manson’s house at 636 Cole is a sickly cream stucco. It has been exorcised a hundred times but with drawn curtains still looks murderously sinister.

Flouride stops in front of the house where Margot Fonteyn and Rudolph Nureyev were at a ‘marijuana party’. It was raided, and when the cops came Margot hid in a closet while Rudy flew over the roof. Stan points at the chimney where he was caught. Even handcuffed he did a jetée into the paddy wagon.

Murals are protected like listed buildings with a $10,000 fine. A long rainbow wall, the Evolutionary Rainbow, is filled with primeval one-celled organisms morphing through humans into chaos and destruction.

We’re standing on Haight opposite Magnolia’s, a café with a colourful history. It was a pharmacy when Hippies took it over and made it the Drug Store Café. The authorities said they weren’t a pharmacy and couldn’t say ‘Drug’ so it became the ‘Drog Store’. It changed hands and became Magnolia Thunderpussy, named after the new owner, a burlesque performer. Stan shows us the menu with erotic desserts like the Montana Banana. It was born again as the Christian ‘Psalms Café’ and then became ‘Dish’ with gossipy gay owners. It has reverted to ‘Magnolia’s’ – sadly not the more Dadaist ‘Drog Store’.

As we muse on Magnolia’s history a woman runs up. ‘Are you Stan? You gave me headlights for my ’67 VW and I want to give you honey from my rooftop.’ Honey from my rooftop! VW headlights! Holy Armistead Maupin! Timewarp gold dust! Is this the 21st century? I pinched myself. Stan had found the headlights on the street, asked around if someone had a matching model and finally found our grateful rooftop beekeeper. Who says hippie died?

What else endures from those heady days? Stan fills us in. The first non-profit community car share scheme (www.citycarshare.org) started here in 2001, an idea spreading round the world. Trees on the streets are planted by a group of ex-hippies called ‘Urban Forest’. Originally working clandestinely, cutting out paving stones and planting small trees, today they have full approval of the City Council, and still plant and maintain the trees for nothing. Every autumn a massive free country and bluegrass festival

(www.hardlystrictlybluegrass.com) rocks Golden Gate Park – hippie hillbilly heaven. Even the original Haight Free Clinic still cocks a snook at the rapacious American medical establishment and has the most successful detox clinic in the country.

Buena Vista Park, sprouting out of the Haight, is a good hill to climb for panoramic views across the city to the Golden Gate and to see where hippie was ceremonially buried in 1967. We finish up at the Herb’n’Inn’ (the ‘H’ is silent, geddit?) a cosy Victorian B&B with a psychedelic museum. Fired up by Flouride, I search for imprints of hippie legacy in other San Fran hotels, and find three which are indebted to the Sixties.

Located in the rising South of Market area, The Good Hotel uses sustainable materials. The bed is salvaged wood, the blanket is recycled soda bottles, the sink water is recycled into the toilets. They supply free bikes and encourage walking. They add a dollar to the daily bill for their local community project. All this sounds worthy but it’s presented playfully in chic minimalist rooms: ‘Be good’ declares a wall artfully. ‘Lights out and good night’ glows luminous over the bed.

Hotel Tomo is full of bright brash Japanese animé. One wall of my room was a huge manga cartoon. It’s hip and modern, with LCD TV, iPod dock and ironic wood-grain pattern carpet. It’s near the legendary Fillmore and a clutch of jazz clubs. It sits by Japantown, a bizarre Sixties Nippon mall packed with shops and restaurants built in 1968, and was recently voted ‘Best San Francisco hotel to have sex in’.

The Phoenix is smack in the centre of the urban jungle beside the notorious Tenderloin area. A sleazy old Fifties motel converted into a rock’n’roll resort, its tropical-styled rooms surround palm trees and a guitar-playing ceramic frog beside the pool. Its community projects include a fund for deafened rock musicians as well as a school. Celebrities who have stayed there include Little Richard, Chubby Checker, Red Hot Chili Peppers, Nirvana, Bo Diddley, and The Killers. The decayed urban jungle outside is being annexed by Vietnam and rebranded ‘Little Saigon’, and there are great Vietnamese restaurants on Larkin.

Something happened in 1967’s Summer of Love which lives on. Hotels fund community projects, folks give away VW headlights, a world-class country music festival is free and trees are planted for nothing. And though Schwarzenegger failed to push through pot’s legalisation last year, there is a marijuana ‘clinic’ on every corner.