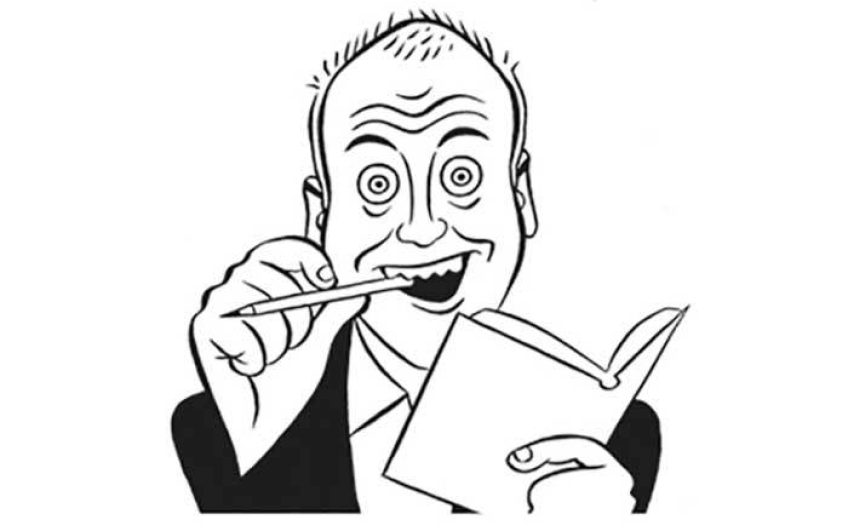 I have been sitting by the telephone waiting for the people from Love Island to call, but, so far, nothing. Not a peep. It can’t be that I’m not buff. I think it’s my vocabulary.

To be a Love Island star you’ve not simply got to be gorgeous to look at: you also need a certain way with words - like “like” has got to be on the tip of your tongue every time you say anything, like. A few weeks ago on Love Island, luscious Amy was being a tad critical of marvellous Molly. Said Amy: “Molly was like ‘oh he’s my type’ and I’m like ‘no, sorry, you’ve already got two’. It’s like three out of seven boys.”

Like it or not, ‘like’ has become to the lazy linguistic filler of our times. It’s not the only one, of course. There’s ‘um’ and ‘er’ and ‘I mean’, as well: sounds, words and phrases that serve no useful purpose, get in the way of what you want to say, and can be very, very irritating.

Listening to the Today programme on BBC Radio 4 not long ago, every one of eight consecutive interviewees began their first answer with either the word ‘Well’ or the word ‘So’. It’s so annoying – and, well, unnecessary. I didn’t watch last night’s Channel 4 ‘debate’ between some of the Conservative leadership candidates (I was working - someone’s got to), but I understand the delightful Rory Stewart irritated some viewers with his overuse of the word ‘So…’ at the start of his answers.

I am currently watching a bit more TV than usual because I’m taking part in the C4 series, Celebrity Gogglebox. I’m loving it because I’m doing it with my friend Sheila Hancock, who is highly intelligent, very funny and just the best company. Together we are watching programmes we wouldn’t normally watch. (I’m now hooked on Naked Attraction.) One of the things we are both marvelling at is the profusion of bad language on TV in 2019. Never mind ‘like’ and ‘so’: every other word seems to be ‘fuck’. (Go to Catch-up and catch up with last Friday’s Celebrity Gogglebox and you’ll even hear Sheila talking about ‘cocks’!)

In my book, bad language includes not only the traditional swear words, but also the words we use all the time, but don’t need to – like ‘like’ and ‘I mean’ between every other word, and ‘well’ and ‘so’ at the start of every sentence, as well as ‘fucking’ as a relentless adjective - eg ‘fucking brilliant, mate!’. I am also tired of the fashionable words that, while useful when apposite, have become debased through overuse: ‘iconic’, ‘nuanced’, ‘stakeholders’, ‘authentic’, and ‘passionate’ are five of my particular bugbears. These days, maintaining the current ‘discourse’ (another horror) appears impossible without them.

Different over-used words and phrases annoy different people. On the Channel 4 words-and-number game Countdown, contestants have to ask one of the presenters, Rachel Riley, to select their letters and numbers for them. Before the recording the contestants are given written guidance which states: ‘When requesting letters or numbers from Rachel please avoid using the expression “Can I get” as it generates a large number of complaints from viewers.’ Of course, it does. It drives them mad. It drives me mad. My children do it in restaurants. ‘Can I get the chorizo?’ they say. I suppose they could go out to the kitchen to get it, but that’s generally not the way the system works. ‘Can I have?’ or ‘May I have?’ is correct. ‘Can I get?’ is wrong, wrong, WRONG.

To get you going, here is my catalogue of the most annoying words and turns of phrase in current usage. These are mine. Basically (yes, that’s another one), I’ve had enough of them. (You’ll have your own: feel free to share them with me on Twitter. I’m @GylesB1. I think, too, we ought to have a discussion about all this on the wordy podcast I do with my friend, lexicographer Susie Dent. It’s called Something Rhymes With Purple.)

Okay, here goes with my pet hates. I’ve listed them in no particular order - and allowed myself a brief comment after each one in italic, like.

Have a nice day

You said that without thinking, didn’t you?

Do you know what?

Back in the day

What’s wrong with ‘From now on’ or ‘In future’?

Tick all the boxes

Who else is there?

I have to say

Cook down / Boil off

I think you mean ‘Before’

Comfortable in their own skins

Who else’s skins were they going to be in?

Stop! It was fun to start with: now it’s just another overused cliché

I think the word is ‘crazy’

You fill them in, don’t you?

Are humans really ‘resources’? What was wrong with ‘personnel’?

Now I really want to

I’m about to muddy the waters

To be absolutely honest with you

I don’t believe you!

As opposed to ‘backward planning’?

Step up to the plate

What’s all that about?

I think you mean ‘planned’

Do you miss ‘resist’?

What’s wrong with ‘include’?

What’s wrong with ‘the start’?

We don’t need that ‘of’, thank you

Are you all right there?

We need to call them out

What exactly do you mean?

Warning: I’m about to be offensive

But you’re never going to see me again

The word is ‘Speciality’

It is what it is

With all due respect

I have none for you, that’s a given

I think you mean ‘Regardless’, but perhaps you mean ‘Irrespective’?

I think you mean ‘Specifically’

I think you mean ‘Partly’

Do you mean ‘referring to’?

Do you have to?

Where or what’s a ‘ballpark’?

Where’s that come from?

‘Unique’ is all you need

What do you know really?

I’ve a window in my diary

I’m looking out onto the garden through mine

I hear what you’re saying

But I’m not really listening

Do you mean ‘Listen’ or ‘Pay attention’?

If you’ve paid for it, you’ve ordered it

Ah, either someone you’ve never heard of or someone who’s past it

Someone you’ve never heard of

I think you mean ‘Should have’

It’s either ‘free’ or it isn’t

At this moment in time

At the end of the day

Take it to the next level

Do we have to?

That’s even worse than ‘Amazeballs’

Your call is important to us

Via Twitter, Bernard Pearson has reached out to me and come up with these extra suggestions for our list. I’d say he’s smashed it, wouldn’t you?

Passionate about my job in stationery

You’re alright (How the Dickens do you know)

Death of Democracy (it's an ideal, not your pet cat)