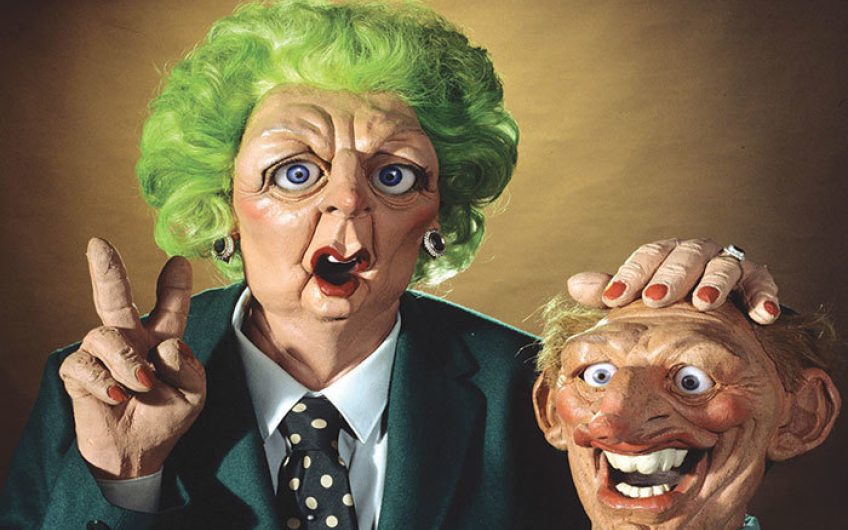 On the site of the original workshop that housed Spitting Image, the 1980s TV scourge of the establishment, stands a monument to Thatcherism and capitalism: Canary Wharf. Thirty years ago it was a group of dilapidated banana warehouses, home to a quasi art-school populated by young creatives often straight out of college, learning on the job about caricaturing, modelling and puppetmaking, under the paternalistic gaze of the show’s creators – Peter Fluck and Roger Law.

Three decades on, the Cartoon Museum celebrated the show’s legacy with its exhibition Spitting Image: From Start To Finish. Beginning with Fluck and Law’s early days as political cartoonists, it traces their evolution into three-dimensional plasticine modellers, creating vivid political tableaux for magazines – and finally charts their creation of the puppets that featured in the TV gallery of grotesques. A few, such as Margaret Thatcher and the Queen, are on display. Many, like their subjects, have perished.

I was lucky to have been involved with the show from the outset. Producer John Lloyd, fresh from the triumphant Not the Nine O’Clock News, was looking for new writers for the fledgling TV puppet satire show. He approached Ian Hislop at Private Eye, who suggested myself, as a cartoonist. I had admired Fluck and Law’s plasticine work for years. So we began sending in scripts – and worked on the show from episode one.

The first series, which began in February 1984, was a shambles – perhaps not surprising given the complexity of the enterprise. Writers, impressionists, caricaturists, modellers and puppeteers all had to be harnessed in creating a sketch show which, being an ITV half-hour with ad breaks, didn’t have any time in which to establish itself. Also, the show didn’t know what it was – sketch show or sitcom? As the chaotic first series progressed, it became clear that the puppeteers hated the scripts and the scriptwriters hated what the puppeteers were doing to the scripts – ruining punchlines by mugging for the camera. The only people who hated the show more than those involved were the critics.

What everyone could agree on, however, was the brilliance of the caricatures. Fluck and Law had assembled a talented team of protégés, including Oldie cover artist David Stoten from Mad Magazine. The caricatures saved the day. Viewers loved the rubbery gargoyles as much as their victims disliked them.

At the end of Series One there had to be change. To Roger Law’s dismay, the show lurched from being essentially political to embracing celebrity culture. It was to prove the show’s salvation – as celebs were mocked as never before. Whereas impressionists like Mike Yarwood had fondly mimicked their subjects, Spitting Image went for the jugular. Toupees, facial blemishes, inability to act – all were ridiculed. On the back of the celeb input viewers became more familiar with the cast of the cabinet – bovver boy Norman Tebbit, ice-cream-cone-head Douglas Hurd and blubbery Chancellor Nigel Lawson. Likewise the opposition – Welsh windbag Neil Kinnock, slobbery Roy Hattersley, and the SDP, in the varying sizes of Davids Owen and Steel. With the Royals providing regular support, the show suddenly had a following and a growing notoriety.

‘Spitting Mad!’ screamed the Sun, when it was revealed that there was to be a (very affectionate) puppet of the Queen Mother. Mock tabloid outrage was the order of the day. Also making the front pages was a sketch reference to Princess Diana having a nose-job when she gave birth to Prince Harry (a tiny detail leaked to me by a schoolgirl contemporary). Suddenly we were making news – and viewers rose to more than 15 million.

By Series Three the show was flying. The writing was more sympathetic to the puppets, the impressionists (including new comedians like Harry Enfield) caricatured voices rather than just mimicking – and the result was a show that was must-see TV. Politicians wanted to be on it. A hopeful Jeffrey Archer sent in voice tapes.

Five years later Ian and I were burned out by the relentless treadmill of production. Our writing commission had risen to over 20 minutes a week. Script editors Rob Grant and Doug Naylor had moved on to write Red Dwarf, John Lloyd was producing Blackadder and was replaced on Spitting Image by the late Geoffrey Perkins. We had created specials with David Frost for NBC (a shocked executive said to us ‘Are you suggesting that President Reagan is an… asshole?’) – and in 1987 we had co-written the highlight of our career in rubber – a live election show that ended with our version of Cabaret’s ‘Tomorrow Belongs To Me’. One critic said that had it been on the BBC there would have been tanks around Broadcasting House.

This radicalism was at complete odds with the advertisements and merchandising that Spitting Image was also churning out to keep the studio going. (The dog-chews, board game and slippers feature in the exhibition.) Syndicated shows opened all over the world. Premier Yeltsin liked the Russian version – but Putin was of a mind to have everyone shot.

Ultimately, as the UK show lost viewers (weak governments, boring ministers and the declining novelty factor), it became too expensive and was axed in 1996. The writing and production was vastly superior to the early days, but its time had come and gone.

Spitting Image launched countless careers and increased political awareness among the young, who suddenly knew who was in the cabinet. It also fostered a degree of cynicism about celebrity. Yet what was once a hotbed of recidivists and mischief-makers is now, in Docklands, a shrine to suits and bankers. Perhaps it’s asking too much of a puppet show to change the political landscape. After all, Sooty and Sweep never managed it.

Turner – down by the riverside