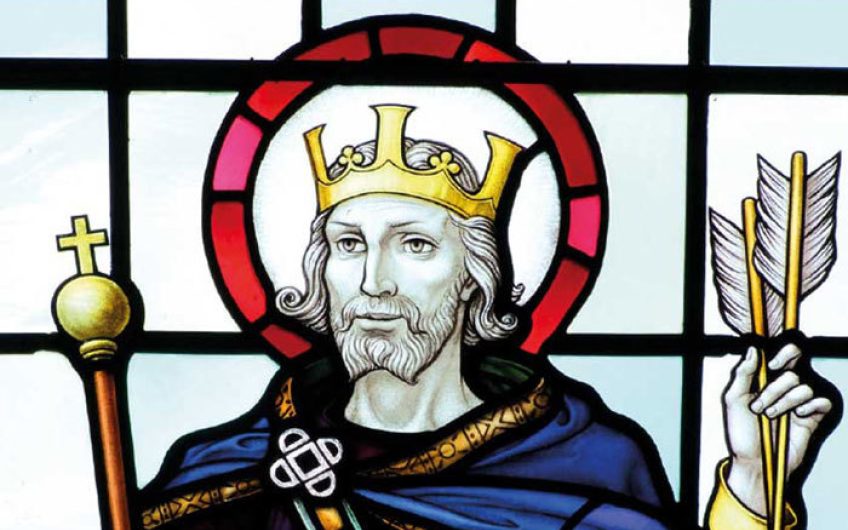 On St George’s Day,William Cook says it's time to celebrate another saint – St Edmund, who ruled East Anglia, bashed the Vikings and could be buried under a Suffolk tennis court

Saint George’s Day is on 23rd April. Every time his feast day comes around, I wonder why England puts up with having such a rubbish patron saint?

Saint Andrew, Saint David and Saint Patrick are intimately connected with Scotland, Wales and Ireland. Saint George never set foot in England – if he ever existed at all. We have to share him with a dozen other countries, from Malta to Montenegro. And to top it all, we used to have a perfectly good patron saint all of our own.

Saint Edmund was born in 841AD, crowned King of East Anglia in 855, and fought alongside King Alfred against the Vikings. Captured by the Danes in 869, he was offered the chance to remain a puppet king if he renounced his Christian faith. Edmund refused. So the Danes tied him to a tree, fired lots of arrows at him and chopped his head off. He died on 20th November, which remains his feast day. According to his biographer, Abbo of Fleury, his head was miraculously reunited with his body, aided by a talking wolf. It’s easy to mock the miraculous aspects of his martyrdom, but the details of his life are not in doubt. And, unlike Saint George, he actually lived (and died) in England.

Edmund was killed near Bradfield St Clare, an ancient village in Suffolk, and in 902 his body was taken to nearby Bedricsworth, where King Athelstan established a shrine in his honour. This shrine quickly became associated with healing miracles. In 1020, King Canute founded a Benedictine abbey on the site. This abbey became a place of pilgrimage, and Bedricsworth became Bury St Edmunds. Edmund was soon established as England’s patron saint. During the Middle Ages, his shrine became a must-see destination, as popular as Canterbury.

He was only usurped by Saint George thanks to Richard the Lionheart, who adopted that Palestinian upstart while he was gallivanting around the Holy Land on one of his expensive crusades.

Even after he was replaced by Saint George as patron saint of England, the cult of Saint Edmund endured. Visited by pilgrims from all over Christendom, Bury St Edmunds thrived and Edmund’s abbey became one of the most important and prosperous in Europe. That all changed with the Dissolution of the Monasteries. This immense abbey was demolished and Edmund’s shrine destroyed. Yet there was never any mention of what became of his body. There’s always been speculation that the monks reburied him in an iron coffin, in a graveyard in the abbey grounds.

There’s never been a proper excavation but, as Bury St Edmunds prepares to celebrate the millennium of its ruined abbey in 2020, plans are now afoot for an exploratory dig. The logical place to start is under some dilapidated old tennis courts. Wouldn’t it be wonderful if Saint Edmund was discovered underneath?

‘His significance is that he was a person of deep faith,’ explains the Reverend Canon Matthew Vernon, Canon Pastor of St Edmundsbury, the cathedral that stands amid the abbey ruins. ‘That’s exactly why the story survives. In Suffolk, there’s always a bit of a campaign running along, and it pops up at different times of year, to make Edmund our patron saint again – Edmund for England. Certainly, we regard him as the patron of Suffolk, and East Anglia. It’s all myth around Saint George. We might not know much about Edmund, but we do know he was a historical figure.’

Edmund’s body was last inspected in 1198, and found to be uncorrupted. He remained here for three centuries years thereafter, until Henry VIII took a shine to Anne Boleyn and made himself head of the Church of England. ‘There’s a wonderful mystery about what happened to Edmund then,’ says Vernon. Some say he was taken to Arundel, some to Toulouse – but the most popular theory is that he’s right here, in the abbey gardens. Since the recent discovery of Richard III, under a car park in Leicester, this fanciful idea seems more plausible.

It’s a treasure hunt, an academic endeavour and an encounter with something sacred. It comes at a moment of renewed enthusiasm for shrines and pilgrimage – something that’s always been marginal in the Anglican tradition.

‘I think there’s a re-emergence of interest in the other, in the mysterious – and places are key to that,’ says Vernon. ‘Holy sites are significant because we relate to sites and locations.’

And few holy sites in England are more significant than Bury St Edmunds.

‘I’m not going to be too disappointed if we don’t find Edmund – Bury St Edmunds continues to be a wonderful place, and the site itself continues to be sacred,’ concludes Vernon.

But I’m sure he’d be delighted if they do find him, beneath those tennis courts in the abbey gardens. Maybe then he’ll finally be reinstated as the rightful patron saint of England.

The Victorians – the greatest architects in British history