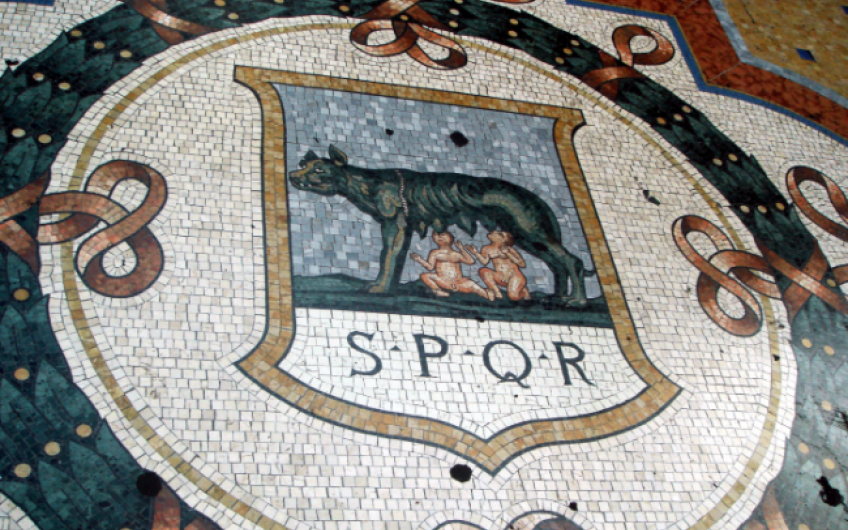 'Tattoos are becoming more intellectual,' opined the Old Un in November's issue, and told the story of reader Luke Douglas-Home's 'carpe diem' body-work. 'Do any other Oldie readers have high-minded tattoos?'

Growing up, of course, such things were frowned upon. The only civilised adult I knew who had a tattoo was my South African 'uncle', who had the horns of the buffalo on his forearm (a drunk experience which he always claimed he had regretted from the start).

'But aged eighteen, I saw Gladiator, and – so help me – I was blown away by it, my knees up round my chin during the battle scene, an impact not one bit deflected by the presence of a beautiful young tennis-player who (to keep the sword-and-sandal theme going) looked like Liz Taylor doing Cleopatra. I still have full-size Gladiator posters from the cinema.

So when, a couple of autumns later, it came to my (inevitable?) moment of middle-class white-boy self-destruction, I found I already knew what I was going to get: Russell Crowe/Maximus's legionary shoulder tattoo, 'SPQR': '(For) the Senate and People of Rome.'

I didn't want a Celtic cross like every other punter. Nor a Chinese symbol which turned out to mean 'canned fruit'. And anything Egyptian (I was reading Egyptology) would've looked plain hippie, however erudite.

If nothing else, I figured, a cluster of letters (technically, an 'initialism') which had prevailed for 2,000 years was probably not going out of fashion anytime soon. It was also one of the earliest literary/historical images I remember recognising, courtesy of the first frame of the Asterix books. More earnestly, it spoke to the simplicity, strength and loyal comradeship of the Roman phalanx. (In later years, I never considered the old and vigorous insignia of my own military regiment – perhaps because I knew that folk would take it seriously.

What's more, tattoos hurt – or so I'd been assured – so I wasn't going to start with anything too massive and/or multicoloured. (The novelist Anthony McGowan informs me that the Samoan word for 'coward' is the same as 'unfinished tattoo'.) Back then, also, I thought I might become an opera singer, so wanted something small enough to cover with a plaster.

My Classicist friend Stella sourced a reliable image for me (this was pre Google Images, at least as far as I was concerned), and I kept it in my wallet for a good while. But on or about my 21st  birthday – the start of second year – I took myself to the tattoo shop on the Iffley Road in Oxford, just past the West Indian restaurant. If memory serves it cost me about fifty quid, and the tattoo wallah offered no critique of my selected emblem, except to say ‘Been watching Gladiator, have we?’ I cheerfully admitted that I had.

Unlike Big Russ, alas, my arms have never really done the tattoo justice. And it is now accompanied by an irritating (but quite faint) scar from all the jabs I had before deploying to Afghanistan.

For a few years, every time I went home my mother would ask when it was 'going to go away' (or similar). To this day, friends who holiday in Rome are wont to send me photos of the city's manholes, which, being civic works, still bear the selfsame logo. And, for a few months, I shared a locker room with a reservist who murmured (reverently, I liked to think) “SPQR” every time I walked past in a state of undress. Aside from that, though, it has largely gone quite unremarked.

When people ask 'Why did you get that tattooed on you?', I say, 'I was too much of a softy to have it branded.' The Gladiator train of reasoning would dictate that if I wanted to remove it I should have to gouge it off – so that, too, is quite unlikely.

Fifteen years since I got my one and so far only tattoo, I have been wondering about another one. I have a great idea for knuckle tatts – but then that really would risk making myself unemployable.

To date, though, Stella herself has the best high-brow tattoo I know of. Lines 304-5 of the Iliad, book 22: 'Let me not die ingloriously or without a good fight; but after some great deed that those as yet unborn will one day hear about.' It's in Greek, obviously.

The consolation of a solitary walk in the English countryside