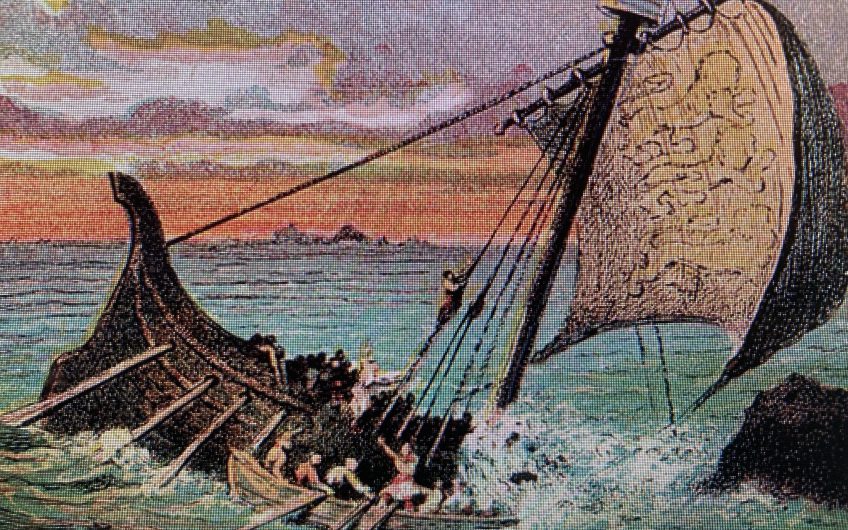 Exactly 900 years ago this autumn, the English crown was rocked by the greatest maritime tragedy ever to afflict this kingdom.

Henry I had quickly brought the overmighty aristocrats of England to heel, and had established financial discipline by founding the Exchequer, still in existence today. He had also stolen Normandy from his older brother, leaving him to languish for the rest of his very long life in jail.

Recently – finally, after four years of fighting – Henry had defeated the greatest of his many enemies, King Louis “the Fat” of France. He forced Louis to recognise Henry’s sole legitimate son, William Ætheling, as rightful heir to the family’s Norman dukedom.

In late November 1120, Henry arrived in triumph at Barfleur, the port in Normandy commonly used as the springboard for voyages to Southampton. He was surrounded by the great men and women of his court. Several of his 22 illegitimate children led the throng of aristocrats, accompanied by famous knights and the mighty bureaucrats that further underpinned his power: men who he had promoted from obscurity to oversee the efficient governance of his realms either side of the Channel.

Richard FitzStephen, the skipper of a splendid vessel, the Blanche-Nef, stepped forward to greet the king. He proudly recalled how his father had served King Henry’s own father, William the Conqueror, as captain of the Mora, the flagship of the Norman invasion fleet in 1066.

FitzStephen now sought the honour of serving as Henry’s captain in his ship that possessed power to match its beauty: it had fifty oarsmen to supplement the wind in her sails. But Henry – ever practical and organised – explained that he had no wish to alter his arrangements; so he declined the invitation. To lighten FitzStephen’s disappointment, Henry conceded that it would be fun for William Aetheling, along with others of his children born out of wedlock, to enjoy all that the Blanche-Nef had to offer. “Blanche-Nef” translates into English as the White Ship.

The King set off first for England, leaving the White Ship to follow later that night. The prince and his party delayed their departure, preferring to give Henry a head start while they set about a huge quantity of wine. They shared it with the crew, who were drunk before the White Ship set off.

A sea voyage was seen as a dangerous endeavour by the medieval mind. The waves were viewed as impenetrable hiding places for terrors, real and imagined. Writers speculated about a menagerie of deadly sea creatures, lurking beneath. These were thought to include sea elephants, sea dragons, sea wolves, even sea goats. And, beyond these fanciful beings, there were rocks ready to crash through the finest of hulls.

When monks came to bless the White Ship before it sailed, they were chased away by revellers on the vessel. To God-fearing contemporaries, this would be viewed as the moment all would be lost.

Soon after casting off, the ship struck the Quilleboeuf Rock, still visible at low tide off Barfleur today. Passengers were tipped into the icy water, to die.

The prince was spirited away by his bodyguards in the one rowing boat available but screams for help from a half-sister persuaded him back. As his men rowed towards her, many of those drowning desperately clung to the skiff’s side, taking it and the prince down. One man survived, whose recollections added colour and immediacy to the ghastliness of it all.

When Henry I was informed of the catastrophic loss of his children, and of many of greatest subjects, he collapsed, screaming. They say he never smiled again, during the remaining 15 years of his life. Whether or not he ever produced another smile, he certainly never produced another heir. The result of the shipwreck was civil war.

There was a time when the tragedy of the White Ship was so well known that historians apologised for excavating the hackneyed tale once more.

Winston Churchill devoted a moving page to it in A History of the English-Speaking People. While he curiously confused the identity of the initial survivors, he luxuriated in the scarcely credible heartbreak contained in the death of the king’s heir. “This was more than the agony of parental grief,” Churchill wrote. “It portended the breakdown of a system and prospect upon the consolidation of which the whole life’s work of Henry stood.”

When, in 1905, H.E. Marshall wrote Our Island Story for children, she gave a roll call of the great moments in England’s history from the arrival of the Romans to the death of Queen Victoria. Her chapter on Henry I ignored many of his achievements, while focusing on the White Ship. In what was a drums-and-trumpets history of England, there was room for the melancholy of this terrible tale. Indeed, it was an essential part of the study of the Middle Ages.

I was born in 1964 and Our Island Story, for all its factual creakiness, was still being deployed in the classroom by teachers eager to ignite a passion for the past. The White Ship was one of my favourite tales, and I assumed it was known to all.

It was just over five years ago that I learnt otherwise. I received a frantic call from Alison Weir, the historian. Could I get from Northamptonshire to Maidstone, immediately? She was hosting an international group of history enthusiasts on a tour learning about the queens of England. Their speaker at their final dinner, at Leeds Castle, had dropped out – could I stand in?

Alison has spoken at my literary festival several times; it was time to repay the favour. I composed the speech in a café in Maidstone, and realised that so many of the personalities I would talk about would be well-known to them – Boudicca, Lady Jane Grey and Elizabeth I. I mixed in a few of the more obscure queens, including the consorts of James I and James II, but realised I still needed to add to the brew. I reached for the White Ship, which ended the direct male line stemming from William the Conqueror, leaving Henry I determined to be succeeded by his daughter Matilda, the ‘nearly-queen’.

It provoked an extraordinary reaction: during the Matilda section of my talk, the audience changed from the polite nods at the bulk of my speech to genuine interest in the drama I unfurled for them. It was new to nearly all of them.

A few months later, I repeated the talk, and provoked the same reaction. I realised that I was from the last generation to be taught this period of history as a standard part of my education. Since then, history has spiralled down from a guaranteed part of each student’s curriculum, to a minor discipline that is quickly optional. For history teachers to remain in a job, they have to dish up Henry VIII and Hitler.

With my last book, on Charles II’s great escape at the end of the civil war – hiding in his oak tree, and all – I offered to give a talk about it at a boarding school I have a family link to. “Please do!” said the wonderfully upbeat head of History; “but we don’t actually teach the Stuarts…”.

For eight-and-a-half centuries, this tragedy was a stalwart part of education. ‘No Ship that ever sailed brought England such Disaster’, wrote William of Malmesbury soon after the White Ship went down.

That remains the case, nine hundred years on. But sadly few today know much about it.

The White Ship by Charles Spencer, published by William

Thomas Becket's murder – my return to the scene of the crime 850 years on. By Ferdie Rous