The art of Thomas Rowlandson 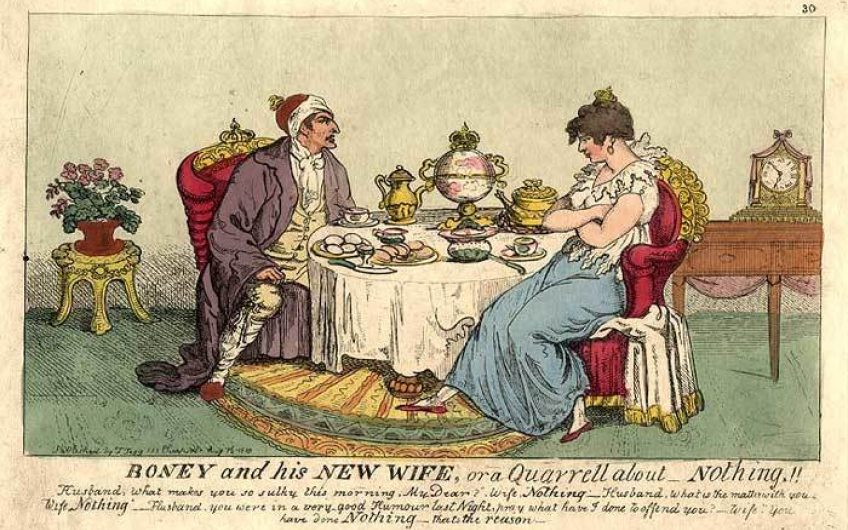 Boney and his new wife
View Full Size
1
of 1

I’m not sure whether the same is true of other nations, but the English delight in finding themselves comic. Punch, Private Eye, numerous films, radio and TV programmes and millions of cartoons show this is true. The joke is, we are absurd.

Rowlandson was born in 1756 and studied sculpture and painting in Paris and later at the Royal Academy. Clearly a talented artist from his early childhood, he was a distinguished student, winning a silver medal for sculpture. It is not clear how he swerved from Fine into Comic Art, but when he was only 21 he published his first satirical print. He went on to become one of the most popular, brilliant and prolific artists of his time. He created hand-coloured etchings satirising leading politicians and aristocrats and beautiful drawings of ordinary life. He travelled all over Europe and England, drawing town and country life both high and low. Unlike his great contemporary and friend James Gillray, 1756–1815, whose work was touched with bitterness and savagery, Rowlandson’s work is good- natured and has an affectionate, tolerant quality, even at its most satirical.

Writing in Lilliput in 1953, Neville Wallis put it very well: ‘The cursive roly-poly line he developed is as distinctive as his types – paunchy bon viveur, lean miser, rustic oaf and damsel with a bodice as free as her favours and a soldier in attendance.’

Rowlandson’s satirical prints were not published in newspapers or journals but sold individually in print shops. They were designed to be studied over and over again and were frequently collected in albums or kept in folders. They are full of delicately drawn details of interiors, clothes, streets and subtle – and not so subtle – facial expressions. They often contain coded messages, such as a cat and a dog curled up together in front of the fire, meaning the household is peaceful and happy; or the Prince of Wales’s feathers casually stepped on, suggesting that the Prince is in trouble.

Most of the work exhibited and, by the way, excellently reproduced in the informative catalogue, comes from the Royal Collection. It was bought enthusiastically by George IV and other princes and dukes at the time, and Queen Victoria and Prince Albert greatly enlarged the collection in the later 19th century. Sadly, they also decreased it by having a large number of erotic prints and drawings destroyed. Luckily, much of Rowlandson’s work in this mode survives elsewhere. It is so lively and comic that today it would not offend. It is a pity, nevertheless, that none of it survives in the collection: it is not a major part of the artist’s life work, but it is important. Were it there, an absence of prudery could be added to all the other pleasing qualities of his work.

Rowlandson was more than a brilliant caricaturist, satirist and comic genius; he was a great artist. Neville Wallis ends his short essay: ‘Every artist of any power has a particular contagion. The contagion one catches from Rowlandson’s drawings is wonder at his abounding vitality and buffoonery oddly conveyed by the most elegant means.’

Don't let the Moss Side shooting put you off Manchester