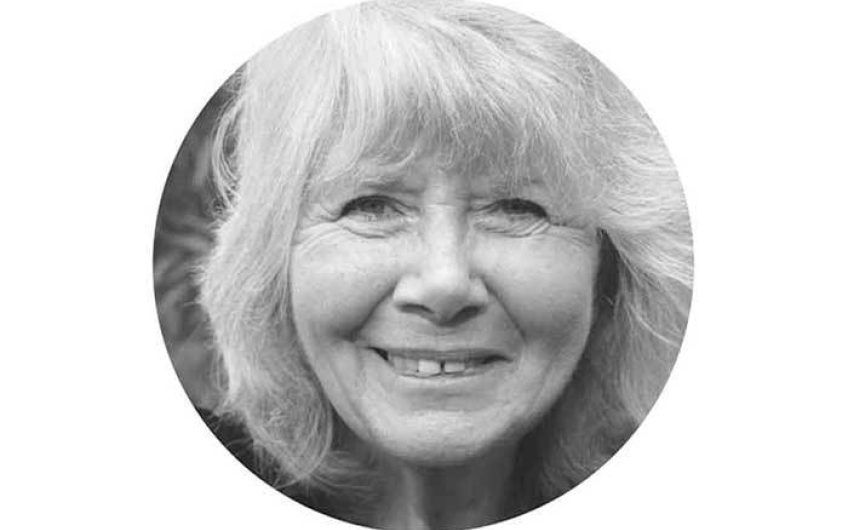 Scent – 24 Faubourg; always a notebook for whatever I’m writing; a mass of biros; about six novels; and wonderful make-up called True Match.

I miss her [she points to Bluebell, the greyhound on her lap]. I have to pack in the wardrobe so she doesn’t know I’m going.

No. Lots of books – and I have bad circulation, so I have hot and cold clothes, masses of knickers and my toothbrush. I like to brush my teeth a lot.

Australia – I was interviewed for a respectable radio programme and the interviewer suddenly shoved a piece of paper over to me:

Nun to Mother Superior: ‘We have a case of VD.’

Mother Superior: ‘Oh good, put it in the cellar. It will be a nice change from the usual Beaujolais…’

Aged about 18, my friend Jacquetta and I went to Majorca and I got off with a telephone mechanic called Angel, the most beautiful man I’ve ever seen.

Where did you do your research for Riders?

Harvey Smith. David Broom took me to the Dublin Horse Show. On the first evening, Harvey said to me, ‘Ee, love, in those dungarees you’ve got a bum bigger than Ted Edgar [a showjumper].’

For Polo, which grounds did you go to?

I went to Palm Beach and stayed with the England captain Julian Hipwood and his wife. I met Donald Trump. He didn’t chat me up – I thought I was looking rather good that day. After that I went to Argentina – the Argentine men are absolutely divine...

What trainers did you meet for Mount and Jump?

Nicky Henderson and Paul Nicholls. Up at Newmarket they were all lovely people: the lovely one, Henry Cecil. Hughie Morrison helped me write an explosive speech delivered by Rupert Campbell-Black in Mount.

Which concert halls/opera houses did you go to for Score! and Appassionata?

The Royal Scottish National Orchestra took me on tour to Spain and they are wild – they do their wonderful concerts and then they get legless till about two in the morning.

Are you writing a book about football? Is Tony Adams advising you?

It’s going terribly, terribly slowly. Tony Adams is absolutely adorable. Leo [Cooper, her husband who died in 2013] would be banging on the ceiling of heaven that I’m not writing about rugger.

I like going to football matches – I support Tottenham.

To Wootton in Norfolk to the Red Cat pub and all Leo’s cricketing friends came and looked at Leo’s new wife in the evening.

Have you really stopped going on holiday?

I haven’t been on holiday for 22 years.

Where did you use to go with your late husband?

Leo and I went to Amsterdam to do a piece on the sex scene there. It’s extraordinary – they have churches and children’s schools next to brothels.

I lie all the time everywhere: when I say, ‘How lovely to see you’, I don’t really mean it.

Do you have a daily routine?

I work at night in bed. I read in the morning. I have a tangerine for breakfast, then do all the things Amanda [her PA] says I’ve got to do. I feed the birds a lot, cook Bluebell’s lunch and go back to work again.

Angel the telephone mechanic taught me. ‘Cómo estás y cómo está tu familia?’ means ‘How are you and how are your family?’

Just missing Bluebell. I’m a terrible sleeper, too – I sleep here, just, but never when I go away.

My aunt in Ripon had goats and I fell in love with these goats so much that I was found fast asleep in the goat pen.

Read novels. Leo got Parkinson’s in the new millennium and he died in 2013 – it’s no fun going somewhere unless you’ve got a chum to giggle with.

First of May is known as Jilly Cooper Day:

But of course it do rain

Gilbert and Sullivan and… me