The bird of spring is on the wing 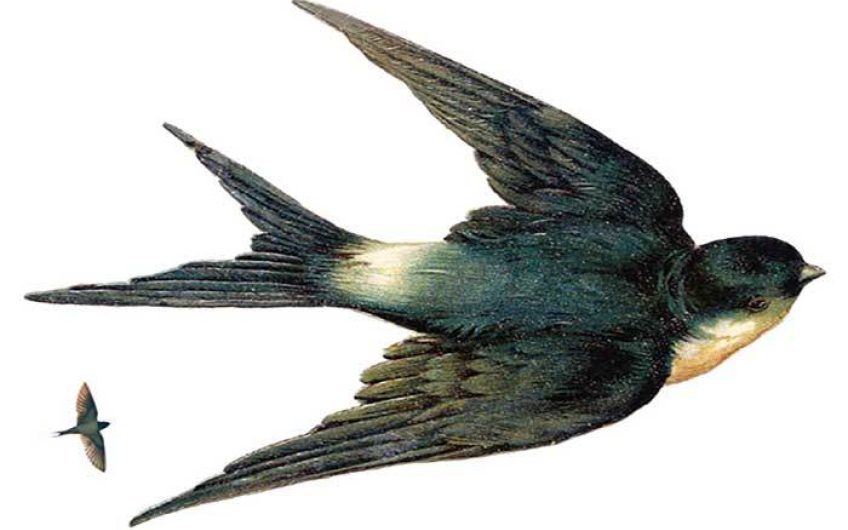 Shake your tail feathers: the swallow in flight
View Full Size
1
of 1

We now bear witness to that stupendous natural marvel heralding spring: the arrival of 16 million migrants – swifts, nightingales, warblers and wagtails – to build their nests and rear their young.

Leading the way is ‘that most entertaining and useful tribe of birds’ (as Gilbert White described them), the fork-tailed swallow, enchanting us with its ‘marvellous agility’ while, more importantly than we can imagine, hoovering up countless legions of pesky flies, midges and ‘other troublesome insects’.

For the past few months the swallows have been vacationing in warm, sunny South Africa with nothing better to do than dart to and fro in exhilarating curves and parabolas, hunting down their similarly effortlessly agile insect prey. Then, just before sunset, they cease their hectic acrobatics, congregating together in their tens of thousands to roost in the wetlands around Durban and Bloemfontein.

‘The air around us stormed with silent wings,’ Horatio Clare writes of witnessing this extraordinary spectacle. ‘Dark whirlwinds funnelling down into the reeds that shook and rattled. The swallows chattered and swayed and then fell silent.’

Come early February, the swallows turn their backs on this gregarious, carefree way of life and, responding to some mysterious signal, head north in small groups on an epic 5,000-mile journey: over the jungles and plains and along the rivers of Namibia, Zambia, the Congo and Nigeria; non-stop across the blistering Sahara desert to Algeria; a short hop over the Strait of Gibraltar into Europe; up the east coast of Spain into France, to arrive in late March over the Kent countryside, hungry and exhausted.

For centuries, the sudden, if most welcome, reappearance of these graceful birds and their equally abrupt departure a few months later ranked among the great enigmas of the natural world. The least likely explanation had to be that, twice a year, these delicate creatures – no bigger or heavier than a filled fountain pen – should make the round trip to and from the southern tip of Africa, cruising at an average speed of 30mph, feeding on the wing.

There is thus probably no greater revelation from the bird-ringing experiments begun more than a century ago than the letter received by ornithologist Harry Witherby from the proprietor of the Grand Hotel in Natal, dated 27th December 1912.

‘Dear Sir,’ it read, ‘Four days ago, a swallow was caught on a farm 18 miles from this town with a metal band around its leg inscribed with the words “Witherby, Holborn, London”. As I am interested in the migration of birds, I would be glad to know if you received this letter safely.’

The further scientific insight into the swallows’ peerless flying skills is more recent. Having refurbished their nests, laid and incubated their eggs, the parents have much to do to feed their hungry brood.

‘Responding to some mysterious signal, they head north on a 5,000-mile journey’

‘All summer long, the swallow is the most instructive pattern of unwearied industry and affection,’ wrote White. ‘From morning till night, they spend the whole day skimming close to the ground executing the most sudden turns and quick evolutions.’ As each horsefly or bluebottle is caught, it is stored in the back of the swallow’s mouth until there is sufficient to meet their offspring’s clamorous needs. This requires endurance, flying up to 400 miles a day (twice the daily distance travelled on that epic migratory journey) at speed if they are to capture their fast-moving, agile insect prey. The swallow also requires the highest manoeuvrability ‘index’ of any bird. Here the swallow’s ‘form’ – that streamlined body, powerful wings and characteristically forked tail – is supremely reconciled with ‘function’.

Those elegantly elongated outer tail feathers of the fork – or ‘streamers’ – by which the swallow is so instantly recognisable, provide its crucial aerodynamic advantage.

The effect of the up and downward movement of the tail in determining its trajectory (just like the flaps of an aircraft’s wings) is considerably enhanced by those outer streamers – first demonstrated 25 years ago by Swedish zoologist Rolf Norberg from an analysis of time-lapse photographs of free-foraging flight.

‘The greater the lift derived, the tighter the turns can be,’ he observed. ‘And thus the more insects the swallow can capture per unit time.’

A technical detail perhaps but, when we watch the first swallow drop out of the sky in a few months’ time, it cannot but heighten yet further our admiration for this most entertaining tribe of birds.

The saddest comedy ever made

The England that Time Forgot - an Oldie photographic series