The book that changed the world 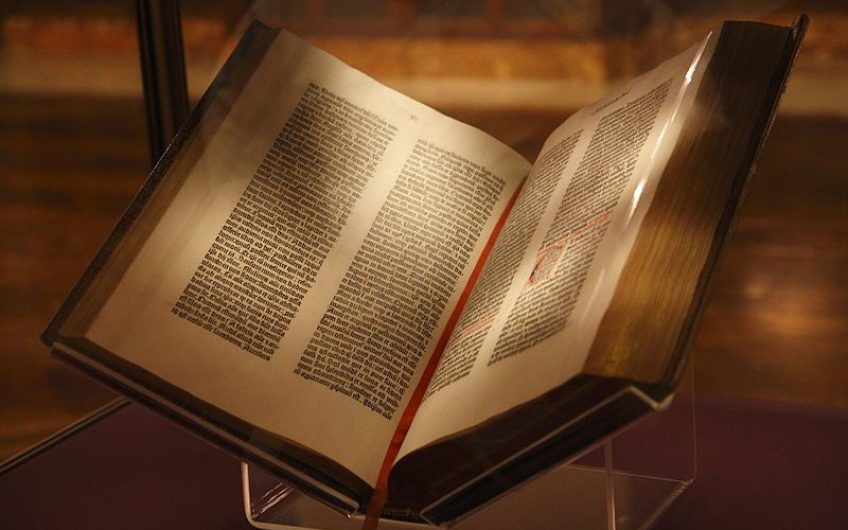 Before Johannes Gutenberg, the way a book got 'published' was by roomfuls of miserable, ink-spattered monks copying things by hand, trying not to go blind, and occasionally pausing to write things in the margins, like 'I am very cold' and 'For Christ's sake give me a drink'.

This took a long time, cost money, and of course restricted output to the sorts of things religious authorities thought ought to be disseminated. You'll have seen The Name of the Rose.

So when Gutenberg perfected his movable-type printing method in his Mainz workshop – what has been called 'the greatest invention of the second millennium' – it was most certainly what Sellar and Yeatman would have called Ein Gut Thing, and his 1454 Latin Bible (putting the Mass into ‘mass production') the beginning of a new age of widespread intellectual discovery, positively churning out 180 copies in the time a scribe might well have taken to produce one.

Not for nothing did a future Pope record, 'I have heard that there was already a waiting list for the volumes, even before the printing was completed.' That the lettering alone was clear enough to read without one's spectacles was much talked about – and the book per se is still regarded as a masterpiece of typographical craft.

Taschen's The Gutenberg Bible offers a complete facsimile (albeit a very posh facsimile) of Gutenberg's 'B42' – 42 lines per page, from a 'Rhenish textual variant' of St Jerome's 4th-century Vulgate – as found in one of about fifty surviving vellum copies, that in the Göttingen Library, a book itself listed in Unesco's Memory of the World programme.

The book is in fact two volumes, pushing 1,300 pages in total, the sort of object which, the publishers point out, 'can only be fully appreciated by modern viewers and readers if they are able to encounter it gradually by turning its oversized pages’.

It is a thing of beauty, packed with exotically illuminated letters, rubrics, handwritten marginalia, library stamps, semi-transparent pages, and all the other arcane perks of looking at original and ancient documents. I spied a smudgy thumb print, a squashed fly, and a stitched-up imperfection in the vellum (around chapter 35 of Exodus, if I read rightly). Whole doctorates, no doubt, can be done on the minutiae of font and typeface in this book alone. Alas, no work-related complaints – at least, as far as I could make out.

To be honest, though, unless your Latin is extremely good – and you've not read the Bible – it's the accompanying 100-page 'booklet' (also lavishly illustrated) that you will really learn from. Put together by Stephan Füssel (the Gutenberg-Chair at Mainz University), this includes brief but detailed commentaries on Gutenberg's life and work, his printing process, distinctive features of this particular edition/copy, the legal and financial underpinnings of the publication, and other food for the determined bookworm.

In 1454, a copy of B42 was priced at thirty florins – or (somewhat cruelly) three years' wages for the average clerk. A price tag of £100 isn’t cheap either; but scholarship, photographic quality and so forth aside, for would-be scholars who don't live close to an exceedingly well-stocked library, that might be worth consideration. (For what it's worth, accessible digital editions are scrupulously listed in the appendices.)

The chronicles of man are not awash with famous printers – but Gutenberg, 'the father of mass communication’, died 550 years ago and he is still what one might fairly call a household name. His invention fundamentally changed the intellectual landscape of the whole world, almost single-handedly midwifing the modern era. 'When it comes to radical revolutions in media,' Taschen's editors say, 'the Gutenberg Bible is up there with the internet.' The very concept of movable type has become synonymous with the free exchange of information: there's even a blogging platform named after it. There is also Project Gutenberg, where tens of thousands of electronic (out-of-copyright) books can be consulted gratis.

In the circumstances, it is fun to note that Gutenberg and his investors went to great lengths to keep his process secret. And, of course, it was the maelstrom of knowledge transfer inaugurated by his Bible that soon enough undermined religion and the control of ecclesiastical power.

But that's another book entirely.