The Bruegels on my bedroom wall 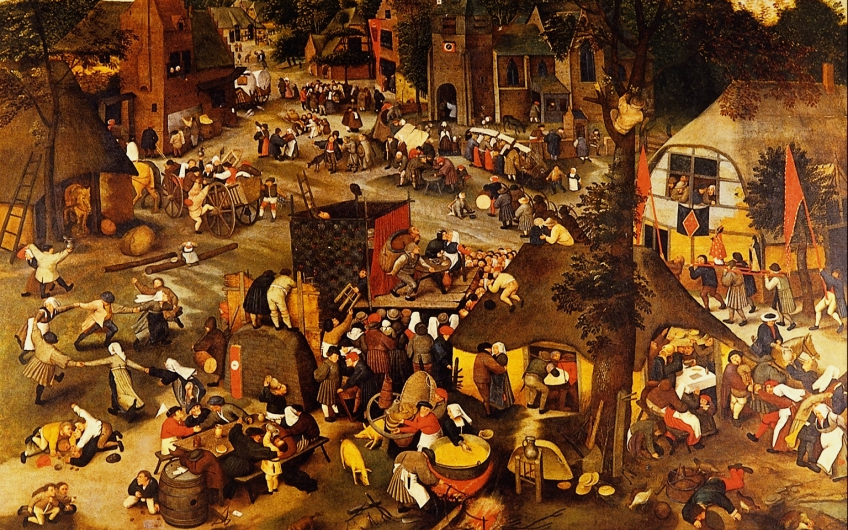 'All artists have touchstone pictures,' AA Gill wrote a couple of years back, in his near-posthumous memoir. 'One of my images is The Vision of St Eustace by Pisanello in the National Gallery. As a child, my father gave me a postcard of it. I pinned it up beside my bed. St Eustace is an apocryphal second-century Roman general and a pagan who, whilst out hunting in the Tivoli Gardens, saw a deer with a Crucifix between its antlers...' And so on.

Now, I'm no artist. I don't really even have a favourite artist. But if I did, I think it might be Pieter Bruegel (or Brueghel (or Breughel)). Either of them.

As a child, I slept below two dusty, wood-board prints of Bruegels – bought, the labels tell me, at Athena International, Bishop's Stortford, Hertfordshire.

The first – the Elder's 'Peasant Wedding' – is innocuous enough. Some people eating poor food, a couple bickering, a child polishing off scraps, pipers piping, a bit of boozing, and a dog. Bruegel, it is alleged, used to dress up as a peasant and attend festivities to get the flavour of the thing.

The Younger Bruegel appears to have been famous as much for copies of his father's work as for his own stuff; so it's perhaps no great surprise they're not dissimilar. The same poor food is passed around; a piper pipes; men drink; there is a dog. But then there's a man passed out stone-cold amidst the chickens. A horse-borne noble seems to commandeer some ale. Five men brawl over a gaming dispute. A woman vomits wine all down herself. Another woman's arse is on clear show. A troop of crossbowmen march past a horrendously crippled man. Someone listens in on a confession. Men urinate against the wall of someone's house. A tableful of men in what might be clerical garb ply a small boy with alcohol. And in the middle of it all a troupe is putting on a play – and two men backstage seem to be stealing all the props.

Earthy, riotous, and, for the most part, fun; all human life is here. And exposure to it didn't seem to do me any real harm. In fact, I hardly noticed them. But to this day the Bruegels still exert a mild influence, and I'm happy whenever I spot a reference somewhere.

Record covers of Carmina Burana (lots of them), or of Fleet Foxes. Auden's 'Musée des Beaux Arts'. In Laughter in the Dark, Nabokov's lead, Albinus, appears to pitch the idea of animated Bruegels to a film producer (who tells him no, astonishingly). And Jean-Claude Lebensztejn's art-history monograph Pissing Figures: 1280–2014 features Bruegel 'pissing against the moon' (a Flemish proverb) no fewer than three times. There's also a trio of Bruegel statues in Brussels, by Tom Frantzen, two of which feature plays on Bruegel images; the third – 'Bruegel at Work' – inviting you to stand beside the artist himself and look out through the frame at what he might be painting. (There is a monkey on his shoulder, doing likewise.)

Among the detritus on my desk there is an advert ripped out of The Oldie last year, for a Bruegel exhibition at Bath's Holburne Museum – and it was this that more-or-less coincidentally led me to TASCHEN's new blockbuster Pieter Bruegel: The Complete Works XXL publication. Marking the 450th anniversary of the Elder's death (on September 9th next year), and the opening of a four-month Bruegel the Elder show at the Kunsthistorisches Museum in Vienna next month, The Complete Works incorporates all 39 paintings, 65 drawings, and 89 etchings, in super-lavish hi-def, and some foldoutable – which, given that you could spend hours peering at the minutiae of each one, is what you're after, really. (Have you ever noticed the brickworks at the Tower of Babel?). This is surrounded by more erudite exegesis than you can shake a stick at, from his seasonal landscapes to comparisons with Hieronymus Bosch, as supplied by Jürgen Müller and Thomas Schauerte, of the University of Dresden and the Nuremburg Museum, respectively.

The Elder Bruegel's time and place of birth remain a mystery; but for sure he lived through the religious wars of Habsburg Europe, the violent repressions of the Duke of Alba, and the fallout from the Inquisition. Not surprisingly, then, even his superficially bucolic-looking panoramas are riddled with references to vice, brutality, and his attitude towards the Catholic Church. As for his The Triumph of Death, with its sword-wielding skeletons, massacred marine life, and zombie lurchers eating people's babies, such that Don DeLillo once described it as 'a census-taking of awful ways to die' – well, at least I didn't have that up on the wall when I was six.

Horace, Rattigan and me - Lindsay Johns