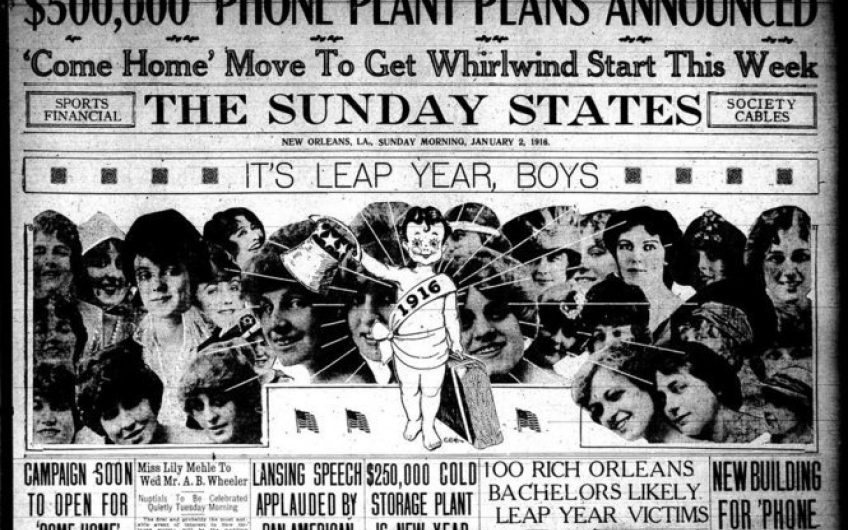 My husband has always called me his ‘child bride’ because we were married two months before my 11th birthday. Now, 25 years later, I am about to celebrate my 17th birthday at the age of 68.

Leap years, also called intercalary or bissextile years, come about because the Earth takes about 365¼ days to orbit the Sun. If we left those quarter days to mount up, after a century the calendar would fall behind the solar year by 25 days. Eventually, December would come round in the middle of summer.

Julius Caesar invented leap years in 45 BC, when he gave the last month in the Roman calendar, Februarius, an extra day every fourth year to make sure that festivals happened more or less at the same time each year. In those days, he chose to put it on 23rd or 24th February rather than the last day of the month.

Leap-year traditions allow women to behave like men. A comedy written in about 1600, called The Maid’s Metamorphosis, claims ‘This is leap year – women wear britches.’ Now a more common tradition allows a woman to propose marriage only in leap years on 29th February. Once proposed to, the man can refuse but has to pay compensation to the lady. Depending on which tradition you believe, the rejection fee is £1, a kiss, some silk or a pair of gloves.

Gilbert and Sullivan also used leap years as a theme in The Pirates of Penzance. Frederic, the young hero, born on 29th February, is horrified to find out his apprenticeship with a gang of pirates has to be served until his 21st birthday, rather than when he reaches the age of 21. This means he is not free to marry his love, Mabel, as he is bound to serve the pirates for another 63 years. The Pirates of Penzance premièred in New York on 31st December 1879, just missing the next leap year by one day.

When men find out I was born on a leap day, they tend to congratulate my husband for having to buy me a birthday present only once every four years. But he doesn’t get off as lightly as that. I can have my ‘unbirthday’ either on 28th February or on 1st March; so if he forgets one of those days, he can still make it up on the other. Sometimes I even get to celebrate on both days. Usually we stay up until midnight on 28th February, chink our glasses together and toast my happy unbirthday, which is over in the blink of an ey

There's only one thing for it – a shopping trolley!

If it sounds Russian, it must be Shostakovich