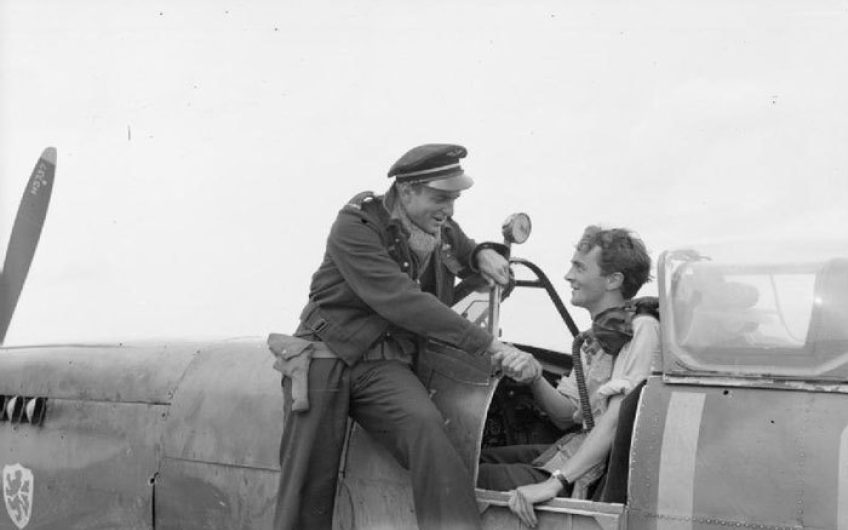 What must all those years after the war have been like? The years as a civilian engineer. The years as a Member of the French Parliament. Even the years as best-selling author – 3 million copies of your book sold and still counting.

Despite the honours and a coat-full of medals and everything else, nothing could live up to being in the skies – with life and death pressing in every minute. Nothing could compare with the feeling of zooming off into the blue sky and hunting the enemy. Just you and them.

Clostermann was born in Brazil to a diplomatic family. When the Second World war broke out, he didn’t get into the French airforce. Perhaps the fact that he’d been just a commercial pilot in LA put them off. But when France fell, he was accepted with open arms into the RAF as part of the Free French. And he became a sensation.

It was really hard to shoot down even one enemy aircraft. Most pilots died before a single kill. But not Clostermann. He got his first two kills in one single day – the 27 June 1943. Other successes followed.

By the end of the war, he claimed 33 kills, but that’s a number that has generated a fair amount of comment. Whatever the case, and even if his figures were a bit lower, he was a phenomenon. A victor.

He was so good that the French wanted him back and he was posted to a boring HQ job. He couldn’t live with it and moved back to the RAF and active service. It began to look as though he was on borrowed time and past his best. He sustained a horrible leg injury. He had to bail out after a stunt went wrong. Perhaps he was destined to not get through the war.

But he did, and much public acclaim followed. But it was never the same as being in the skies. His memoir, The Great Show, was heralded by William Faulkner as the finest aviation book to come out of WWII. And it is. At one moment, we get Clostermann weeping in his cockpit for friends lost. At another, he is living life to the full on his leave breaks. His book is an awe-inspiring look into the life (often short) of the fighter pilot. Friends come and go. Heartbreak becomes normal and still he continues, flying an incredible 432 sorties. His luck holds and he survives.

As he says goodbye to the war and the thrill of it, he reflects, ‘I had that morning gone to say my farewells to Broadhurst and to the RAF. I had made a point of going to HQ at Schleswig in my 'Grand Charles’. Coming back, I had taken him high up in the cloudless summer sky, for it was only there that I could fittingly take my leave. Together we climbed for the last time straight towards the sun. We looped once, perhaps twice; we lovingly did a few slow, meticulous rolls, so that I could take away in my fingertips the vibration of his supple, docile wings.’

He was complex. The war left scars that no one else could see. He denounced the Gulf War and war in general. Age had changed his mind about certain things, perhaps.

Pierre Clostermann was a genuine hero. Perhaps we might spend a few minutes in a gentle thank you to a man who mastered the skies but found it hard to come back to earth.

The return of Knives Out. By Harry Mount

All roads lead to Watling Street