The dilemma of a painter's granddaughter 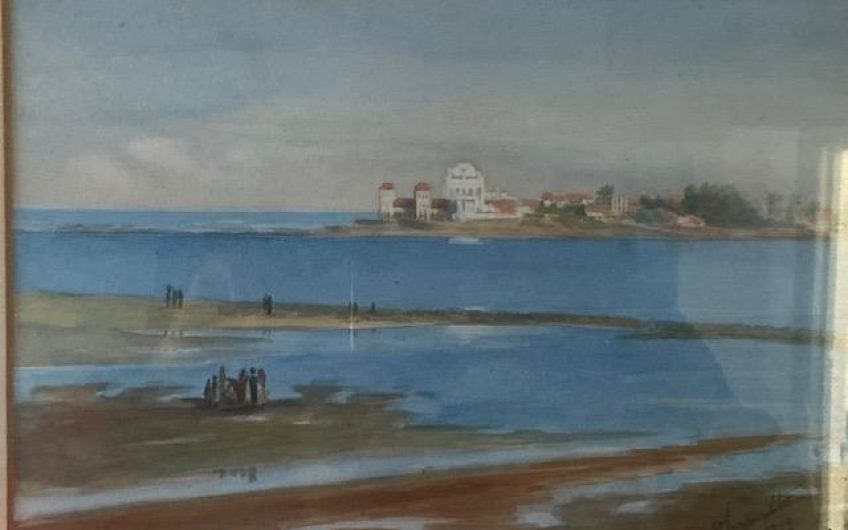 Where do you put the cherished paintings by your grandmother if there's nowhere to keep them? Bella Thomas came up with the answer

My grandmother, Margery Swynnerton, grew up in the Indian Himalayas.

Her father, Fred Swynnerton, a portrait painter, had gone to India (from Liverpool) in the 1880s in the belief that he could make a fortune painting “Rajas”. (He had received letters from his brother, a parson in the Bengal ecclesiastical society, which described how wealthy (and colourful) the Indian elite was and how profitable they might be to paint).

Struggling, as Fred was, to find painting commissions in Liverpool, and though he was en route to Rome to join another brother who had established himself as a sculptor in the Italian capital, he thought he’d first try his luck in Simla, the British Raj’s so-called summer capital.

While then on what was supposed to be a short visit, he fell for a part-Armenian, part-Italian, part-English young lady from another painterly family who were well-established in the region, and married her with very little prelude. From then on, the journey to Rome remained a distant dream. Whenever his luck ran dry, as it sometimes did, Fred would often speak with regret about the aborted journey.

My own childhood was full of my grandmother, Margery’s, stories about the Himalayas. The family was not part of the British administration, and so they lived more precarious lives than some British in India. Artists did not appear to occupy an elite position that they can today – or could (perhaps in Rome). Although Margery once, at the age of 4 in 1899, sat on Lord Curzon’s (the Viceroy’s) shoulders when she won a fancy dress competition, at Viceregal Lodge, in a mermaid outfit sewn by her mother and her ‘ayah’, her family appeared to live on the fringes of British society: they lived in the summer capital through the winter too.

When income from painting proved intermittent, my grandmother’s mother opened a boarding house on the outer reaches of the town, in a large wooden building with generous verandahs overlooking Mount Jakko. It was known by the improbable name, Bonnie Moon: (perhaps it was a ruse to attract honeymooners from Delhi?).

When she reached the age of 17 in 1911, there was no question that Margery would need to find work to support herself, and she chose to train as a nurse in another Himalayan hill town, Dehra Doon. And to her dying day, my grandmother was ashamed of her Armenian lineage (or preferred not to mention it) no doubt because the British were peculiarly snobbish about mixed ancestry.

A story which amazed us, as children, because it seemed to link us so directly with the distant past, was that our grandmother was able to recall the moment she heard the news of Queen Victoria’s death in February 1901. Margery was then a girl of 6. She remembered the day clearly because her canary had died that very morning, and she and her mother had been distraught. Suddenly various people (a neighbour, a cook) stormed into the room at the same time, both exclaiming repeatedly that the “Badshah” was dead.

“There was turmoil all round”, Granny wrote in her memoir. “Even for us small children,” she continued, “it seemed a terrible calamity…. I cannot remember when it was that the canary turned into Queen Victoria…. but we proceeded to give the canary an elaborate funeral with animals and polished flummery in some sort of procession in the hills behind our house”. Proof that mnemonics – linking, in this case, the canary and the Queen - make a memory reign longer.

A film of the Empress’s funeral was later displayed in the local Town Hall, which was the first time anyone in the town had seen moving pictures. My grandmother’s observation was that the film showed that it seemed to be perpetually raining because of the grainy quality of the film. It was her first picture of England. She was right about the rain.

Margery died in 2000, aged 105, becoming one of the few human beings to live in three centuries. Her life took in some of the dominant events of the twentieth century in an unusual way. She became a nurse (a VAD) in the First World War on the Eastern Front in Mesopotamia (modern Iraq) and between 1916 and 1918 served in Basra and Al-Amara, scenes of much sacrifice and even torture in World War I. She saw countless numbers die. (A few of my grandmother’s watercolours are of Staff Headquarters in Basra 1917, with the Euphrates glowing in the background).

At the end of the war, she developed Spanish flu but survived. She had a protracted convalescence in Bombay in a large sports hall converted into a make-shift hospital to cope with the epidemic (which killed about nearly 100 million other people all over the world). After her father died shortly after in 1918, the family (the widow, Louisa and three of her children) decided to go “home” to Britain in 1919, (although none had ever been there, least of all her mother). Margery’s mother (who ended her days in a house off the Harrow Road) painted a last ecstatic vision of Bombay in 1919, from the boat as it was leaving the port.

Margery took her nursing career further at Bart’s Hospital, London, in the 1920s. A few years later, she took up a nursing job in Lagos, Nigeria, and then Ghana, where she met her husband, Hugh Thomas (a colonial servant), and thereafter lived much of her life in Accra on the “Gold Coast”. Because of the high incidence of malaria in West Africa, they were not allowed (by the Colonial Office) to have children with them, so her son, also called Hugh (Hugh Thomas, the historian of the Spanish Civil War), was, to her distress, obliged to stay with her in-laws in a sleepy vicarage in Cambridgeshire. Like so many colonial families, she had to choose between her husband and her child. First she felt her duty lay with her husband. Four years later she returned to England to bring him up herself (and alone) in various villages in Hertfordshire, later rural Kent, and finally Folkestone. In term time she ‘commuted’ back and forth to Accra from Liverpool, and once overland across the Sahara, by bus.

In all these places, she painted prodigiously: market scenes, garden scenes, the odd portrait, and mainly flowers and some detailed observations of West African plants. As the offspring of artists, it was instilled in her from an early age to make visual recordings of her life as she saw it. Some unusual water-colours of market places in Basra and Al-Amarah overlooking the Euphrates remain. There was even a sketch of the canary-queen in her notebook (drawn years after the event). Her final 40 years off the Gloucester Road in London were less eventful, but she painted many a still life of flowers positioned carefully beneath the odd African mask or porcelain Buddha.

One of the challenges of descending from a family of painters is to decide what to do with the large number of canvases, notebooks, film footage and painted ephemera that they have left behind and have treasured so carefully. Had they been celebrated artists, you might be tempted to sell. But artists who are interesting because of their unusual journeys in life, and because of the joints between you and their past, have no market. The charity shop might not even take them. What should one do with these links with the past when you’ve no room left in your attic? The odd descendant might want them. Then again, in the era of Marie Kondo minimalism, they might not.

When our father died, aged 85, in 2017 and we had to empty his ample house in Notting Hill, the pain of these kinds of decisions – some long overdue - became intense. What to do? Could not some archive be given them? But where? Otherwise it was the bonfire or the skip. Even Marie Kondo might have some sympathy.

Among them were the 4 decaying pictures of Folkestone street life and a thought occurred to me. Shall I look up to see if Folkestone has a museum? It did. It turned out that it – or the acquisitions manager - would be interested in them, as a record of how Folkestone looked in the 1950s. It struck me that I could interest such a museum with other ephemera from my grandmother’s past as a testament of an unusual life marked by history – portraits of her as a child in 19th century Simla by her father, Fred, or of her passing through these faded or vanished, epochs: portraits of breast-feeding local ladies in the market place of Accra, gardens in Nigeria, Himalayan scenes, photograph albums of crossing the Sahara in the 1950s.

They may not be great art, but as museums become more interested in ‘women painters’ and perhaps even of nurse-cum-painters, or paintings by “ordinary” people in history, perhaps, just perhaps, it could be the best destination and the best solution. I began promoting my grandmother as someone who had lived in 3 centuries on 3 continents, survived the horrors of two wars, survived Spanish flu and worked as a nurse and painter throughout.

Suddenly I am aware of how history takes shape after the events have long since passed and the subjects departed. People keep the memory of certain people alive because they think their lives worthy of mention to a broader public - but also in order to find somewhere to put the stuff.

The Queen of Radio, 82, is poached by the Sunday Times

What is the Royal Warrant Holders Association? - John Shepherd

The book that changed the world