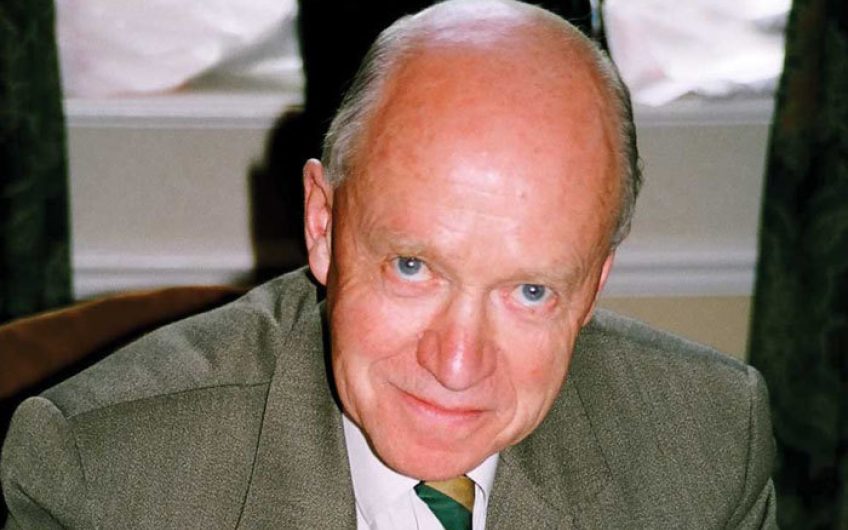 The Oldie is extremely sad to announce the death of Edward Enfield (1929-2019), one of our longest serving and most loved columnists. Richard Ingrams recruited him in 1992, shortly after the first issue of the magazine, at the suggestion of his son, Harry Enfield. He soon became a crucial part of the magazine and remained as a columnist until his 80th birthday in 2009. He will be much missed.

The Perils of Procreation

Ah, the children! There are so many of them. Four, which seems to me to be a crowd. In fact, they are the reason why the house has five bedrooms.

Sitting down six to every meal year after year is something which no one can understand unless they have been through it.

What is it about eating that leads to arguments? And why is it that table manners are so difficult? Why is it so hard to put a knife and fork down when not using them, and so much easier to wave them in the air? How long does it take to learn the trick of eating with a closed mouth?

If I were to look for a common bond between my children, it is that they all eat like savages.

Then there are their friends. When they were little, their friends were also little - little girls in neat pinafores who looked sweet, and little boys in shorts who said nothing and did what they were told. At least I think they were - it seems so at this distance in time.

Now their friends may have rings in their noses, and sprawl about the place and smoke and use foul language and sport Afro hairstyles, or else be skinheads.

When they are in the house I have to keep up a pretence of liking such people, which I am sure does not convince them. What am I supposed to have in common with a hippy female dangling the illegitimate offspring of an out-of-work Rastafarian? Nothing, of course, so why is she doing it on the sofa in our drawing-room?

Occasionally, there is one that is reasonably clean and tolerably presentable, but I cannot say anything nice about him or her because I have not said it about the arrogant Oxford-educated puppy with holes in the knees of his jeans that I felt like kicking out of the front door. If I am nice about one but silent about the other, they want to know why I did not like the other, and if I tell them, they tell me I am wrong.

My son tells me that on television you get sons saying they love their fathers, and what do I think of that?

Well, I think it could only happen in America. I have seen the sort of thing he means, and it goes something like this:

Father. And I love you. Son.

This does not seem to me to be true to life. Much more natural would be:

Son: I love you. Dad. Father: How very embarrassing!

Even this is only half true. Absolute truth would require: Son: You’re a bore, Dad. Father: And you’re a liability, Son.

Yet this too has only a superficial veracity. What you actually get is:

It does not do to crack the veneer of civilisation which must overlay family life if it is to remain tolerable.

A Plague of Prurience

What the arts need just now is a good dose of censorship. I said this to my sister-in-law, who is a woman of a liberal turn of mind, and not quite knowing how to deal with this illiberal idea, she said: ‘Who would do the censoring?’

This seems a very easy question to answer. Any reasonably sensible person could do it, and if no one else wants to, I will, and I will do it for stage, cinema, television, books and anything you like.

First of all I would censor out all cruelty. There are some human tastes which are so beastly that they ought to be starved, and the taste for cruelty is one of them. I never go to films about the navy in the days of sail because I know they will flog someone; or about the Middle Ages because they will torture someone. Under my regime that sort of thing would stop.

After that I would cut out all nudity, obscenity, blasphemy, indecency, and any jokes that failed to make me laugh. The result would be that I would be hailed as the saviour of the British film industry, as all films made in this country would be made to the standard of Chariots of Fire, and be immensely popular both here and abroad.

Imported films, by the time I had finished with them, would be almost incomprehensible, and therefore not worth importing, to the further benefit of the British industry and the balance of payments.

This infallible formula for success consists in giving people what they actually like, instead of forcing upon them stuff that other people with twisted minds choose to supply.

If my son could be persuaded to explain this to the television moguls with whom he associates, I am sure they would see the point, and I could start tomorrow.

Plagiarism is a funny thing.

‘You have pinched my plot!’ says Prof Lodge.

I pinched it from Mrs Gaskell, where you pinched yours.’

Love Island is the new face of Britain in America

A Celtic prayer in difficult times