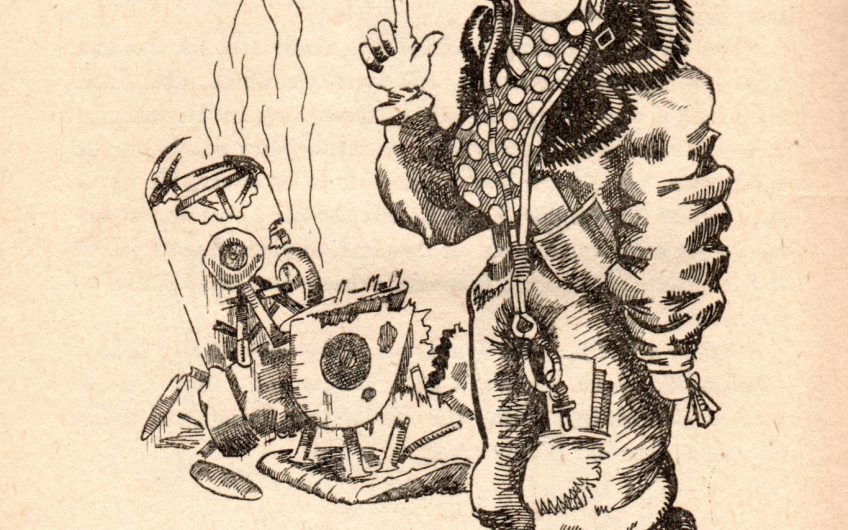 I first came across Anthony Armstrong at a jumble sale in 1980, when I picked up a book of his short stories called The Pack of Pieces (1942) and bought it for about 20p. It was love at first sight and first reading, with quirky line-drawings by John R. Parsons and the author’s mischievous dedication:

WITHOUT WHOSE KINDLY ADVICE AND

CRITICISM ALL OF THESE STORIES,

INSTEAD OF ONLY EIGHT, WOULD HAVE

BEEN PUBLISHED IN THE Strand Magazine.

The stories were all riffs (for want of a better word) on traditional fairy-tales, told with elegance, wit, and genuine affection for and knowledge of the genre, with a pantomime vibe. Armstrong took elements from traditional tales and continued them, and so I met (for instance) a princess who, ignorant of the frog prince in her family history, brings a helpful amphibian back to the palace for dinner; the great-great-great-grand-daughters of Queen Beauty and her husband King Beast who get involved with enchantments and suitors; and overweight Sir Borloys, a segment of the Round Table, who encounters the Dark Knight and rescues a damsel from imprisonment in a tower (at least Sir Borloys is under the impression that it’s imprisonment...). The stories always lean towards and achieve the funny, featuring widowed kings with daughters whose upbringing is supervised by bossy great-aunts, and talking mirrors and talking horses which turn out to be princes in disguise.

I discovered later that Armstrong referred to these delightful, hilarious tales (you get the feeling that he enjoyed writing them) as ‘fairy stories for adults’. The ‘adult’ content is simply the knowing nature of the narration. Many of the stories were published as Christmas treats in posh magazines, as indicated in his dedication of The Pack of Pieces.

Searching through second-hand book catalogues in those pre-internet days, I found another volume of Armstrong’s fairy-stories for adults, The Prince who Hiccupped. I also found out more about Armstrong’s long, distinguished and prolific career as a writer.

The list of his books and plays occupies a column in Who Was Who. His first novel was published in 1920, after he had fought in World War I: at one point he was the youngest Captain in the trenches (RE, MC, mentioned in despatches, wounded). He remained in the Army after the War ended, and his writing breakthrough came with his Warriors pieces for Punch, ludicrous tales of Army life chronicling the adventures of Lt Swordfrog, Capt. Bayonet, Pte Pullthrough, et al. (these were subsequently published in book form and remained in print for decades). As a serving officer, and therefore obliged to publish under a pseudonym, George Anthony Armstrong Willis had considered his full name and chosen his two middle names as his nom de plume, abbreviated to AA for Punch.

The moment came when his commanding officer asked him, “Willis, are you working for Punch or the Army?”

“Punch, sir,” he said, and went away to write his resignation.

Thereafter he became a full-time writer, prolific, versatile, and in demand. After he had published 17 novels and countless light-hearted articles, and had written seven plays, he had a huge hit in the early-mid 1930s with his play Ten Minute Alibi, which ran for 18 months in the West End and transferred to Broadway. With his usual workmanlike attitude, Armstrong turned it into a novel and a radio play, and it was also adapted as a film.

World War II began, Armstrong (Willis) was invalided out of the Army reserve, but was soon recruited for a job for which he was singularly well-qualified, to provide a unique contribution to the War effort and incidentally also to the nation’s morale. He was appointed to set up, edit, and write most of the RAF’s new Training Memorandum, Tee Emm, to be published monthly to provide procedural and air safety information. The Air Ministry had taken the decision to produce a training memorandum in order to reduce the alarming number of [avoidable] accidents not due to enemy action (but to inexperience, boneheadedness, etc.). The Air Ministry also realised that the only way to ensure that the new publication was eagerly read from cover to cover was to make it funny. [Can you imagine the Luftwaffe doing this?]

With his armed-services background and his career as a humorous writer, Armstrong was the perfect candidate for the job. He even had Punch connections to draw on for cartoonists. Fougasse provided the cover design, the Tee Emm eagle, a pastiche of the RAF eagle, with pince-nez on its beak and a pen in its talons.

Tee Emm needed a resident source of idiocy to demonstrate what not to do. Armstrong, his Tee Emm colleague RAF staff artist Sgt Bill Hooper (aka ‘Raff’, the RAF’s own cartoonist) and Wing Cdr Joe Stewart put their heads together, and devised the subsequently legendary idiot character, the well-meaning, dim, incompetent Pilot Officer Percy Prune. Raff drew him, button-nosed, insouciant, frequently whistling, and accompanied by his dog, Binder.

Prune was hugely popular. Shortly after his first appearance he was mentioned appreciatively in Terence Rattigan’s play Flare Path, and his fame spread beyond the RAF. Armstrong and Raff produced spin-off books, for general consumption, to lift the nation’s mood, about Prune’s adventures at Prangmere Mess, and his colourful ancestry (family seat, Ineyne Manor; family motto, Semper Inanum). Prune was even awarded the Iron Cross, Second Class (Prune never did anything first class), for services to the Luftwaffe.

Tee Emm ran for five years. The first issue was (deliberately) dated 1stApril 1941, and the last issue appeared in March 1946, continued after the end of the War in order to contribute to the training of crews on the next generation of aircraft.

It is estimated that Armstrong wrote about six million words for Tee Emm, working from vast quantities of official material ‘to put the jam of read-ability round the powder of valuable information’ (his words). Armstrong’s name is never given in Tee Emm (he was always simply ‘the editor’), except for the very last issue, where he was allowed to sign off with the composite name Anthony Armstrong Willis. By this time he had an OBE and the rank of Squadron-Leader (RAFVR).

Armstrong resumed normal life at home in Haslemere in Surrey with his wife Monica and their three children. He wrote in the garden studio which the family called the Alibi Hut, since its building had been funded by profits from his West End play Ten Minute Alibi.

Armstrong’s greatest post-War success was his novel The Strange Case of Mr Pelham, on which the 1970 British film The Man Who Haunted Himself is based. It starred Roger Moore in two roles as a man with a Doppelgänger, and is now regarded as a classic, with arguably Moore’s best performance on film.

When Armstrong died in 1976, obituarists were hard-put to do justice to his career in the number of words they were allowed. Much was written about his literary success as well as his heroic contribution to Tee Emm. A gift for humour had rarely been put so effectively to such a serious purpose. Air Chief Marshal Sir Ralph Cochrane added his own tribute in a letter to the Times:

The Air Force owes AA a very great debt for

achieving the near impossible, no less than

suggesting that the Air Ministry – that great

distant ‘they’ at whose behest aircrew were

risking their lives – had a sense of humour

and in spite of its remoteness might even be

considered to be fighting the same war.

and the Tee Emm front cover design by Fougasse